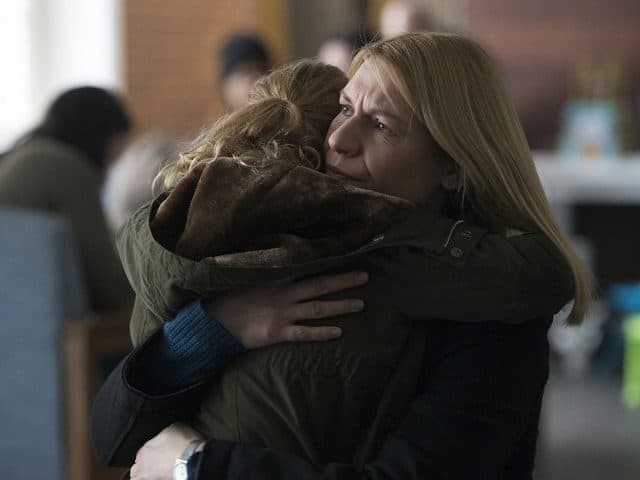 We’re in the home stretch of Homeland Season 6. Tonight’s episode, “The Flag House,” is the first of this season’s final three episodes, and while there are no major reveals (ones that we didn’t know about before anyway) or shocking deaths, this week’s Homeland still remains a tension-filled installment from beginning to end and nicely sets up the last two hours of the season, which should feature all the fireworks that fans have of the show have been waiting to see over the past 10 episodes.

What “The Flag House” does best throughout its running time is remind us just how deep and wide Dar Adal’s influence is, as his actions not only stop Carrie from signing the affidavit that would put him in jail, but they also cause President-elect Keane, who has been such an impenetrable force emotionally throughout Season 6, to finally reach her breaking point. Keane’s breakdown comes after Dar and O’Keefe release the commercial they cooked up a couple episodes ago, featuring actual footage of her son, Andrew, right before his death and comments from his fellow soldiers that paint Andrew as a coward and fraud. I mentioned this in my review of last week’s episode, but everything involving O’Keefe and his team’s constant personal attacks against Keane brings back memories of the terrible election cycle that we just went through in 2016. No matter who who you voted for, there was one thing all Americans could agree upon: the 2016 election became less of a debate about the actual issues and more of a character assassination on both fronts, and that’s the same type of strategy we’re seeing from the Real Truth team in “The Flag House.”

Furthermore, the activities of O’Keefe’s minions also serve as a timely representation of what we currently face in the United States right now. Division between political parties has never been worse, and more often than not, people will use whatever sources they can, whether they’re fake or not, to push their agenda instead of actually looking at the facts. As Max observes the operation room of O’Keefe’s company, he witnesses just how sick and twisted the motivations of these individuals are; they’re catering to people’s worst impulses and trying to appease them from an emotional standpoint instead of an intellectual one, and when it comes to politics, nothing could be worse.

Well, what could be worse is the punishment that Max will face in next week’s episode, after he’s caught with having a phone on the operations floor. The last we see of Max in “The Flag House” is him being taken away by security, but he was able to send the video of Dar Adal meeting with O’Keefe to Carrie’s computer before his actions were discovered. Judging by what happened to Conlin, I’d say Max doesn’t have the greatest odds in the world of making it out of that building alive now that O’Keefe’s people know what he’s up to, but maybe Saul, who sees the video before Carrie has the chance to when he stops by her house while she’s gone, will be able to find a way to help him.

In a way, Saul helping Max would be returning the favor, since Max’s footage appears to be the “smoking gun” that will keep Carrie from having to take down Dar by signing that affidavit. While it’s still unclear if Carrie would actually go through with going on record about the cover-up in Berlin, due to the fact that Frannie remains in foster care, this bit of evidence that Max provides ensures that she doesn’t have to, and you can bet that Saul will use this video as some type of leverage in next week’s episode of Homeland.

Will the video be enough to take Dar down, though? Since his work with O’Keefe breaks federal law, it should be, but even if it’s not, thanks to his talk with Mira, it looks like Saul is here to stay, to keep fighting the good fight, no matter what it costs him. While Saul’s initial impulse to run makes sense (plus, it’s fun to watch him utilize his old spy tactics with Mira), him actually going through with it would betray everything we’ve come to know and love about his character over the past six years. Saul has always put the country’s interest above his own, no matter the cost, and hopefully, he’ll be able to take down Dar without forcing himself out of the CIA because I don’t see how Saul remains a main character on Homeland without being a part of the agency.

And while Saul might have a “smoking gun,” Quinn is the one holding an actual gun at the end of “The Flag House,” and he’s pointing it at the Man Across the Street, the man he’s tracked down and finally gotten the better of for once this season. He makes sure Carrie is there so that she can see the man who was watching her, the man murdered and framed Sekou. But will Carrie actually let Quinn pull the trigger, or will she advise against it? Is the Man Across the Street a necessary culprit that must be brought in for the case against Dar Adal, or is he too dangerous to be kept alive? Homeland leaves us asking ourselves that question, as “The Flag House” cuts to black, but no matter what Quinn’s next move is, it’s guaranteed to make the final two episodes of Season 6 even more intense than tonight’s installment.

Carrie finally reunites with Frannie, and Quinn and Max have major breakthroughs in their investigations in an exciting episode of Homeland.