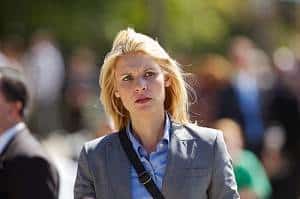 Homeland reintroduced good old Dick Johnson, whose name brought Jessica to fits of giggles last week, now brought Brody one step closer to carrying out a terrorist act against the United States. Vice President Walden paid an overly anxious Brody a visit and asked him to run for Johnson’s seat.

When Brody wanted to see Carrie, I had hopes that maybe he would want to share with the CIA what plans Nazir has for the United States. Yes, I am that naive. Instead he took the opportunity to ensure there’s nochance the media can find out about them. Carrie sure as hell isn’t going to tell anybody in the CIA,and she ensures him Jessica will never know. Since he knows fully well she already knows he and Carrie had sex, what does that mean? He said goodbye to Carrie, and she said good night.

Brody really wants Nazir to know he’s moving forward with the plans, because he even brought Jessica’s boyfriend Mike into it, asking him to speak on his behalf. He thanked him for raising his kids while he was away and said he and Jessica had done nothing unforgivable. It felt like he was wandering around righting wrongs in preparation for his death. Given the nature of terrorism, I suppose that could be on the horizon.
Meanwhile, Saul and Carrie have found some damning evidence against the Saudi diplomat helping Walker get information. He canoodles with other men in a bathhouse. As Saul said, “Being Gay in Saudi Arabia is like being the anti-christ here.” They had video and photos of the diplomat and attempted to use them against him. Sending woman with the information on his clandestine activities was brilliant. Saul told Carrie to ‘Eviscerate the mother

I have to say, there is nothing worse than an uber hairy man being photographed naked in a bath house. He’s 700,000 in debt, but makes 170,000 as a diplomat. He doesn’t believe in radical Islam and loves the west, yet he continues to work with Nazir. Carrie was sure she had him, but he called her bluff. ‘I suck cock and I love it. Yummy yummy yummy yummy…Put me on CNN, I don’t care. I’ll admit to everything.’As he was walking away, Carrie pulled out her last card. His daughter was a Phillips Merit Scholar, attending Yale. The diplomat loved her most of all and when Carrie threatens to deport her, to make sure she would have no choice but to “go back to Saudi Arabia and get fat and wear a burka for the rest of her fat and miserable life,” she had him. 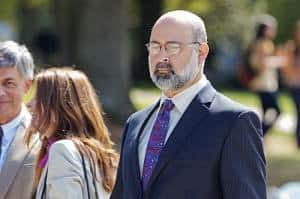 For Nazir he keeps his ears open and tells them what the Saudi Arabian government is thinking. He was crying. It made me wonder, does he have any more of a choice in what he is doing than the others? Granted, he is being paid for his part in the plot, but what could he really lose other than money? He was obviously a family man, but once he spilled to the CIA, he’s bait. Carrie and Saul promise they will never share what has been discussed, but he works for the CIA now. His life was miserable going in, and will be miserable going out. There’s not a safe place for him in the world any more.

Homeland doesn’t beat around the bush. The team prepares to take Walker down, but it doesn’t go as planned. As agents try to get a look at the man carrying a briefcase in a public park in Washington DC, they see nothing. A sniper is in position, but instead of taking down one man and ruining their chance for information, they let the man walk right up to the diplomat. Walker, watching from afar, detonates a bomb, killing five and wounding Carrie.

With this episode, Homeland raised a lot of questions. Brody kept saying that if he doesn’t run for office, he could be pulled back into Iraq. Would they really pull him back in after 8 years of being held captive? It seems unlikely. Imagine the public outcry at sending a POW and hero back to the battlefield.

Brody can seem so damned normal, but nobody knows what is inside his brain. I felt this especially when he said he would always be grateful that Mike took care of his kids. What does he want now? To protect his own children or act in vengeance against Issa? Could he really think that terrorism on our home turf would be at the hands of someone other than the radical Islam, if it was they who turned him into a terrorist in the first place? Why not stop it before anyone else could get hurt. Some innocent, like Issa?

In the end, Carrie is in the hospital, and Jessica is watching the horror of the incident play out on television. Brody walks into the house and turns off the TV. Call me crazy, but if my husband turned off news that relevant to our lives, it would raise a giant red flag. His family gave him the okay to run for office. Of course, they don’t know that they also gave him permission to turn against his country.

There is a lot that might be in my imagination. Homeland has been full of surprises. In the last two episodes of the season, we could see a Brody who fights for his country instead of against it. But I’m not feeling that now. I’m also no longer concerned that Saul may have been similarly turned when he was a POW. Not after watching him eat peanut butter crackers in his office. Carrie and Saul only have each other. I think he’s off the list of possible suspects.

Homeland’s “Representative Brody” ended with Brody saying “Service for your country is the highest calling. Sacred and profound.” For what country is he serving now? How long do you think it will take for us to find out?