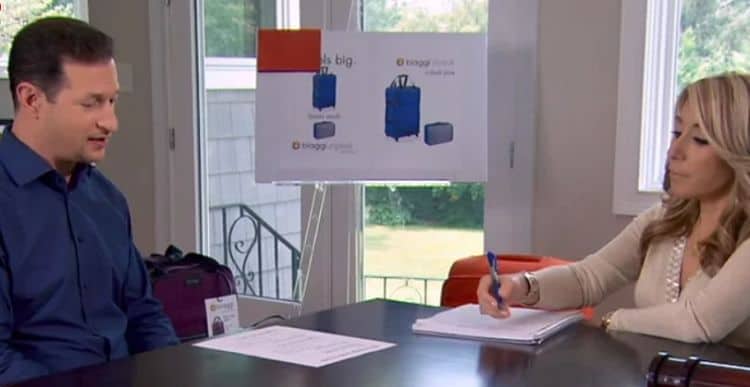 Being on Shark Tank is a dream come true for most entrepreneurs. Since its debut, the series has helped dozens of inventors and business owners make their dreams come true. During each episode, entrepreneurs enter “The Tank” with the hopes of getting an investment from one of the Sharks in exchange for equity in the company. For many people, a Shark Tank deal has provided life-changing opportunities and has allowed their businesses to grow in ways they never could’ve imagined.  Needless to say, Stephen Hersh was extremely excited when his luggage company, Biaggi, earned a deal with Lori Greiner during season six. However, in the time since the episode aired, many people have wondered what became of the product. Keep reading to find out what happened to Biaggi after Shark Tank.

One of the biggest keys to getting a deal on Shark Tank is to have a product or service that solves a common pain point. That’s exactly what Biaggi does. Thanks to Stephen Hersh’s creativity and problem-solving skills, he was able to come up with a product that piqued the Sharks’ interest. According to the company’s website, Biaggi’s origin story goes a little something like this, “The Biaggi story began over 30 years ago, when Ron Hersh from Brooklyn New York and Stephen Chen from Taipei Taiwan joined forces to start a handbag company. Combining Chen’s expertise in product engineering and Hersh’s background in sales and marketing, the new company called Rosetti seemed sure to succeed. The bags looked beautiful and the quality was top notch, but there was one big problem. Nobody was buying them.”

Even though Biaggi got off to a rough start, Stephen refused to give up. After reworking the idea and putting more of an emphasis on functionality, the brand started to gain some traction. Now, “Biaggi is the first luggage brand to create four-wheeled luggage that folds for easy storage. Whether you live in a large home or a small apartment, nobody wants their luggage taking up valuable living space in their garages, closets or spare bedrooms.”

When Stephen entered the tank, he was asking for a $500,000 investment in exchange for 30% equity in the company. Although the Sharks were interested in the product and enjoyed Stephen’s pitch, they were alarmed by the fact that he had already invested $3.5 million in the business. However, both Daymond John and Lori decided to make offers. Daymond offered Stephen $500,000 but asked for 33%. In an effort to prevent Stephen from considering any other offers, Daymond gave Stephen just 20 seconds to decide. Lori decided to swoop in and give Stephen the same offer. Stephen ultimately decided to go with Lori.

What Is Biaggi Doing Now?

After the show was filmed, it was revealed that Biaggi was in serious financial trouble and was close to shutting down. While this could have been an opportunity for Lori to get out of the deal, she decided to stick it out. Luckily, she was able to work her magic and she helped bring Biaggi to $2.5 million in sales almost immediately – largely thanks to her connection with QVC.

Unfortunately, however, we weren’t able to find any specifics on how the company has been doing in more recent years. Like lots of companies, Biaggi may have suffered a bit during the pandemic – especially because travel restrictions essentially eliminated the need for luggage. The good news, however, is that Biaggi is still alive and seems to be doing quite well. The business has more than 24,000 followers on Instagram and has built a very engaged audience.

For those who are interested in purchasing a bag from Biaggi, you’ll be happy to know that the company offers worldwide shipping. Biaggi also offers several bags in several colors, but the product line doesn’t stop there. The Biaggi brand also sells masks and travel pillows so that you’ll have everything you need to make yourself comfortable while traveling.

What’s Next for Biaggi?

There’s no word on what’s next for Biaggi, but it looks like the company has plans to keep growing. Eventually, there will likely be more products added to the lineup. Stephen Hersh also seems open to suggestions on where to take the brand. On the website, he states that people who have suggestions can send an email to shersh@biaggi.com. While Biaggi may not be one of the most well-known products to be featured on Shark Tank, it’s still a success story nonetheless. In the years to come, we hope to see the company continue to thrive by putting out awesome products.