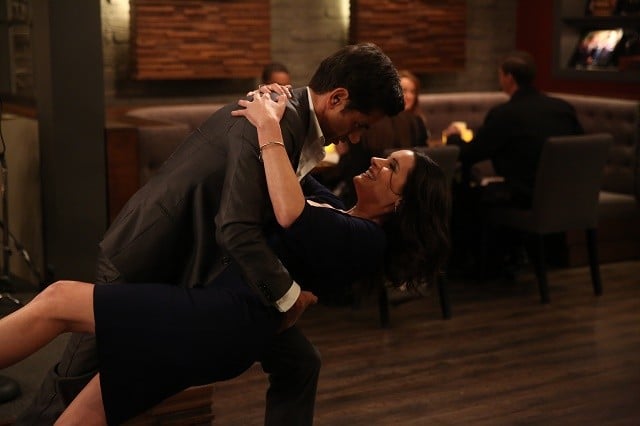 As someone who has stated on multiple occasions that Jimmy and Sara’s relationship is the best part of Grandfathered, I was incredibly excited when I read the description for “The Boyfriend Experience,” and for the most part, the episode did not disappoint. This week’s Grandfathered was funny, romantic, and emotional, and it hit pretty much all the right buttons for me. Having Jimmy and Sara reconnect and recall their past together and mirroring it with Gerald and Vanessa working together to figure out what was wrong with Edie was clever and smart, and it helped lead to one of Grandfathered‘s best episodes yet.

As I’ve said several times before, this show just hits another gear when the focus is on Jimmy and Sara. Their history together, along with the chemistry they still have now, allows Grandfathered to be both goofy and fun but also heartwarming and even quite moving, such as when Jimmy gives his small speech to Sara at the dinner table in tonight’s episode. John Stamos and Paget Brewster light up the screen together, and you really believe that Jimmy is falling back in love with Sara every time they interact, even if he tries to deflect those resurfacing feelings with an insulting remark or a lame joke.

The only problem is, and this is my sole issue with “The Boyfriend Experience,” is that the dynamic between Jimmy and Sara is beginning to feel too familiar, in a similar way to how it seemed like Grandfathered was repeating the major plot points of its pilot over and over in its early episodes. While the interactions between the two of them are still wonderful to watch, these flirty conversations or reflections on the past need to lead them to somewhere different emotionally. So much of “The Boyfriend Experience” plays out exactly like the events in “The Biter,” with unusual circumstances bringing the two of them together, and another guy keeping them apart as Jimmy secretly pines for Sara.

As both Annalise and Ravi state, it’s clear how much Jimmy and Sara like each other, and the Grandfathered writers obviously know that this relationship is one of the best parts of the show. I can understand them wanting to take their time with how their connection develops and how they finally express their feelings, but if you keep repeating the same story beats with Jimmy and Sara, you risk losing the spark that made them so enjoyable in the first place.

Aside from that one minor issue, “The Boyfriend Experience” is pretty much Grandfathered firing on all cylinders. Gerald and Vanessa, who are always at their best when they’re parenting together, are incredibly charming as they try every method they can think of to stop Edie from throwing their things in the toilet. And unlike other times in the past on Grandfathered, when Gerald and Vanessa’s worries about Edie felt really tacked-on, their concern for her in this episode feels real and earned. They’ve never seen their child misbehave in this way, and it makes complete sense to be worried when your kid is acting out and not opening up about why. Of course, it turns out that Edie just wants to feed the toilet because she thinks it’s hungry, but that cute family scene near the end of the episode doesn’t work nearly as well if you don’t have the genuine fear and concern from Gerald and Vanessa earlier on in the half hour.

During the past couple weeks, Grandfathered has done a terrific job at depicting the complicated natures of both romance and parenting, utilizing the strong talent of its cast (particularly John Stamos, who has been marvelous in these past couple of weeks) to great effect. When the FOX comedy doesn’t try too hard with its attempts at humor and wears its heart on its sleeve, it’s the best version of itself. Thankfully, “The Boyfriend Experience” was just that.

Old feelings resurface when Jimmy poses as Sara’s boyfriend in a great episode of Grandfathered.