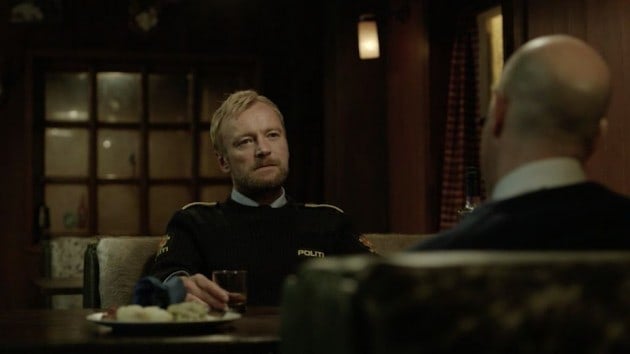 There’s a sour taste in Morton’s mouth, and it’s not just the aftertaste of vomit and lutefisk; after a couple weeks examining the human elements of Fortitude, “Chapter 6” begins to dip back into the supernatural, retracing its steps back to Charlie Stoddart’s death, and somehow managing to make a weird, engrossing mystery even darker, with the reveal that little Liam is responsible for what happened to the poor professor.

That’s the beauty of Fortitude; thanks to meticulous world-building, a plot that would feel like an obvious red herring on another show is able to feel like something much more. Liam killing Stoddart – if it’s true – is a pretty sizable twist, and one that instantly turns Fortitude into something much more sinister. I’m not necessarily buying it – Fortitude really wants us to understand that things are not as they seem, even though it seems Liam knocking out the professor makes no sense otherwise – but “Episode 6” does a fantastic job selling the ruse, detailing the weight (and speed) with which the news affects the town around it. Can the little boy in the hyberbaric chamber be a murderer? “Episode 6” hides those details off-screen in the episode’s flashbacks, either saving the audience from a gruesome scene or hiding an important detail for later; it’s not quite clear, and how Fortitude has been able to build that ambiguity in six episodes, an ambiguity that doesn’t feel contrived or cheap, is impressive.

The one sticking factor is that second bloody shirt (they found Frank’s shirt in the bathroom trash, but there was another bloody shirt in Liam’s room), which isn’t really referenced in this episode; there’s reason to believe that second shirt is a major factor in whatever actually happened when Liam – who was down with a fever, mind you, which Markus reminds us we must feeeeed – climbed out his window and made his way to the coked-out (twist!) professor’s home. That shirt’s conspicuous absence from conversation in this episode suggests there’s something to be discovered there: after all, Fortitude has gone to great lengths to show us that Liam somehow made it all the way across town without a shirt on.

Much of the rest of “Episode 6” is reactionary, as Liam’s quasi-confession makes its way around town, to the grocery store where Markus talks to his increasingly sick wife about the values he tries to give his students. However, there’s one terrific scene that stands head and shoulders above any sequence thus far: Morton and Dan sharing a 20-year old scotch over the story of Pan Am Flight 103 (a crime, which, despite the findings of Scotland’s courts, was never quite solved), which Morton helped clean up after in December of 1988. It’s a haunting conversation, led by Morton’s quote from his partner, who wondered why those people couldn’t have just flied in the air forever, never returning to land: as was with the quiet utopia of Fortitude, an act of violence fractured both forever in irreparable ways. We’re starting to see those cracks form above the ice in Fortitude, and Morton calling out Dan for lying before walking away escalates the tension of the entire season with fervor.

Plus, the performances are incredible: Tucci continues to dominate every single shot he appears in, and Richard Dormer is no slouch sitting across the table from him, either. Dan calling out Morton for trying to tell war stories reeks of the underlying arrogance Dan’s made his forte as he watches over the town and people he makes promises to; and by the same token, Morton pushing Dan further and further into a crawl space lets us watch Dan fold under the pressure a bit, emotions we only normally see when he’s around Elena (and here, are much more meaningful), more subtle revelations that things are hanging by a thread in Fortitude, and maybe people should keep those rifles on them during bear season.

After a few hours that were a little too tinged with what was happening in the bedrooms of Fortitude, “Episode 6” gets back to what’s happening in the minds of people in this arctic town, slowly stripping away layers of reality until it’s like a fever dream, drifting in and out of scenes of Henry seeking out a shaman to protect the Sutter family, and mammoth juice (doesn’t it look like there are two bodies in that shed there?) leaking into the water supply, which may or may not bring us back to the sickness Markus’s wife is dealing with right now (to the point where she can’t even eat homemade soup, which clearly unsettles Markus). Either way, “Episode 6” is Fortitude dialing back up the weirdness, which only makes the shadow-drenched proceedings around town more fascinating, earning the show the “Twin Peaks on ice” reputation a few too many people were endowing it with early on.