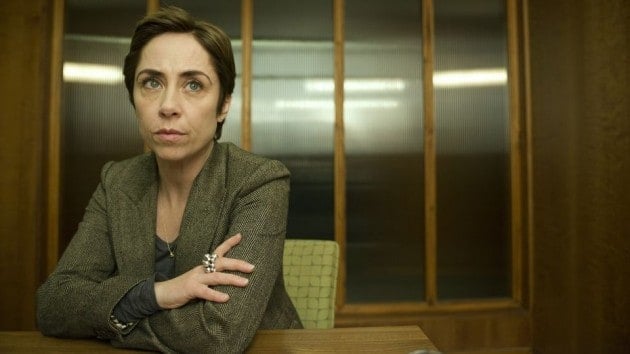 What made Fortitude‘s pilot so engrossing – besides the cinematography and acting, the show’s obvious appeal – was how effortlessly it built its mystery. Mammoths, murder, a touch of politics… the first two hours of Fortitude felt so dense, so lived in, that it was easy to become engaged with the somewhat foggy material; it felt whole, and unique, in a way most new television worlds don’t feel.

“Episode 3”, unfortunately, isn’t able to quite carry that momentum when it begins to reveal what’s underneath the skin of each of its main characters. As “Episode 3” fleshes out the mysterious backgrounds of characters, it appears there are two stems of conflict for the entire show: the debate of the glacier motel, and infidelity. There are wrinkles in these, of course (most involving the murder of Professor Stoddart, the catalyst for the veil of Fortitude being ripped down), but most things boil down to these two stories. Even the mysterious mammoth and whatever is ailing Liam are tied into the hotel, as explained when the townsfolk talk about things that don’t die, or stay preserved in the ice.

However, the darker things seem to get in “Episode 3,” the more overt their explanations become, and the subtleties of the pilot are quickly lost. Thankfully, the strong performances are (mostly) able to carry the load of the intricate social web this hour is trying to build, which is really just “who is sleeping with whom, and who are they actually married to.” The mayor’s being cheated on, the professor was being cheated on, Frank is still cheating on his wife even though it almost killed his kid; everything about the external conflicts in “Episode 3” seem to come from people being naked around each other, which Fortitude again and again explains is just part of living in a town where people run to for inner peace, and it happens to get really, really cold all the time.

This doesn’t make for interesting drama, either around the central conceits of politics, personal vendettas, or supernatural creatures, when everybody is just trying to straighten out who is under the sheets with whom at any given time. What does make for interesting drama is when our outsider DCI Morton pushes through the nonsense defenses people put up, breaking down each person obstructing him from doing his job with precision and a certain empathy that almost feels like kindness. It’s not as if Morton is looking down upon the small town of Fortitude and their copulatory predilections, but there’s a certain humor to how he dismisses the dismissal of others, for lack of a better phrase, that informs the character, and why he was the particular investigator sent to the town (his arrival at the crime scene is easily the episode’s highlight).

Outside of Morton, though, “Episode 3” is too explicitly speaking to the audience, trying to reinforce the ideas that this is a town full of secrets that cannot “die here,” since nothing ever brought to Fortitude can decay. It might work better if the episode focused on secrets based in something other than dumb behavior (the mayor deletes the message Stoddart’s widow was obsessively playing over and over? Could she be any more obvious?) or inability to keep their pants on; when Fortitude focuses on that, it builds a thin layer of betrayal and marital infidelities as its big mysteries, rather than the layered, intertwining web of relationships, regrets, and ambitions that turns a murder investigation into an engaging, complex dramatic vehicle.