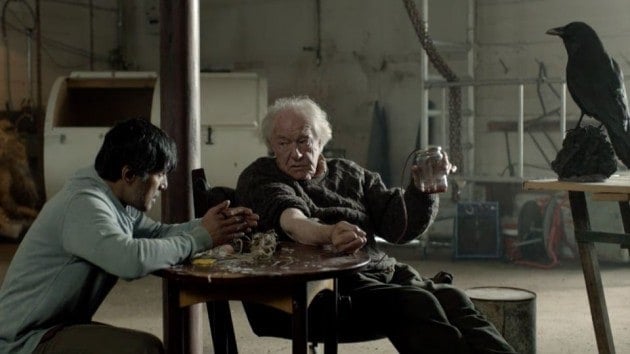 There’s always been a stark contrast in Fortitude‘s cinematography that fascinates me, how scenes can be covered in white snow, yet still be shrouded in darkness, even in the daytime, where everything is just gray, a blend of the two. And the first six episodes have gone to great lengths to establish that gray tone in each individual in Fortitude, a town united and divided by its shared secrets and assumed loyalties. The murder of Charlie Stoddart – and along with it, poor Pettigrew – removed these borders between good and bad; the murder of poor Doc Margaret, shatters the entire reality of Fortitude, instantly transforming it into something that’s a much darker, darker shade of gray.

One fantastic shot in “Episode 7” captures this idea perfectly: when Henry goes into his darkroom to finish exposing the pictures he took the day of Pettigrew’s death, the camera hangs on a single photograph in his darkroom chemicals. What begins as a white piece of paper slowly begins to fill in with bits of gray and speckles of black, eventually revealing two truths: Pettigrew was most certainly mauled by a bear, and he was handcuffed to that beach, suggesting that Dan was really up to something when a drunken Henry stumbled upon them, and put Pettigrew out of his misery.

This doesn’t even rank in the top three disturbing moments of “Episode 7,” but it’s a visual touch that distinctly shows the audience that the story is only slowly coming to light. As Morton digs deeper and deeper into the mysteries around town, the less things make sense. A little boy mauled a man for no reason? Yuri stole police evidence (and handcuffs, which we can assume are the ones Pettigrew were attached to), for a GPR reading he doesn’t even understand? The more Morton digs, the more the complex relationships of the town fold into each other. Nobody’s revealing everything, but there’s a growing feeling that people don’t know what’s going on anymore, and that paranoia is seeping into the town, just as the mammoth water is being unleashed upon it.

So where is Fortitude going? Well, the presence of a tupilaq is a direct sign that an ancient evil of some sort is at play. Unfortunately, Henry’s confidence in his murderer’s blood is going to go over about as well as his friendship with Dan: again, Henry has no idea what  he’s walking into, and doesn’t take the shaman’s suggestion to heart. Henry’s sacrifice is going to turn out to be naught, and will only make whatever is affecting the town more powerful – and it’s so sad to see, especially while he tries to reconcile what he did to the last person in town he trusted. He may be a drunk and an arse, but next to Morton, Henry’s the most moral character on the show, a bumbling idiot whose good intentions lead him to stumble on the worst horrors imaginable (and unimaginable) to humanity.

Which brings us to the scene of the night, when a sickened Shirley puts a fork in her mother, literally. It’s not often a television show can be truly frightening. Shirley regurgitating Markus’s condensed milk (man, that guy is disturbed) into the cavity she created in her still-breathing mother’s abdomen, then carefully placing her skin back into place, is among the most unsettling, horrifying things I’ve ever seen. It’s a testament to Fortitude‘s mastery of pace, how it lulled the audience into believing we were watching a traditional murder mystery with a slightly weird town of people with high-functioning libidos, only to reveal itself as a completely different brand of psychological horror. Go back and watch the previous episodes: Fortitude doesn’t actually show us a murder investigation, even as we’re being told we’re watching one. There’s been hints of oddities here and there, but mostly, Morton’s followed a trail of personal lust and professional lies. With Shirley’s fevered outburst, Fortitude pulls the rug out from underneath the audience in visceral, thoroughly unsettling fashion.

I once posited that Fortitude was a sort of purgatory, a place where people came between life and death – like purgatory, one theoretically can’t “die” in Fortitude, only occupying a space for a temporary period of time. Maybe it is, but one of the fascinating things about “Episode 7” is its suggestion that maybe this is a karmic Bermuda Triangle, one where cosmic retribution for past evils manifests itself in the form of something much darker. That’s the fascinating part about it, though: like Hannibal, Fortitude is using narrative distortion (and audio distortion; the weird sounds of Fortitude are equally terrific) to create a malleable reality enhanced by the suggestion of superhuman darkness (Hannibal’s murdering, whatever was trapped under the ice and has gotten free in Shirley’s bloodstream). It removes any sort of expectation from the show, and lets (and trusts) the viewer to sit back, pay attention, and enjoy the ride – which often makes for the best television. I have no idea where Fortitude is heading (ancient evil rises to fight DCI Morton in Legend of Korra-style Jaeger battle?), but I cannot wait to see where it goes.