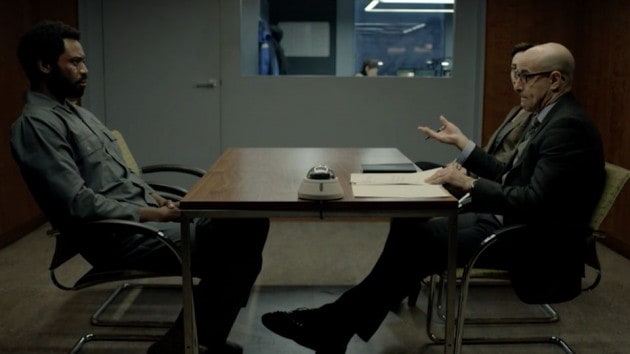 The last two episodes of Fortitude have been pretty standard fare, moving away from the weirder, darker undertones of the pilot, establishing the town and its people in episodes three and four, which essentially amounted to “everyone here has massive skeletons in their closet.” Like those episodes, “Episode 5” is greatly elevated by the presence of DCI Morton – but unlike those previous two hours, “Episode 5” gets back to the disturbing undertones of its first two hours, and it’s all the better for it.

“Episode 5” is constructed around unraveling the first mini-mystery of Fortitude: Elena, who turns out to be Esmerelda, a woman convicted of brutally murdering a man with her lover (via scissors to the head – not pleasant). And by proxy, it begins unraveling Dan, and the two end up switching positions; by the end of the hour, it’s hard not to feel bad for the man who just gave his partner a concussion (and arrested him for murder) and lied to the mayor. Dan is a man who wants to help protect people from their own mistakes – he did so when Henry shot Pettigrew, and as we find out, with Elena when she first arrived in Fortitude, hiding her true identity from the mayor. He’s certainly not a perfect man – his slight obsession with Elena is unsettling, glaring into the screen playing the live feed of her interview with Morton – but there is a twisted nobility to the balance he’s trying to maintain in Fortitude, even if that nobility ultimately is tied up in some deep-seeded emotional issues.

That’s the enigma of each character Fortitude has introduced us to – except Jules; can anyone see Jules as anything but ‘good’ right now? She can’t even help but admit that Elena is beautiful, the most heartbreaking moment of the hour. But she’s the exception to the rule; and part of the intrigue “Episode 5” is able to play off of is the duality of each character involved in this web of Elena’s identity crisis, especially when it begins to unravel. Of course, the most obvious cases are Elena and Dan, who switch roles as empathetic character by the end of the hour (boy, Elena’s whole attitude changes when her true identity is found out; the helpless, sheepish girl who just wanted to break up with Frank falls right away), but there’s been a sense of this with every character, including Markus, who turns out to be a ‘feeder’, and a creepy one at that (trying to feed his wife’s mother whale, and then forcing his wife to eat more and more ice cream later that evening).

With Frank, “Episode 5” is still kind of struggling to justify his behavior, but the touches of his discharge from the war, and return home after five years in Afghanistan, are starting to help define the character further, even as the swelling in his face temporarily erases his physical distinctions (another example of blurring the line between good and bad, then covering it with blood, which seems to be a habit around Fortitude). Clearly, war changed a man like Frank, and he was not the expressive, loving man he was when he left. Fortitude doesn’t have to come out and explicitly say this; the weight with which Frank briefly talks about his experience in the Middle East speaks volumes – and though the emotional and mental trauma of war isn’t an excuse for what he was doing, begin to help form what happened to the man Jules once fell in love with, a necessary step in slowly backing away from him as a murder suspect (heck, even Dan comes to his aid at the hour’s end, rushing to the home to find evidence to clear him and Elena) and building him up as a character again.

Now, in the long run, Fortitude can’t continue to exist in this gray area; right now, the show can sit back and let the impressive range of each cast member capture the shifts in tone and character, as Fortitude slowly fills in the blanks on what happened to Charlie Stoddart, and how that particular moment defined – or, as Elena explains to Morton as she talks about atoms regenerating, redefines – the frozen purgatory that is Fortitude. And while it’s a difficult task to try and dissect where this mystery is exactly heading, the performances and subtleties of “Episode 5” are a reassuring sign as the season nears its halfway point – and with the fantastically relentless Morton as our guide, I can’t wait to see where it goes.