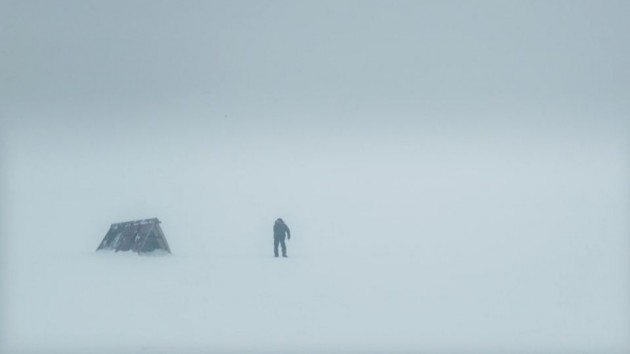 Like the darkness crawling over the town (or whatever’s underneath seeping up to the surface), there’s a growing sense of panic and dread in Fortitude as the poor Doc’s mangled body lays clinging to life in the town’s small hospital. Cameras push closer to characters’ faces, shadows hang longer… everything about “Episode 8” works completely off the shock at the end of last week’s episode, propelling that dramatic momentum with a tense hour following various members of the town as they process the latest tragedy.

Fortitude‘s ever-shifting microscope settles on Markus in “Episode 8” – whose feeder status establishes him as a weirdo (with mommy issues, apparently), but is nonetheless innocent. We may not know why the Doc was attacked the way she was, or to what end it serves (karmic judgment?), but we do know that Shirley, who dies off-screen of a heart attack in the beginning of the hour, is the murderer, not Markus (though it appears Frank still doesn’t believe this, given how the episode ends). As an “outsider,” however, his assumed guilt completely unravels the town, with an angry mob questioning outsiders around town in their vigilante attempts at justice for the violence taking over their purgatorial home – an us vs. them attitude fueled even further when the mayor’s attempts to get forensic help from the mainland falls flat, essentially written off as an old town with no resources to offer the ‘real’ people of the world.

Markus remains an unsettling presence in this episode, but his known innocence immediately turns our attention to the reactions of those around him, meanwhile doubling down on the feelings of isolation every character has (even Markus, whose girlfriend is dead, lest we forget), and the town as a whole enjoys, now that they’ve been shut off from the main land. The shaman is still making his blood-thing, and the anonymous faces of Fortitude are growing increasingly reckless. That complete cluster you-know-what of stress, underscored by the distorted, creeping score, build “Episode 8” into something much more than a typical episode of an investigative drama.

Slowly, it feels like Fortitude is becoming the show True Detective always thought it was: exploring the darkness of human morality through the lens of an intelligent, forward-thinking detective, slowly revealing the central murder mystery to be something more cosmic and disturbing, a horror that exceeded the bounds of humanity and forces our protagonists to examine their very nature as human beings. True Detective started like that, full of wordy dialogues and supernatural suggestions, devolving into a pretty rote, by-the-numbers serial killer story by the end – by the same token, Fortitude started out like any typical murder mystery, and has slowly revealed it to be something much more sinister and unsettling, suggesting that Hilde’s plan to drill into the ice around Fortitude is awakening an ancient evil, a curse or disease that, like any others in the ice, just won’t die.

Sure, Fortitude doesn’t have Matthew McConaughey or Woody Harrelson, but it does have Stanley Tucci and Richard Dormer, whose relationship has become just as nuanced and fascinating as the leads of that other show. Their back and forth with Markus is so revealing: we get Morton subtly declaring his intellectual superiority and Dan picking up on Morton’s lines of questioning, turning the two into a well-oiled questioning machine, putting the pressure on Markus without any of the typical dramatics we see in investigative settings. They may hate each other, but Dan and Morton are two fantastic minds who work well together: in a matter of two minutes, Fortitude not only raised the stakes on its central, increasingly disturbing mystery, but the mind game playing out between Morton and Dan, a man whose power seemingly knows no bounds – Morton suggests that Dan might want a seat as the mayor at one point, something Dan tries to smile away with his pearly whites. As always, Fortitude continues to contrast the darkest corners of humanity and Fortitude with the light: every kind gesture by a cruel person, every white color of snow or the little interior of a home, muted out by an equal (or greater) color of darkness sneaking into the background, the sinister shadows of the past (and in some cases, an ancient, ancient past, or whoever’s in the house Elena is staying in) in the deep, vast darkness at the heart of Fortitude.