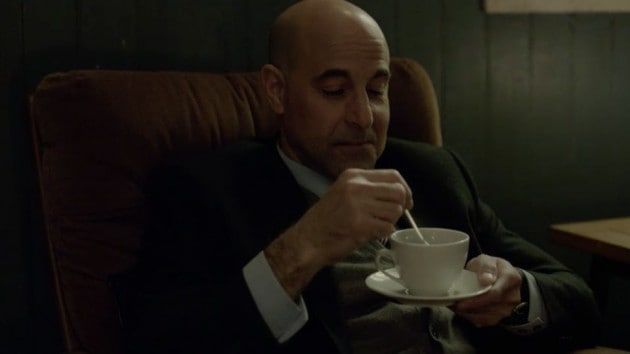 Where last week’s episode of Fortitude presented the audience with a town’s lurid secrets, this week’s episode features DCI Morton neatly dropping in and pulling on a number of these threads, watching the fabric spool away from its carefully-constructed state, and into something much less symbiotic, and much more chaotic. As he sits in the hotel, stirring up his coffee as he’s doing to the town, “Episode 4” slowly begins to build momentum again, an episode long on shadows and casting sideways glances at characters and what they think they know about each other.

Morton’s presence in most of the scenes in “Episode 4” give them a certain sense of direction that last week’s infidelity-soaked episode had no ambitions towards. There are other stories being told in “Episode 4” – mostly of the boat-riding duo of Frank and Dan, whose copacetic work relationship is falling apart around their shared connection to Elena, a trend that continues across many characters in the isolated, snow-laden town. What becomes clear is that trust in Fortitude is more a matter of silence rather than honesty; when everything is frozen under the surface, stuck in the limbo between rumor and fact, it’s easy to maintain the status quo and keep moving forward.

That status quo is quickly splintering, however, something “Episode 4” states in much more interesting, dramatic fashion than the previous episode. The continuing decline of Dan’s mental state is fascinating to watch, a sheriff whose underhanded dealings with the town are coming back to bite him, as if karmic justice has finally reached the shores of Fortitude, in order to exact a long-waited revenge. Every moment of infidelity is met with horrible realizations; Frank that he left his kid alone, Natalie that sleeping with the mayor’s wife could be a terrible idea, and of course Dan, who let Henry murder a man and get away with it, more or less.

Now, none of these things really help point the audience in the direction of a suspect; what this hour does (again, much better than the previous episode, which was squarely concerned with who was sleeping in who’s bed) is establish that everyone in Fortitude is a threat to be taken seriously (except maybe Jules; could anyone see Jules actually hurting somebody?), since everyone’s relationship with the truth is tenuous, at best.

It makes Morton the Truth Beacon such an entertaining component of the hour, giving it some much-needed personality outside the strange, not-so-Russian guy creeping around stealing evidence, or Charlie’s boring wife, whose presence is really just an excuse to let Hildur dig a hole deeper for herself, with her fake apology to Trish, feigning regret and remorse for the death of a man about to kill her economic vision for Fortitude (seriously; it’s the best scene of the episode not featuring Morton, and by a long shot)… a death, of course, which brings the ‘inevitable consequence’ to town; the whole conceit of Fortitude is that nobody can die on the island, so all their emotional baggage and secrets get taken with them to the homeland to die (as they’re trying to do with Henry). It’s when one dies on the island (above ground, of course) that everything begins to leak out, that the shoddy constructions of mistruths and social perceptions fall away to reveal something much, much darker.

This theme ultimately marries itself to the cinematography of Fortitude, and it’s what makes it such a visually engaging snow. The constant juxtaposition of white landscapes and shadow-y interiors make for a succinct visual metaphor; the truth of the town lies in the dark. On the surface, Fortitude appears as plain and bland as a pile of untouched snowflakes; but look within the shadows of its people, the reflections of our actions and self that cannot lie, and underneath it all lies the monster (figuratively, at least to this point) in ourselves waiting to be discovered, the mammoth we try to ignore, but all too often find ourselves embracing in our selfish attempts to find happiness (we’re looking at you, Frank and Elena). As Dan shows us throughout the hour, all it takes is a little push and a light shone at the right angle to set someone off in this town; a world of shadows and lies that speak to the nature of angry, lost souls wasting away in the purgatory of Fortitude’s massive glacier.