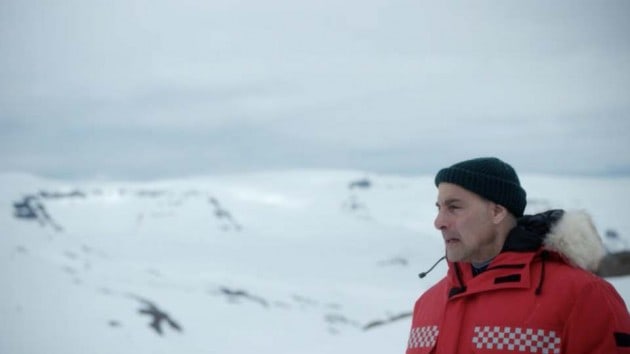 Fortitude is going into lock down, and Fortitude is kicking into high gear – even though by the sheer speed and tone of the episode, you wouldn’t be able to tell. As devastating as it is measured, and as poignant as it is quiet in many moments, “Episode 10” is an hour that builds on the increasingly haunted atmosphere of recent weeks, and presents us with a town teetering on the edge of – well, on the edge of a cursed mammoth graveyard, which both explains (and stupefies) us as to what is happening underneath the surface of this forsaken land.

A lot of “Episode 10” is spent with characters looking back at foregone conclusions, and fighting hard to change the inevitable: the only person who really accepts who he is and what he’s done in this episode is Henry, who comes clean about fathering Dan and subsequently abandoning his family, leaving them to live with an abusive husband as he frolicked around Europe, presumably taking pictures and drinking heavily. His regrets have always weighed heavy on him, but betraying his own son (who has no idea who his father is) is the ultimate betrayal – and one Henry tries to make up for the only way he knows how, sealing his fate by gravely injuring DCI Morton, killing himself, and telling his son the truth about what happened. In his own twisted way, he’s trying to rid Fortitude of the evil plaguing it by killing himself – little does he know that he’s leaving the town unprotected, thanks to Frank’s everlasting temper.

Henry as the centerpiece of the episode makes for a harrowing ride, Michael Gambon’s expressive face capturing the dead soul of Henry as he shoots Morton and blames him for trying to mess up his suicide. And it gets even more wrenching as Morton goes into shock, trying to bargain with his own body that he can survive the wound, even as he thrashes weakly around in all the blood that’s pouring out of his midsection. A single bullet has turned Morton into the lost, babbling soul that Henry’s been all season, a beautiful, horrifying juxtaposition – and ultimately, blending – of roles, as the man attempting to uncover information, is most likely killed a dead man who spent the end of his life trying to hide the truth.

That dark irony is really the saving grace of an episode that is mostly setting up for the finale: Elena and the closed door with zombie Ronnie, Markus’s revenge, and whatever happened to Liam and Shirley apparently happening to Jason (and by proxy, maybe Liam again, who is sitting in an airport full of people). Like the blood seeping out of Morton’s stomach, we can see the inevitable end game of the quarantine initiated by the mayor: the proverbial feces are about to hit the fan, and the darkest parts of all these characters are going to come to light, be it earthly, or other-worldly.

“Episode 10” relies heavily on this creeping feeling, lingering on shots of characters and accentuating silent scenes with long looks at characters at internal crossroads, be it Elena reaching her breaking point, Dan facing a moral quandry, or Markus burying his dear wife out to sea (how they’ve made him a somewhat sympathetic character still amazes me – but how can you not feel bad for him, all things considered?). Every character in this episode has to make a choice about who they are – and for many, that choice stands to lead them down a dark, dark path, Dan being the lone exception in this scenario. Though with all the looming images of the great white, pure predator looming in the background, there’s still plenty of time for the one man in Fortitude breaking good to get eaten by a bear – or ripped apart with a fork; either one is fair game in this desolate town of four police and a couple hundred armed citizens.