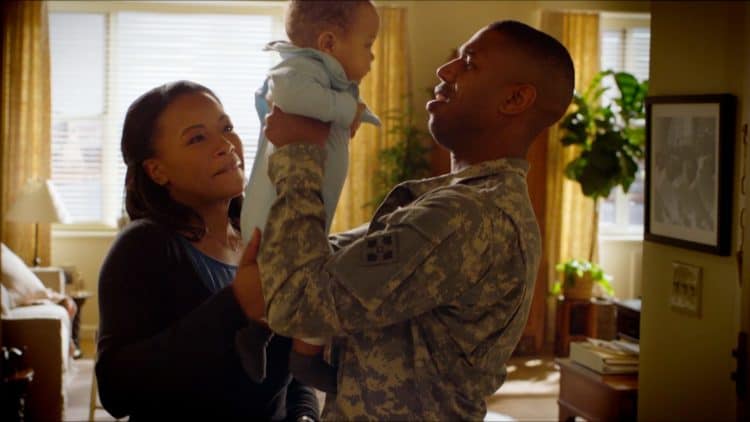 Denzel Washington returns behind the director’s chair in A Journal For Jordan, which stars Michael B. Jordan as First Sergeant Charles Monroe King, a soldier deployed to Iraq who begins to keep a journal of love and advice for his infant son. The feature has a mix of veterans and newcomers with an impressive filmography. This article will list the five excellent movies involving the cast of A Journal For Jordan, whether they’ll background nobodies to the leading man (or woman). Each film must have over ten reviews and animated features are exempt from the list. Let’s get started with our first feature.

In this timely and thought-provoking thriller, Monsters and Men is told from three different perspectives in regard to a tragic incident revolving around a police officer shooting a black teen in a Brooklyn, N.Y., neighborhood. Layered with a top-notch cast including John David Washington, Anthony Ramos Jr., and Kelvin Harrison Jr., Monsters and Men doesn’t exploit its subject matter for entertainment as it tackles the sensitive issue in a clever and mature manner.  Thankfully, everyone’s side of the story is given attention and care and Monsters and Men wisely doesn’t choose one side to promote an unfair narrative.

This excellent character-driven piece that announces the arrival of Ryan Coogler focuses on 22-year-old Oscar Grant, a loving father who was tragically gunned down by police on New Year’s Eve. The feature flashbacks to the last day of Oscar’s life, where we understand the young black man and his struggles while trying to navigate life in San Francisco. Like Monsters and Men, Fruitvale Station wisely doesn’t choose one side to promote an unfair narrative. However, the key thing is how strong Grant is showcased before tragedy strikes. Michael B. Jordan is perfect as the young black man trying to do good despite the issues that he’s dealing with. We’re able to understand Grant’s vulnerability and insecurities thanks to Jordan’s tremendous performance. Of course, Melonie Diaz gives a strong and understated performance as Grant’s girlfriend and the final image following Grant’s shooting was a powerful and tragic moment that’s elevated by her skills as an actor. Coogler treats Grant with respect, while still showcasing that he’s a normal human being that makes mistakes.

This Marvel feature rocked the world of cinema during its release sees T’Challa return home to the African nation of Wakanda to take his rightful place as king. T’Challa’s will is tested when a powerful enemy suddenly reemerges, and his conflicts put the fate of Wakanda and the entire world at risk. There’s a reason that Black Panther was a cultural phenomenon during its time in theaters as it’s a superhero film that transcends the genre in unexpectedly ways. Chadwick Boseman is simply perfect as T’Cahalla/Black Panther as the actor oozes with charisma and an onscreen performance that’s unmatched by many talents in Hollywood. The origin story doesn’t exactly differ much from other Marvel films, but the Ryan Coogler vehicle does a strong job at crafting compelling characters around a solid story.

This spinoff of the popular Rocky franchise centers on Michael B. Jordan’s Adonis Johnson, who’s following in his father’s footsteps by becoming a boxer and gets Rocky Balboa to aid him in training. A surprisingly intimate story that takes the Rocky franchise in a fresh and interesting direction. Of course, it’s great to see Stallone back in his Rocky role; however, his turn as the aged fighter showcases the strong acting ability of the veteran. Jordan is great as the title character, and Coogler does an excellent job of layering Johnson that sees him as more than just a prominent figure. Adonis is a flawed individual who’s dealing with the struggles that has held him back as not only a fighter, but a man, and the film seamlessly weaves through the action and drama with ease.

In this sexy and captivating drama, Constance Wu headlines this feature as Destiny, who’s life changes when she becomes friends with Ramona, the club’s top money earner. Eventually, Ramona and Destiny form a daring scheme that sees the girls gain huge profits from their wealthy Wall Street clientele who frequently visit their club. Hustlers is a bold film that smartly tackles important themes that isn’t displayed too much in mainstream media. Despite the core characters being the villains for their schemes, Lorene Scafaria carefully balances the story that helps audiences relate to their characters, while never painting their actions as justifiable. Jennifer Lopez steals the show thanks to her confident and layered role as Ramona. Lopez manages to be sexy, loving, caring, manipulative, and cunning without any of her emotions coming off as fake. The rest of the cast is great as well and the provocative drama breathes air into a world that’s rarely explored.