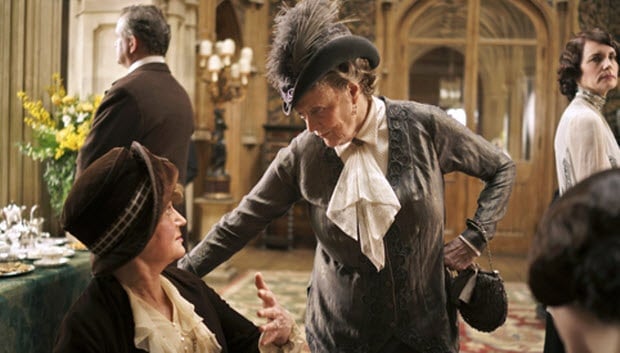 Holy Giamatti, we’re at the end of Downton Abbey’s fourth season.  I feel a bit like Bill Hader’s SNL character Stefan when thinking about last night’s episode: this episode had EVERYTHING … Paul Giamatti, Shirley McClaine, Prince of Wales, royal scandals, Mr. Bates as a forgerer and Isis the dog.  We open at Downton 8 months since the last episode, enough time for Edith to come back home from her sojourn in Geneva where she had a baby and picked up French.  Edith is still (understandably) upset and can’t will herself into the spirit of the coming out ball.  She misses her daughter who has been given to a family in Switzerland so she just can’t find it in herself to do the jitterbug, thank you very much.  And in the saddest insult to injury in all of television, Mary proclaims that she won’t even share a bed with Edith while they host visitors at Downton.

Downstairs, Mrs. Hughes and Daisy have an opportunity to travel to London to receive Downton’s American guests, Cora’s mother and brother played by Paul Giamatti and Shirley MacLaine.  Daisy isn’t thrilled about the idea of travelling to London because “what difference does it make if you peel potatoes in London or peel them in Yorkshire?”  Daisy will obviously never steal Rose’s title of Captain Fun.  In London, Daisy meets Mr. Levison’s valet who is impressed by her culinary skills and charmed by her indifference.  Daisy displays the epitome of Mary Crawley femininity – refusing to take compliments and acting as if having a discussion with a man is an imposition.

The American visitors make quite a commotion for the Grantham family.  Martha Levinson arrives without a ladies maid because apparently she’s bullied her into quitting.  Harold seems less than enthused about the trip and refuses to discuss the Tea Pot Dome Scandal that brought London to America.  Although Harold plays the fish out of water American, he has a Mr. Darcy like charm.  He meets the honorable Madeleine Allsop who is thrusted onto him by her father who is title rich and cash poor.  She has no personality but he’s taken by her anyways.  Am I the only one who thinks that Harold and Mary would make an attractive couple because they’re both bold and unconcerned with popularity?  Plus Mary has a habit of marrying her cousin.

Rose spends her time preparing for her coming out to society by checking out the Embassy Club, where she’s introduced to the Prince of Wales.  The Prince of Wales knows her father, Shrimpie and stayed with him in India.  Who would have thought that a man named Shrimpie would be the key to getting into the good graces of the Royal Family? Rose is obviously enthralled with the Embassy Club, which she returns to shortly thereafter.  Mr. Sampson overhears her conversation with her friend and asks if he can join them.  Rose says yes because the fun train has room for everyone she perceives to be rich.  At the Club, she leaves Sampson alone at the table with all of the ladies’ hand bags. At first I thought Sampson would merely steal some shillings but he grabs a indecent letter from Freda’s bag.  You see she’s THAT Freda, the royal mistress that scandalized England before the Camilla Parker Bowles days.  I was hoping we’d get some insights into the content of the letters, although I’m sure nothing can top Prince Charles famous tampon line to Camilla.  Freda discovers the letter is missing and asks Rose if she took it for fun.  Rose wasn’t clever enough to think to do that and remembers that Sampson is probably shady and asks Robert to intervene.  Robert is outraged that the information may be leaked to the press “all the public wants is a happy marriage at the palace, is it too much to ask?” Oh Robert, be happy that you won’t be alive to see Prince Charles and Diana get a divorce.

Meanwhile, Mary continues to be chased by Blake who takes her to a summer exhibition.  She bumps into Tony Gillingham who has been romantically stalking her this whole time.  These two like it AND want to put a ring on it but Mary’s going to keep stringing them along.

And in romances that no one cares about, Tom runs into Miss Bunting while he’s in town and offers to treat her to dinner at the Grantham pub.  After dinner she insists on getting a look at Downton after hours.  Tom takes her back and is caught by Mr. Barrow who lurks in the shadows like the Phantom of the Opera.  I’m not sure why he presses on Baxter for information when he’s perfectly capable of getting gossip on his own.  His one true character flaw is in thinking that anyone else would be as good at information gathering as he is.  Barrow later informs Robert of what he saw, because he can’t stand to see Tom living the Grantham life when he should be a chauffeur.  I guess that means Barrow hasn’t seen Tom on one of his many Driving Miss Daisy trips with Isobel.

Downstairs, Anna and Mr. Bates are briefly in trouble when Mrs. Hughes offers to donate his coat to poor Russians.  She finds a train ticket that Bates kept confirming that he was in London when Mr. Green died.  Being the leader that she is, Mrs. Hughes passes the information off to Mary to make her deal with it.  Mary is momentarily conflicted about keeping Bates’ secret that is until he offers to help forge documents for her family to protect the Prince of Wales.  In the wayward morality of Downton, murder is forgiven as long as you pitch in to save face for the crown.

And oh, what a crown!  The Granthams are paraded to Buckingham Palace for Rose’s presentation.  Rose has Cora present her because having Violet present her would ruin her Captain of Fun flow.  This gives us an opportunity to see all of the Granthams in their finest, even Robert puts on a nice red uniform and the women have gorgeous feathers in their hair.  This is really what we’re all watching Downton for.  The plot is nice, you know blah blah blah someone died, someone had a baby, oh look Tom has a new girlfriend but really if we’re being honest with ourselves we can admit we just want to see a royal ball.

The Prince of Wales, off the hook for his scandalous letters due to help from the Grantham’s, arrives at the ball.  Now Rose will truly be the talk of all high society, which I’m sure she will take with grace and modesty.   Tony Gillingham monopolizes Mary’s time at the ball and asks for a status update in the drawing room.  Tony has clearly never watched The Bachelor or else he would know that persistently checking in on where you stand with a lady is not becoming.  Mary gives him a vague answer about how she can’t see herself with Blake because they’re from different worlds and Tom admits that Mr. Blake is filthy rich.  Bye bye Gillingham, I believe you have sealed your fate.

Meanwhile, Carson conducts the string quartet on the dance floor because he’s a true Renaissance man.  On the dance floor Harold and Madeleine flirt and he asks her to write him letters.  Even though the courtship is dull, hopefully this means we’ll get Giamatti back for next season.  Tom runs into Edith at the ball and tells her that they need to fight the Granthams together.  Edith, who has completely lost her mind with grief takes that as a cue to get her child back.  She makes a deal with Drewe the next day to keep her daughter and during their entire conversation I remembered the ominous warning by Violet about the sword of Damocles.

And finally the episode closes with the Downton staff enjoying a day at the beach.  Molesley looks perfectly content playing soccer on the sand and he gets a sincere and heartfelt compliment from Baxter “your strength has made me strong.”  Mr. Levionson’s valet confesses his intentions to Daisy, who turns down his romantic gesture.  And further down the beach Mrs. Hughes convinces Carson to step his toe into the water and hold her hand, which she manages to turn into a racy statement in Carson’s eyes.  And there we have it folks, the upstairs and downstairs at relative peace at the end of this season and we’ll have too many months to wonder what next season will have in store.

– And lest you think that Robert was excited to be reunited with Tom, he was just eager to see Isis.

– If only Edith would turn to Isobel for comfort instead of everyone else.

– I really hope Queen Elizabeth II watches this show, if only to see how Prince Arthur is portrayed.

– And the saddest line of this episode goes to Daisy who proclaims “I’m never excited.”

– Best insult goes to Lady Grantham (as always) for telling Isobel “can’t you even offer help without sounding like a trumpeter on the peak of the moral high ground?”

– The key to making Carson uncomfortable is to discuss your romantic intent.

– New euphemism for Nazis: a gang of toughs.

– Rose is totally going to end up as the next mistress of the Prince of Wales, am I right?