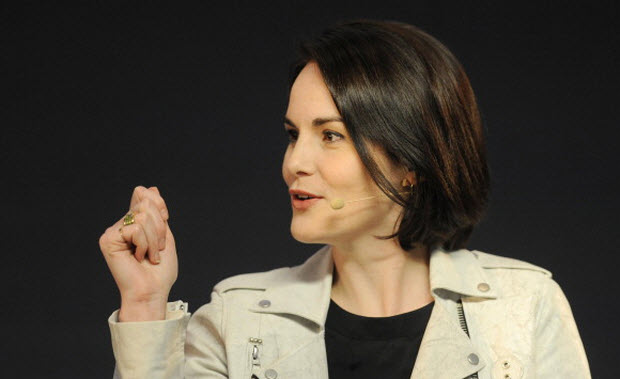 Let me start off by saying that this episode was erratic.  Downton Abbey‘s primary reason for existing is nostalgia.  For those of us watching in the United States, we’re so far removed from our British aristocratic ancestors that we can only dream of a life lived over the pond.  And in our quest to blame everything on modern society, it’s nice to sit and visit with the Crawley family and their beautiful home and clothes and admire how regale and simple everything used to be.  We don’t want to learn anything particularly significant; we just want mild drama and a chance to stare at pretty things.  Downton Abbey is the pinterest of PBS.  And as such, walking the Crawley family through a warp speed “modernization” rings false.

On tonight’s episode we’re meant to believe that the Crawley family, holed up in their mansion far away from any real cultural influence, is pretty much okay with a surprise African American jazz band leader (Jack Ross) in their home.  And furthermore, that Lady Grantham, a woman who proclaimed to not understand what a weekend was, seemed to embrace the idea wholeheartedly.   No.  Just no.  The Crawleys aren’t what you would call “forward thinkers” and Julian Fellowes four seasons have proven that.  Not a mere episode ago, Robert was chasing Mary back to her room after Matthew died because asking a woman to do any activity while she was grieving was considered overtasking a delicate flower.  These are people for whom clinging desperately to the past is seen as a birthright.   And so I submit that the writers have completely ignored the Crawleys we’ve come to know and inserted a version of them that is far more palatable to a modern audience.  It’s happy fun time, embrace the future Crawley’s!  Coming up next: Sybbie gets an iPhone!

But I digress.  The Crawley’s seem to be able to skate by without attaching themselves to any world view of their era that would be embarrassing to the audience now.  Up to and including the relationship that they have with their staff.  For instance, Robert again asks Mr. Bates how things are going in the ol’ marriage department in what seems to be a gesture of friendship on his part.  I don’t buy it.  That these two stubborn, stiff British men would ever want to discuss marital woes together seems insane.  These are the people that we watch and admire for how much they sip down their feelings and let them bubble out over too many cocktails at the grand dining room.  These are not people who break the ice and address issues that to them would be a signal of failing as a man.  I imagine the real Mr. Bates and Robert would say something to the tune of “how’s the wife” then reply “she’s fine” and that’s where it would end for the rest of time.  And while I’m on the subject, let’s talk about Cora going out of her way to ensure Mr. and Mrs. Bates have a lovely time at a restaurant that we’re quite sure neither of them would realistically ever get a table at.  I mean, I live in Los Angeles and getting a reservation at French Laundry was pretty much an act of God and this is 2014.  The last time I checked these two were servants whose wages would not allow them to afford such a dinner and the rigid British class system would prevent them access to such a place.  But nevertheless, here comes Cora Crawley, sheparding in a new era of acceptance into the upper class.  You go girl.

The only glimmer of hope I saw in this episode was when Mary, the ice queen, reembraced her natural state and gave her new house guest Blake a dressing down when he arrived.  Blake has a government job and apparently hates British high society.  Mary, sensing that an attractive man disagrees with her, goes for blood.  Is there anyone amongst us who doesn’t think that Mary will fall madly in love with this man?  Mary, just once, I’d like you to recognize that when you hate someone, you really love them.  Except for Edith, for whom you loathe.

-Tom threatens to move to the United States again and Isobel tries to talk him out of it and … oh wait a minute, no one cares.

-For the record, that is absolutely not what I thought a paper knife would look like.

-The Crawleys will forever remain uptight about one item — refusing to call Molesley by his first name.

-Lady Grantham’s best quip of the week: (Isobel)”How you hate to be wrong.” (Lady Grantham)”I wouldn’t know, I’m not familiar with the feeling.”

-Mr. Bates continues to kill it at the creepiest one liners: “Every time I remember what you’ve been through, I want to murder.”

-Saddest thing Mary has ever said: “I’m not unhappy, I’m just not quite ready to be happy yet.”

-Edith is pregnant, bringing the Downton baby count to a happy 3 and a round 4 if you include Robert.

-Bye bye Alfred, you were the tallest man we knew at Downton.