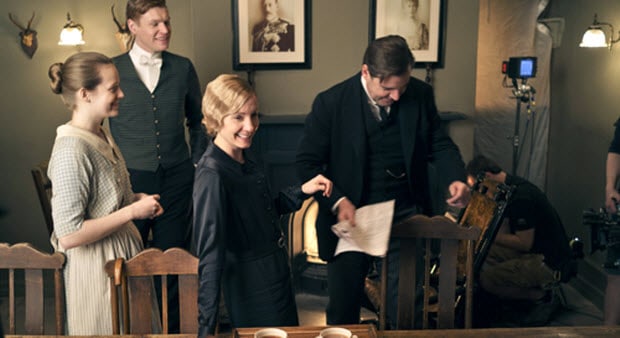 This episode opens with a telegram arriving at Downton.  Did anyone else wonder if it was going to read that Mr. Gregson was dead?  (And was anyone else HOPING it would say he was dead?).  But no, we get the news from Mr. Bates who tells Mrs. Hughes the telegram means “his lordship is going to America” and Mrs. Hughes looks thoroughly horrified.  Come on Hughes, we’re not the savages that you suspect we are! Stuffy ol’ Robert is off to America to help Cora’s brother with “the senate.”  Not that I don’t appreciate the Crawley’s but Americans tend to not want British royalty interfering with American politics since well, the whole King George debacle. And furthermore, even Robert knows that being a distant relative of an Earl doesn’t mean that much “I know plenty of relatives of English Earls who belong in jail.” TouchÃ©!

Poor Robert can’t go anywhere until the issue of his valet is solved.  Bates doesn’t want to go to America and leave his precious Anna behind.  And Robert doesn’t want to go anywhere without Bates because he doesn’t know how to put on his own cuff links.  Mary learns about Anna’s trauma through Mrs. Hughes and convinces her father to take Thomas as his valet instead.  Robert can’t fathom why Thomas would want to go but Mary has an idea “why wouldn’t he want to go?  All of those handsome stewards strutting down the boat deck.”  How right you are Mary, how right you are.  Thomas looks pretty pleased with himself that he’s off to America, showing that there is no justice on this show when Thomas is the one who gets an adventure.  You know who deserves an adventure?  Poor Mr. Molesley.  You know the guy who has valet experience with the former Matthew Crawley.  Wouldn’t we all feel a bit better with Molesley accompanying Robert than with Thomas breaching our shores and inflicting his own curious blend of narcissism and scheming on our soils?

Before Robert leaves he tells Rose “I leave you in charge of fun” in effect giving Rose permission to behave like a harlot.  Has Rose ever needed encouragement to have fun in her life?  I can think of plenty of other Crawley’s that need a swift kick of fun in the pants (Edith being the primary candidate).  Lady Grantham arrives at Downton to send Robert off to the United States, although they keep calling it America.  Perhaps Robert is really off to Buenos Aires on an expedition to lose the family fortune.  In which case, adios!  Lady Grantham appears to be agitated and a bit sick.  Violet offers to help her but Lady Grantham waves her away.  Violet, left without a human being to fix, invites Tom to a political speech.  Tom chauffeurs Violet back home, proving that his primary skills is driving.

Elsewhere Edith is brooding at home, she’s just learned that Gregson did check into his hotel in Munich but went out and never came back.  She tells Cora who can’t quite understand what a man like Gregson is doing in Germany.  Edith quickly changes the subject and asks if she can go to London to get her hair done.  Rose, who has been hiding underneath the floorboards this whole time listening in, jumps out and asks if she can join.  She’s the captain of fun, she insists, and Edith has been a sad sack who needs a bit of cheering up.

Alfred gives news to the staff that he’s returning to Downton en route to visit his sick father.  Mrs. Hughes and Mrs. Patmore are incredulous that he’ll come back and upset the tenuous relationship between Ivy and Daisy.  Mrs. Hughes decides it’s best to tell Alfred that the staff has the flu so he should stay at a pub rather than come back to Downton.  Mr. Carson, upon learning of this deceiptful plan declares to Mrs. Hughes “you’re quite a plotter when you want to be, aren’t you?”  But unfortunately the plot doesn’t prevent Alfred from stopping by at Downton before he’s on his way back to fancy French chef class at the Ritz.  This kicks the hornets’ nest between Ivy and Daisy who are destined to hate each other until the pool of available bachelors at Downton increases.  I hope this all ends in Alfred realizing that he’s in love with Daisy because I can’t watch this girl’s heart break anymore.  If she was into older men I might say she’d be suitable for Mr. Molesley, who also seems to get the short end of the stick in life.

Back at the Lady Grantham ranch, she’s diagnosed with bronchitis and requires ’round the clock care.  Violet steps in to fulfill her savior complex.  Lady Grantham thrashes about and looks sickly but we know she won’t die.  She cannot die.  Mary’s suitors can come and go but the audience cannot suffer the loss of Maggie Smith.  Our fragile American hearts will break in two.  Even in her sick bed, Lady Grantham manages to launch the perfect insult at Violet “I want another nurse, I insist.  This one talks too much.  She’s like a drunken vicar.”  Once Lady Grantham has recovered she’s also forced to endure endless rounds of Gin with Violet, who feels she has now earned her friendship.  Well played Violet, guiling people into liking you.  Doctor Clarkson tells Lady Grantham that she’ll be rewarded in heaven for putting up with Violet Crawley to which she replies “the sooner the better.”

And in the romance department, Rose meets up with her jazz singer beau Jack behind Rosamund’s back.  Literally no one was surprised when she later didn’t make it back in time for dinner.  Meanwhile, Edith confesses to Rosamund that she’s with child and has decided to terminate the pregnancy.  She doesn’t want to be a societal outcast.  Rosamund, defying all expectations, decides to keep Edith’s secret and accompanies her to the doctor’s office.   Edith decides she wants to keep her baby and runs out of the doctor’s office.  And that’s good because Rosamund hadn’t quite figured out what to tell Edith’s parents if she died on the operating table.

Mary and Mr. Blake have a lovely time rescuing her pigs before dinner.  They both let down their guard enough to literally sling mud at each other after weeks of doing so metaphorically.  Was anyone else cringing that Mary was ruining her dress during this fiasco?  Her willingness to get dirty gives Mr. Blake half a chance to see that Mary isn’t all that bad despite her aloof exterior.  And Mary wins over his heart when she takes him back to Downton and makes him scrambled eggs.  And just when the oven of love between Blake and Mary heats up, Tony Gillingham arrives.  What are the odds that we’ll get to see a good ol’ fashion mud pit fight for Mary’s affection between Gillignham and Blake?  A girl can dream.

And since this is Downton, we have to leave on a sour note.  Gillignham’s arrival means our resident creeper, Mr. Green is back to terrorize Anna.  At the servant’s dinner the conversation turns to the night of Nellie Melba’s performance and Green gives enough details to alert Mr. Bates to who he really is.  And with that, the seed of murder is born.  Up next: CSI Downton.

-Robert is visiting America in the roaring 20s and so if he can stop being a wet blanket for a few days he just might enjoy some jazz and liquor.

-I’ve never once called our country America, it will forever remain the United States to me.

-Who is the horrible human being who recommended the worst pig man of all time to the Crawleys?

-Has Cora’s face exhibited any expression besides “pleasantly amused by life?”

-How many days off do the staff get?  By the looks of it they get about half a day off once every 3 years.

-Tom meets a girl at the political speech, or rather; he meets the only girl at the speech.

-How in the world did Lady Mary learn to make scrambled eggs?  I can’t imagine she was fussing about in the kitchen at any point in her life.

-Isn’t it nice to see Mr. Molesley back at the house?  Am I the only one who cares about this man?