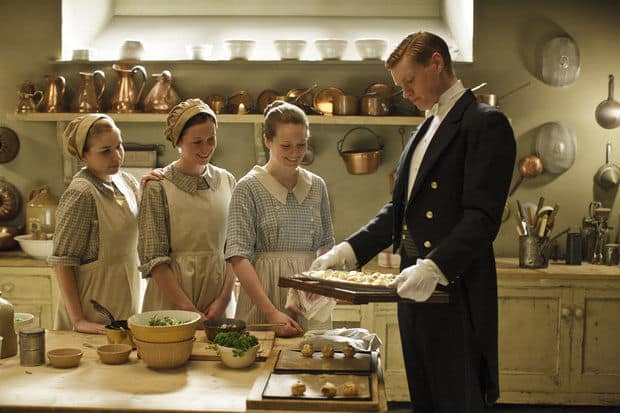 Downton Abbey is always trying to teach us an important lesson: that we’re never quite through the tragedy and grief of life and we certainly can’t avoid it.  In this season’s episode 4, we open with a reminder of the horrible thing that happened to Anna in the kitchen when the Australian singer was in town.  Mr. Bates still can’t quite figure out why Anna isn’t talking to him and has moved out of their cottage.  Bates laments to Mrs. Hughes “my life is perfect and then in the space of one day, it is nothing” inadvertently summing up the revolving plot lines of the entire show.

In this episode we’re introduced to the new lady’s maid, Baxter, who we know from the previous episode is a recommendation from Thomas.  Thomas, our resident shady character can literally be up to no good when it comes to recommending new employees.  Baxter appears to be pretty mild mannered, skillful and polite which is damning evidence of a nefarious plot at Downton. She thanks Thomas for the job and he explains that she can repay him through ingratiating herself with the staff and telling him the secrets “from upstairs.”  Thomas has made note that things are changing at Downton and he wants to stay abreast.  I assume he’s talking about Tom and Mary’s increasing influence over the business of Downton and not Cora’s newfound interest in modern appliances.  Although if there is a poison that benefits from refrigeration that’s certainly something that Thomas should know about.

But back to the upstairs, Mary gives us her famous icily reserved reaction when reading about Lord Gillingham’s engagement to Mabel Fox.  Last episode she told us she was going to regret not getting engaged to him so I’m sure we’ll all eager to see this whole thing play out.  Edith makes the unfortunate error of letting her presence known by asking Mary about it which gives Mary the perfect opportunity to insult her “not for the first time, you’ve got the wrong end of the stick.”  BURN.  Mary will never ever let up on Edith, even though she’s her only sister still alive.

Meanwhile, Edith is all nerves when we learn that she hasn’t heard from her beau Gregson who is off to Germany to get a divorce.  She takes a trip up to London to “check in on Gregson’s office” alarming literally no one.  I may have turned into a suspicious Lady Grantham but come on people. What sort of “business” would she have at his office?  Isn’t anyone going to check in on Edith and make sure that her rendezvous up to London doesn’t lead to a horrible mistake?  If Thomas had overheard this tidbit of information he would have pieced it all together.  Focus Crawleys, focus.

Robert spends the episode involving himself in what I can only imagine is another financial disaster by lending Tim Drewe some money to keep his family’s farm.  Mary learns of her father’s “generosity” when patrolling the farm grounds with Tom and she decides it’s a sign of her father’s moral character.  And thus we learn another universal truth about Dowton Abbey:  Mary’s blind spot is her father.  Even though he tried to take away her rights to Downton while she was grieving for Matthew, Mary still just can’t seem to let it sink in that her father is a horrible fool.  Here’s hoping that when she inevitably ends up with Lord Gilligham, he’ll help her see the failings of her patriarch.

And in subplots that nobody cares about Lady Crawley decides to take in another wounded bird and force Lady Grantham to hire him.  As a childless widow, Lady Crawley is best when she’s practicing the art of meddling with the lower class.  And Lady Grantham is also at her best when she’s insulting Lady Crawley’s perpetual motion machine of charity “I wonder if your halo doesn’t grow heavy. It must be like wearing a tiara ‘round the clock.”  And of course immediately after Lady Grantham hires Pegg as a trainee gardener, her precious paper knife goes missing.  She simply cannot do without it because it came from the King of Sweden.  And in terms of arguments that I’d want to get into with fictional characters, I just wouldn’t question the value of a paper knife to Lady Grantham.  It just isn’t wise.

But back to the highs and lows of the staff downstairs.  Bates tricks Mrs. Hughes into revealing what Anna has been so upset about.  Anna and Bates have a nice moment where they talk about how much they’re telling each other the truth now and Bates waits about 30 seconds before telling Mrs. Hughes he’s going to continue to lie to Anna to spare her the stress of knowing he’s going to kill someone.  Team Bates, you never learn.

Daisy decides to help Albert learn how to cook for his upcoming cooking test at the Ritz, doing a good enough job for him to nail the “savory” dish at dinner at Downton.  He then goes to London for the Ritz test where he fails to answer an uncomplicated question about vichyssoise.  (Am I the only one who shouted the answer to the television before the other character on Downton figured it out?)  In the end he doesn’t get the opportunity which provides for a great scene in which Mosley is humiliated, which is something he’s become quite good at this year.

-What do you suppose Edith and Albert talked about on their drive up to London?

-In case you weren’t clear on it, Rose REALLY likes parties and she’s more than willing to help you plan them.

-I haven’t heard anyone on Downton say “under butler” in a long time and I’m starting to miss it.

-Cora must be learning the art of a witty comeback from Lady Grantham because she tells Mrs. Patmore “Is there any aspect of the present day you can accept without resistance?”

-The creepiest line of the episode goes to Mr. Bates when talking about Anna’s tragedy “I have never loved you more nor been prouder of you than in this moment.”  Ew.

-Sybbie is an adorable baby who can be counted on to hide all of the animals underneath the shelter before a hurricane.

-Anyone else detect a simmering attraction between Mary and Tom?  I know she’d never go for a former chauffeur but one can dream.

– Also, in case you missed it, Lady Grantham really does not support having a poet in the family.