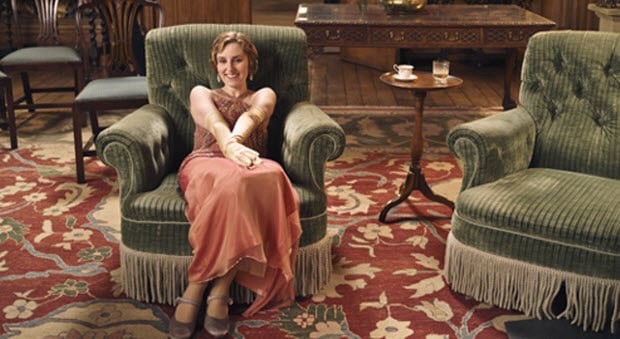 Hello Downton Abbey fans, we’ve arrived at the penultimate episode of this season.  And my, how the Crawley’s have changed.  This season opened with a drab, somber Mary hiding from her life and grieving over the loss of Matthew.  In contrast, this episode opens with Mary taking charge of the pig issue at Downton.  Mary visits the gentleman at Yew Tree, Thomas Drew to see if he can take on the additional responsibility of supervising the pigs.  At first, Mary believes this may be an imposition but Mr. Drew replies “work’s like old age m’lady, the worst thing in the world except for the alternative.” Quick, someone get Rose, Captain of Fun, so that she can cheer up Mr. Drew.

Back at the Abbey, Cora is fretting over organizing the bazaar, an event that eventually appears to be a mixture of a street fair and a carnival.  Apparently half the town hates each other and Robert is the only one who can smooth it over.  Robert is overseas in the United States, diplomatically handling the Tea Pot Dome Scandal while suffering the indignity of not being able to drink in public due to Prohibition.  Oh Robert, how our entire continent has disappointed you.

Downstairs, Molesley begins to strike up a friendship with Baxter who is momentarily away from the evil eyes of Thomas.  Molesley, being Molesley tells her that “life kicks the stuffing out of you” to which she reminds him that he has a lucky life.  Molesley takes the compliment and appears to have a little spring in his step as the reality unfolds in front of him that he may actually be flirting.  And given that all of the downstairs relationships are doomed to failure, it’s nice to focus on one that might actually have a chance.

And in the failed relationship department, Ivy gets a letter from Alfred in which he describes his intention to marry her.  And also, his father died.  Ivy tells Mrs. Pattmore that she won’t accept the proposal because she doesn’t want to miss out on life’s opportunities.  Mrs. Pattmore, whose dreary outlook could rival Mr. Drew’s, tells her “you’re a very optimistic generation, I’ll say that.”  Daisy eventually teases out that Alfred is coming back and plans to propose to Ivy.  Daisy initially tries to hide from Alfred by visiting Mr. Mason, who thankfully packs all of his picnic baskets with cider beer.  Mr. Mason convinces Daisy to take the high road and she gives Alfred a touching goodbye.  And in case your heart strings hadn’t been yanked properly, Mrs. Pattmore witnesses the whole affair and tells Daisy that she’s proud of her.  Cue the author of this post shedding a tiny tear.

Elsewhere, the family gathers for dinner giving Isobel an opportunity to meddle in Tom’s life and suggest that he run for a local council seat.  And while she has him buttered up, Isobel asks Tom to drive her to Thirsk.   In Thirsk, Tom spies Rose with Jack Ross at a restaurant.  He witnesses a more than friendly cheek brushing from Rose and rushes back to Downton.  And in case we thought that Tom was a true socialist, believing in the right for all people to marry whom they choose, he tells Mary what happened.  Mary confronts Rose to confirm the story when Rose drops the bomb that she is in love and engaged to Jack.  Mary then embarks on a trip to London to confront Jack at the jazz club.  Jack announces that he doesn’t intend to marry Rose because it would ruin her life.  Mary agrees that this decision is for the best and notes that if they lived in a better world, she would support the match.

Rosamund arrives at Downton under the auspices of checking in on Lady Grantham.  At the family meal she announces that she’s interested in improving her French and she’d like to take a sabbatical to Switzerland to practice her language skills.  And one more thing, she needs to bring Edith.  Lady Grantham correctly sniffs out that something is amiss because “Rosamund has no interest in French.  If she wishes to be understood by a foreigner, she shouts.”  Lady Grantham convinces Edith that having the baby in Switzerland is the best path because if she kept the baby at Downton, it would be the “permanent sword of Damocles.”  In case there was any doubt, Lady Grantham is up on her Greek mythology.

And in The Bachelorette: Downton, Mary receives visits from Gillingham and Blake declaring their offer of marriage.  Mary, hogging literally all of the eligible bachelors in the UK, expresses that she’s still not ready to take on a new husband.  This seems to only embolden both men to continue their fight for Mary’s affection.  Meanwhile, I imagine Miss Lane Fox is picking up a copy of “He’s just not that into you.”  And in breaking news at the bazaar, it’s Mr. Bates Deja vu all over again.  Gillingham informs Mary that his valet Mr. Green died in an accident in Piccadilly.  Green was pushed into the open road and suffered at the fate of an oncoming train.  None of the witnesses could pin point the assailant, which seems preposterous.  Mary tells Anna, who is now not so comfortable with Bates’ vague answers about what he was doing in York.  Perhaps Anna initially thought he was visiting the streets in York that inspired “The Shambles” in the Harry Potter series but now she’s not so sure.  Oh, the things one misses while one is murdering.

The episode closes with Robert returning to Downton.  He has a loving reunion with Cora and then takes a seat with the family.  And just to get back into my good graces, Robert  announces “down with prohibition” as he sips on a glass of champagne.

-I really love the word penultimate.

-I don’t know what kind of trickery was involved but it was nice to see Molesley beat Jimmy at the carnival game.

-In the drawing room, Edith tells Lady Grantham “don’t bully me!” which is an equal part heroic and stupid.

-As Mrs. Pattmore points out, Alfred puts together one heck of a letter.

-I wouldn’t refuse of coffee from Molesley either.

-Going to France to study French is so middle class.

-Tom continues to flirt with Sarah Bunting, who insults him for carrying chairs.

-The most depressing Lady Grantham line of all time: “All life is a series of porblems which we must try and solve.  First one, then the next and the next.  Until at least we die.”

-With one episode left to go, who are we rooting for Mary to end up with at the Christmas special?