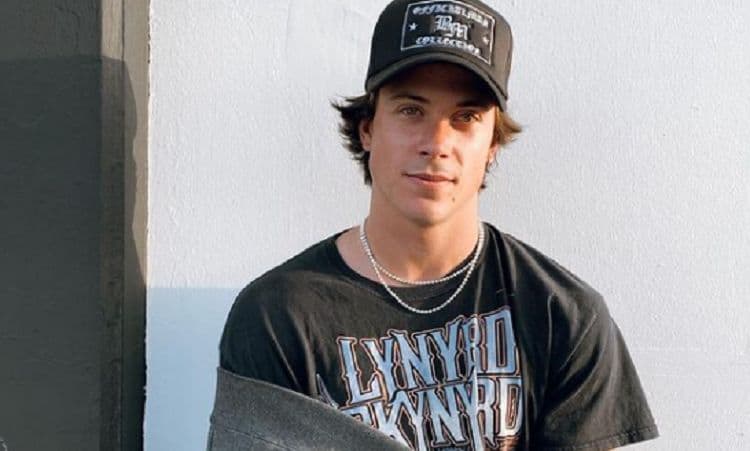 When you date someone who is in the public eye, it’s only a matter of time before your relationship makes its way to the spotlight. That’s what Brighton Reinhardt has been dealing with ever since he and former Bachelor contestant Cassie Randolph decided they wanted to go public about their relationship. The couple has been getting lots of positive responses about their situation, and they seem to be very happy together.  Although most people now know Brighton for being Cassie Randolph’s boyfriend, the truth is that there is much more to him than his relationship status. The two even shared a kiss in the music video for Brighton’s new song, “Dreaming“. Continue reading for 10 things you didn’t about Brighton Reinhardt.

Brighton was born and raised in Southern California, but there doesn’t seem to be any information out there on his upbringing or his family. From what we can tell, he still lives in the area. Since this is the perfect place to be for someone in the entertainment industry, it seems unlikely that he will ever relocate.

Brighton’s handsome face is probably the first thing that people notice about him, and his good looks have opened the door for lots of opportunities over the years. Bright is currently signed to the world-famous Wilhelmina modeling agency. He has gotten to work with some big brands such as Hollister.

3. He Hasn’t Been Linked To Any Other Well-Known Women

We’ve all heard the saying “it’s a small world”, but the truth is that the entertainment industry is even smaller. As a result, it’s very common to see people in the business dating in the same circles. However, as far as we can tell, Cassie is the first well-known person who Brighton has dated.

4. He Started Making Music As A Teenager

Brighton has loved music for as long as he can remember, and he was pretty young when he started his own musical journey. During an interview with Male Model Scene, Brighton said, “I was about 13 or 14 years old when I got Logic for Christmas and I think that is when I decided I wanted to be a musician.”

5. He Was Born With A Rare Health Condition

Brighton was born with a condition called Congenital Pseudo Arthrosis which has resulted in him having to undergo more than a dozen surgeries. According to the Paley Institute, “Congenital pseudarthrosis of the tibia (CPT) refers to nonunion of a tibial fracture that develops spontaneously or after a minor trauma. A pseudarthrosis is defined as a “false joint” and is a break in the bone that fails to heal on its own.”

6. He Loves Hanging Out By The Water

Brighton is truly a California boy through and through. When he isn’t busy with work, you can usually find him spending time at the beach and relaxing in the sun. Thanks to his work as a model and a musician, Brighton has also gotten the opportunity to visit beautiful beaches in other places.

Inspiration is one of the most important parts of the creative process, and Brighton cites John Mayer as one of his biggest musical inspirations. In fact, John Mayer’s Continuum was the first album Brighton ever bought. Bright also credits Ed Shereen with being another one of his inspirations.

Having an online presence is an important part of making it as an entertainer these days, and Brighton has worked very hard to establish himself on the internet. Part of that includes setting up a YouTube channel. At the moment, the only upload on the channel is the music video for “Dreaming”. It’s unclear if Brighton will only use the channel for his music videos or if he plans to post other kinds of content.

9. He Used To Work In Marketing

Music and modeling are his main focus now, but it looks like there was a time when Brighton had to work a “regular” job. According to his LinkedIn profile, Brighton worked as the marketing and brand director for a company named Hardt Fit. In 2020, he was also the general manager for a company called Nuzuna Fitness.

Writing songs and performing are what most people know Brighton for. However, making beats is also part of his creative process. Typically, he will make a beat and then start working on the lyrics for a song. He also plays the guitar and the piano. The fact that he is so well-rounded is a good sign for the longevity of his career.