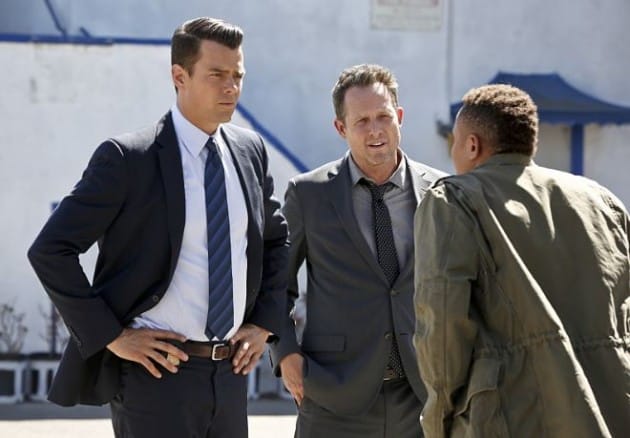 Wow. Battle Creek has been good all season. It’s been the stereotypical new series. It has a lot of potential, slowly finds its sea legs, and then becomes a moderately entertaining Sunday at 10pm show. We’ve seen that before. What came this week, however, was almost mind blowing in the way that everything came together. Out of nowhere, Battle Creek clicked. It went from finally figuring out that its cast was funny but its cases needed to stay serious, and suddenly morphed into something so gut-wrenchingly real that I couldn’t take my eyes off of it. Wow, what a difference a couple of weeks makes, eh?

This week on Battle Creek: Commander Guziewicz’s adopted son Danny (Rotimi, Power) asks for Milt’s help in re-opening his biological parents’ murder case. Councilman Pritchett (Michael O’Neill, Rectify), a former cop, makes life difficult for Russ as he assists Milt with the case. Font and Jacocks investigate Holly’s new boyfriend, only to find out Holly is the one with the decorated past.

Honestly, I’m awestruck. I knew that the cast and creative team behind Battle Creek had all the potential in the world. As I’ve said in my previous reviews, the show has had some serious potential. The characters are fantastic and funny, and the situations (for the most part) aren’t so ridiculous as to take away from the seriousness of crime in an underfunded city. But you know how when you’re watching a show and then, all of a sudden, it clicks? That’s what happened this week. I’m not sure if it was just the hiatus and my subconscious missing the show, or what, but what I do know is that this was the best episode Battle Creek has done. Period.

As great as Russ and Milt’s relationship has always been, this episode was a real game changer. Milt put faith in someone that Russ cares deeply about (Danny), and, together, they brought the real killer to justice. In turn, this episode brought some strong revelations about why Milt chose Russ to work with in the first place: he’s a good cop. A great one, actually. Josh Duhamel has been fantastic on the show’s brief run to date (that bit when they’re riding in Russ’ car and he tries to lean the seat back? Brilliant), but it was Dean Winters who did most of the heavy lifting in this episode. Milt’s character drove the plot forward, but so many real moments came from the two of them together, working on the case. I cannot get enough of their relationship.

Janet McTeer deserves a commendation for her nuanced performance as Cdr. Guziewicz. There is some serious emotional depth to a woman that would adopt a child like Danny. As more was revealed about her character later in the episode (her abusive parents and her alcoholism, to name a few), the more you could feel Danny’s walls breaking down and letting her in. Everything both characters had been through was so heartbreaking, and yet, the hope of reconciliation was stronger than all of the negative.

I think each performer in this show gives such a wonderful, nuanced performance. Every actor does little things that show up in later episodes. On occasion, there are character traits revealed that just feel right. In this week’s episode, when Font and Jacocks were investigating Holly and finally get to the bottom of her juvy record? I died laughing. Aubrey Dollar has given such a fascinating portrayal of Holly, with the nuances being so minuscule that you didn’t know you believed her violent side until it came out. But when it did? It made perfect sense. It makes so much sense now why she and Russ should be a couple. He’s a hot head, and she’s violent/crazy. But I LOVE it. Probably not enough Kal Penn and Liza Lapira in this episode but…I can’t have it all.

Ultimately, I’m floored by the strides made by Battle Creek to achieve this week’s episode. I knew it was a good show and it had potential, but a show living up to that potential is such a satisfying feeling. Hopefully, eight episodes in isn’t too late for the series, because they just hooked me for the long haul.

What did you guys think? Did you enjoy this episode like I did? Let us know what you think!