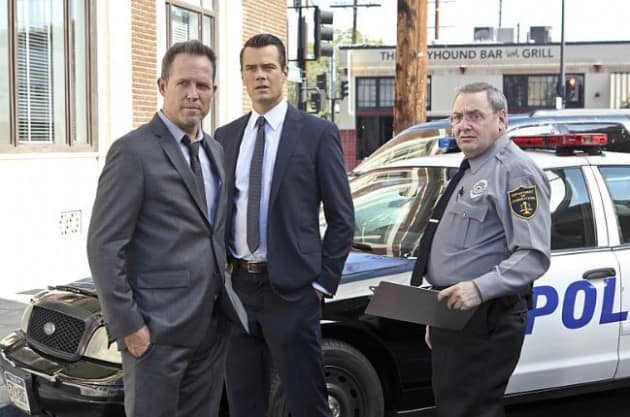 Battle Creek  has shown a lot of promise in its first handful of episodes. There have been ups and downs, but ultimately, it’s a show that is slowly finding its sea legs and identity. This week’s episode started out slowly, but quickly morphed into an episode with quirk and heart, two things that Battle Creek does well.

This week on Battle Creek: Holly is tested in her role as media liaison when an obnoxious reporter comes knocking. Meanwhile, Milt and Russ find a body in a lake, and the only person they can turn to for help is Russ’ mother, a con woman named Constance (Candice Bergen from Boston Legal).

As I mentioned previously, this installment of Battle Creek was a little sluggish at first. I was intrigued by Russ’ mother’s criminal past, but as a whole, the story remained uninteresting….at first. Then, with Milt’s assistance, they began to delve into the extremely complicated relationship between Russ and his mother. The more they delved, the more I ate it up. I was thrilled with the depth that it brought to Russ’ character, and both Dean Winters and Candice Bergen did some fantastic acting in this episode. Just wonderful. I was moved. To have to watch your mother take a lie detector test in which she lies about loving you? Wow. Powerful stuff.

Dean Winters (and Josh Duhamel, for that matter) do not get enough credit for their work on this show. Regardless of the material they’ve been given (which has been hit or miss thus far), Winters and Duhamel are always atop their game in these episodes. This episode of Battle Creek was a particular showcase for Winters, but both have been showcased brilliantly in the six episodes prior. Agnew and Chamberlain are a pair of compelling detectives with a lot of great story left to tell.

One of my biggest beefs with the show in its brief run so far has been the under-use of the supporting cast. I didn’t even see Funkhouser or Jacocks in this episode. When Kal Penn and the gang are pushed to the background, it severely limits the potential (especially comedic potential) of the show. That being said, one of Battle Creek‘s best supporting cast stories yet has come from this episode. I’m talking of course about Aubrey Dollar’s Holly, and her round with the obnoxious reporter. Holly is one of my favorite supporting characters, and it was so wonderful to watch her go to such lengths to protect Russ. And to find out that she had been conned by Constance, just as a “good enough for my son” test? Brilliant. If Aubrey Dollar has this much story every week, I’m not going to be able to complain.

All in all, I have to say that I was impressed with this week’s episode of Battle Creek. I wasn’t sold at first, but as the story has carried on, I have become more and more convinced that this show has what it takes to be great. Is it quite there yet? No. But I’m certain that it will get there. It has all the tools (acting talent, comedic chops, story potential), and I am sure that it knows how to use them now. Will they utilize everything they’ve got and score a renewal? Here’s hoping!

What did you guys think of this episode? Let us know in the comments!