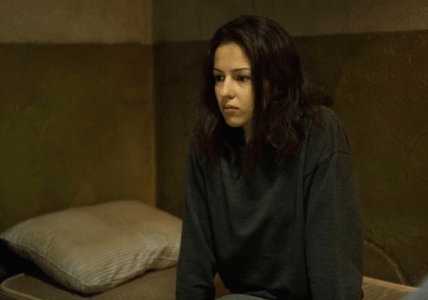 It takes too long to kill someone in television, and The Americans is no exception. It takes too long to gather their things, and put them in bags. It’s always more formal, and stiff, and quiet. It’s obvious, in retrospect, when the decision to kill has been made. But you never see it coming. It is always a surprise.

From the moment Nina was sent to prison, she was going to die. Everyone knew it. Oleg knew it. Stan knew it. Nina knew it. She couldn’t be the person that she needed to be to escape. She helped them suss out a traitor, but she threw away that freedom on purpose. Nina is not that kind of person, even when she tries her hardest, and on March 18th, 1983, she was shot in the head for the crime of not being cruel enough.

She dreams of her and Anton escaping; she dreams of them being let go to go back to America. It’s full of light and smiling scientists. It’s full of soldiers who smile with joy as she cries tears of the same kind. It’s so bright, and clear, and saccharine; it’s sugar glass, and all it took was a gentle laugh outside of her cell door to break the dream.

Then, they just shoot her. Just like that. One shot, blood on the tile floor, fingers brushing away hair to press on her neck; no pulse. Her body lifted onto canvas cloth, carried away. They do paper work next to the pool of blood, continue talking as though nothing has happened.

Who is Stan Beeman, really?

He’s no longer a sympathetic character; this season has wiped out all possible routes to actually good guy-ness. His continued encroachment on Henry and the Jennings’ home and the desperate search of Martha’s apartment have drug him across a line that he cannot cross.

You see, Stan isn’t actually capable of being a father or an FBI agent. He thinks he’s fathering Henry, for lack of a better phrase, but all he is doing is being the cool uncle who has no responsibilities. Stan can be fun and engaging and without consequence for Henry because he has no duty to him as a parent. He can cast a wide net as an FBI agent with impunity because he sold out his country and it landed him a big fish. Stan has done the wrong things and ended up in the right spot for two seasons now, and he’s come to believe that he’s actually as good as he appears to be.

More sugar glass. A single tap and it all comes down. One internal review of the FBI records (a conversation with that digital archivist, for example) brings Stan to his knees; one mention of Henry to Phillip from Stan and Stan finds that he’s entered a world whose air he is unqualified to breathe. Whatever person Stan was before he embedded with the white supremacist terrorists has long been bred out of him. He cares about and goes the extra mile for one thing, and one thing only: himself. It’ll destroy him. He’ll come to a moment when he needs friends and family and information, and he’ll break under the pressure.

Elizabeth and Phillip are rapidly coming upon the decision they were always going to have to make, and they’re going to have nowhere to run. They’re going to have to decide what is more important, their family or the Centre, and either decision leads to the Cold War getting very, very hot. If Elizabeth and Phillip are exposed, that gives the US more than enough justification to start a real war; if they switch sides, and give up the information to the US themselves, same thing. They can run, but they’d have to run from everyone, and with Henry and Paige, it’s unfeasible. They all know this decision is coming. It’ll take the smallest push; the smallest footstep; the lightest touch to send everything into a spiral.

Elizabeth changing her mind on killing Pastor Tim and Alice means that she’s chosen her family’s happiness, at least for now. She’s always been the one who truly believed in the cause, but even she has begun to waver. All of the violence and death are destroying her, and she doesn’t want Paige to end up the same way. She’s going to have to make this decision for herself, and soon.

Every character on this show is standing on sugar glass, mistaking it for solid ground. They can see the end just below their feet; the burning fires that will consume and destroy them all, waiting patiently. But it’s not a matter of Elizabeth and Phillip stepping carelessly, or of Paige breaking under the pressure, or of Martha slipping up to Stan and the FBI. That sugar glass is going to evaporate underneath their feet, no matter what they do. Gabriel described their choice to let Pastor Tim and Alice live as “living in a burning house”, and that’s exactly right; they think they can erect this clear divider, and have everything they ever wanted. But it will break.

Glanders cancels Epcot, Stan is a weird person, and Martha grimaces and drinks in tonight’s episode of The Americans.