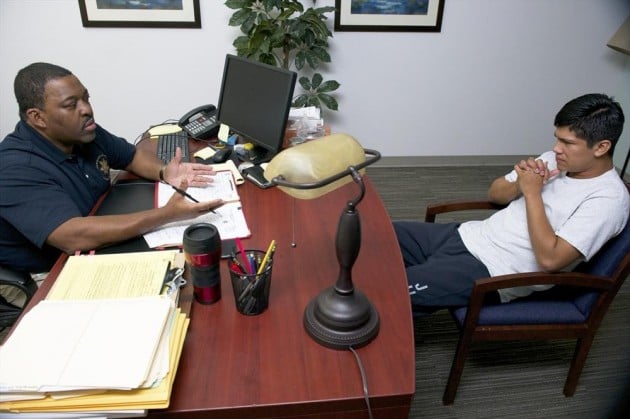 There’s a slight shift in tone from American Crime‘s pilot to “Episode Two” that resonates deeply to the show’s core: it’s a much quieter episode of television. There are dramatic rises, of course, and the score still occasionally reaches to establish emotion, but “Episode Two” doubles down on the slightly distorted presentation of the pilot, pushing conversations farther into the background as John Ridley’s camera hangs on the faces of its diverse cast of characters. This tiny visual change may not seem like much – but those bits of interspersed silence and over-lapped audio give room for subtle emotional depth, which pays off in spades across a fine hour.

Like the first hour, “Episode Two” is heavily focused on the mental process of dealing with painful, traumatic events, with many characters lamenting the empty spaces in their lives, both temporary (for Aubrey) and permanent (for the Skokie and Carlin families). Though pain is an emotion we share with many people – and often heal with – it’s a very deep, personal emotion, and one each character in American Crime is struggling to deal with. “Episode Two” pushes these familial buttons hard, with Aubrey calling someone who cares about her (a father?) for money, the Gutierrez family, and the many conversations between the parental units of the families at the heart of this tragedy. And through that pain, American Crime‘s reflections on the state of our society and legal system begin to come to light (like Hector, who is threatened to be shipped off to Mexico on a warrant despite his cooperation, or Tony, who gets an eerily similar coercion from his PIO to speak about the “circumstances” surrounding his arrest).

In the first episode, these themes were often introduced in heavy-handed ways: the approach in “Episode Two” feels a lot more even-keeled, slipping away from  the black-and-white (sometimes literal) approach in the pilot, for a much more measured, careful look at the racial divide in America, both as a whole and in its individual communities. The Gutierrez story remains the strongest of these stories, with Tony and Alonzo both having to come to terms with the anger inside themselves, anger that was fueled by Alonzo’s borderline-desperate attempts to assimilate his children, and led to Tony’s rebellion. Although these two are arguably the farthest from the show’s core murder, their story is the most engaging, a fascinating exploration of what can happen to someone who enters the legal system blindly with good intentions, and how quickly they can be chewed up in the political/legal systems designed to protect (some) of us.

Also, “Episode Two” backs away from some of its most problematic characters for a moment (Carter primary among them), which allows its racially-tinged moments to hit with much more subtlety. Even Barb’s sudden turn towards racism feel more natural in this episode, a by-product of a mother’s pain and her inability to process what she’s being told about her son, and turning to thin-headed Fox News arguments to delay dealing with her personal tragedy. There’s no validity to her argument about “why isn’t it a hate crime when it happens to us?” (at least in this circumstance, given what we’re learning about the happy marriage of her son and daughter-in-law), but American Crime doesn’t really try to paint this as sympathetic in any way. It’s an ugly moment to end the episode on, and the cut to black after her declaration to protect her son no matter what enhances the dark undertones of that statement without fanfare, the kind of quiet moral exploration I had hoped American Crime would present to the audience more in its first episode.

In every conceivable way, “Episode Two” is superior to its predecessor: even with characters like Aubrey, who wanders around in a haze, experiencing the predictable string of “addict losing her last tethers to survival” moments. But these moments aren’t packed with dialogue or over-stuffed with thinly-veiled attempts to “shock” us into thinking about issues in a certain light – instead, “Episode Two” focuses on the haunting moments of silence that come with deep realizations, the dissonance that comes from what we believe we know about ourselves, and how a single moment can blow that to pieces. How do we recover from that? Can we even recover from that? That question, tied directly to the socio-political observations of its central crime, are much more natural and symbiotic in “Episode Two” – again, it’s impressive what a few tweaks and quiet moments can do.