Home
Movies
Will Drax Still Die In Guardians of the Galaxy Vol. 3? 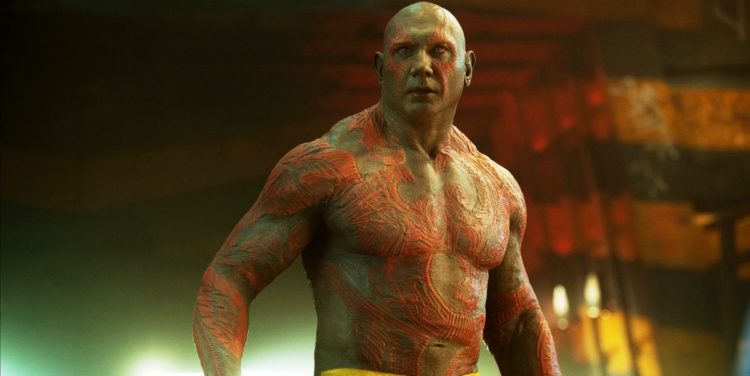 Would anyone else expect Drax the Destroyer to be one of the funniest characters in the Marvel Cinematic Universe? Before 2014, I would have told you to stop smoking whatever it is you’re on. But you know what? James Gunn and Dave Bautista made me a believer and after the first Guardians of the Galaxy, Drax only got funnier. As if his abrasive and dry delivery of his humor wasn’t exacerbated enough in the second Guardians of the Galaxy, the Russo Brothers only added more icing on the cake with Avengers: Infinity War. And holy smokes, was he not one of the funniest parts of the movie? Oh, I believe he was and I think Dave Bautista deserves all the credit he can get. Did you know he actually improvised the “Why is Gamora?” line? This is precisely why he needs to be in more movies. But we all need to ask ourselves one question that has been lingering in our heads for the last few years. I think you already know what it is and since James Gunn and the original crew is currently filming the third Guardians of the Galaxy, I think now’s the time to bring it up again. As of now, we know that this is the last time we will see the original Guardians team in the MCU. As sad as that is, we all knew it was inevitable. Just like the Avengers, the Guardians of the Galaxy is going to lose some of its original members and be replaced by new ones.

I think that’s exciting, as there are some very colorful characters who can make up the new and reformed Guardians of the Galaxy. The only thing that worries me is which of the original team will perish. Do you remember worrying about who will die before watching Infinity War and Endgame? I was one of those massive Iron Man fans who didn’t want Tony Stark to die. After watching Infinity War, I thought he dodged a bullet after nearly meeting his demise at the hands of Thanos. And going into Endgame, I just thought he would simply retire from being Iron Man and settle down with his family. Boy, was I wrong and to add more salt to the wound, I was honestly heartbroken. But hey, that’s why Endgame worked so well. It needed to kill off a big character like Tony Stark and even as the credits were rolling, the tears were dropping. I have a big feeling the same thing will happen by the end of the Guardians of the Galaxy Vol. 3. And who will be the Guardian to meet his or her end? The most popular choice is Dave Bautista’s Drax. Even before the firing of James Gunn, fans have been suspecting that Drax will be the one to die in the third movie. Heck, the speculation grew even stronger after James Gunn was fired.

As we all remember, Dave Bautista was not happy with Disney over that whole fiasco. He had every right to be, but out of all the cast members, he was the most vocal about his displeasure with their hasty decision. And boy, he did not hold back in his words. To say that he was upset about the firing of James Gunn is putting it lightly and to add more fuel to the fire, he heavily implied that his time working under the Disney banner would soon come to an end. Talk about how sad that is all you want, but we just have to appreciate the level of loyalty Dave Bautista has for James Gunn. It is precisely why Disney made amends with James Gunn and allowed him to give us one last Guardians movie. When a director has created that special kind of dynamic with his cast, it’s just impossible to do the third movie without him. So Disney rehired James Gunn, that means all is well between them and Dave Bautista, right? Okay, maybe not, as I doubt he has fully forgiven them for firing his friend. And let’s not forget that James Gunn has also made a comfy bed over at Warner Bros. and working with DC. If Dave Bautista were to give up the role of Drax, then he could easily go over to James Gunn and ask for a DC role. It might not be as simple as it sounds, but how cool would it be to see Dave Bautista as two comic characters? I think that will happen eventually, but we still need to see how he’ll end his run with Drax.

But what if Dave Bautista really is over the whole James Gunn incident? If you have Disney+, it might be because Dave Bautista is doing some of those advertising commercials for it. Yes, I’m talking about the ones where he plays an old man camping and fishing. But what does he do in his downtime? Watch Disney+. That’s a clear indication that maybe all the bad blood has boiled over. If it is, then maybe Dave Bautista isn’t done with Drax after Guardians 3. That sounds like a good theory, but where else would he pop up after that? Heck, maybe the other Guardians will move on and he’ll stay on to help the new team. That also sounds cool, but let’s be real, someone has to die for the team’s final hoorah. Does it have to be Drax? Maybe not, but his death would make fans break out the tissues. He’s been around for a long time, established himself as a great character, and has become a fan-favorite ever since. He’s a character we don’t want to lose but that’s exactly why killing him off would be a logical move. James Gunn surely wants to end this third Guardians movie on a high note and he’s always willing to cross boundaries. He has spoken before on how killing main characters in the MCU is a good thing, because we need to know our heroes are in real danger. If they were all like the heroes from the Fast and Furious franchise, then it would just be mindless action. That is until we hear Groot mutter something about family instead of his name. Drax does not have to be the one to die, but I think out of all the Guardians, he’s at the top of the list. Maybe none of them will die. That honestly seems unlikely, given how James Gunn isn’t afraid to kill off his characters. I still think Drax is most likely the one to meet his demise and if he does, fans will feel it. We’ll just miss his dry, unapologetic sarcasm and his uncanny ability to become invisible. What are your thoughts, Guardians fans?