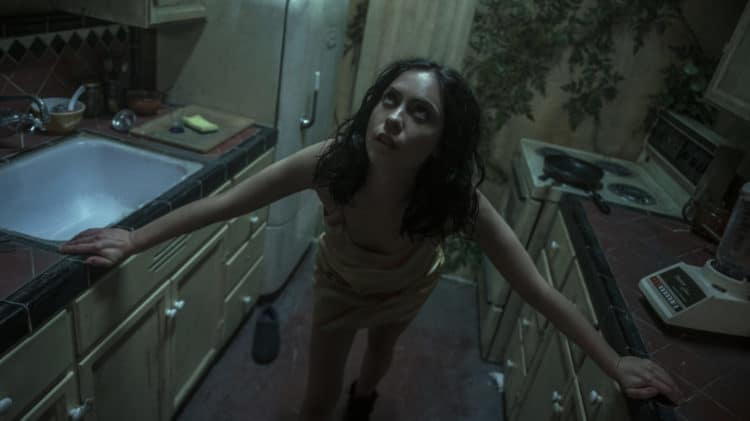 To start with, the 90s are becoming a favorite decade for a lot of filmmakers apparently since we keep getting taken back to that time period with so many different projects. It’s not exactly a bad thing, but heading back there enact a revenge story that deals with witchcraft, and the realization that there’s a price to pay for dealing with dark forces is one of the more uplifting parts of this trailer thus far. To be certain it does feel as though this movie will have some sense of balance given that it has the producer/director, whatever he is, trying to take advantage of the aspiring filmmaker who’s come to Hollywood to see her movie take off in a positive direction. He does something she can’t forgive, she wants revenge, and she goes to one of the absolute worst sources she can find to gain the results she wants. In other words, she wants to curse the producer and burn his life to the ground over this one act, which isn’t exactly overreacting since if a person has such an easy time trying to ruin someone it’s fair to say that they’ve done it before or are a complete sociopath.

The trouble with dark magic, especially in the movies, is that it tends to exact a pretty heavy price given that it operates under the rule that if you’re going to wish ill on an individual, then karmic justice of some kind is going to start building up, and the interest that comes due too soon doesn’t care about the reasons behind a person’s desire to harm another individual. It sounds a little corny and even a little cheesy, but the fact is that one way or another, wishing ill on another person does begin to tempt fate in a very dangerous way. In the movies, this means that playing with dark forces hardly ever turns out that great for the person being targeted or the person doing the targeting.

Such stories are still taken as great examples of such a premise though and it’s fair to say that the lead actress will be shown in a sympathetic light that gradually becomes far more antagonistic as she comes to realize that in order to defeat a monster one might actually have to become the monster, or at the very least, the villain. It’s a truly messed-up world in which one either becomes the victim or the villain depending on the choices they make, but it drives home the point that paying for the actions that you take is bound to happen since one can’t end a cycle by finding their own unique way to keep it going. Looking at this trailer it does feel as though the movie won’t be so antagonistic towards men in this light as a few of the other movies that have dealt with movies have been, meaning that the male characters won’t all be foolish, or evil, or perpetually stuck as the sympathetic individuals that have no hope of being anything other than the friend to the women in the movie. There do appear to be a couple of decent individuals in this project, which is kind of a switch.

The main character though is somewhat reminiscent of at least one of the women from The Craft, or could perhaps be said to be a blend of those women, since she starts out as hopeful and optimistic, at least in part, but becomes vengeful and spiteful rather quickly. Obviously, she has good reason but taking things to the level that she doe is a good indication that she had no idea what she’s doing or what she’ll have to pay in the end. Making a movie requires a great deal of sacrifice and hardship, and it would appear that in this movie the main character will be experiencing plenty of that. The look of the movie is pretty gritty and grimy, especially given that it would appear that things are being kept fairly dark for a reason, which is likely to set the tone of the movie, or something along those lines. Given the fact that the main actress is being beset by demonic-looking creatures, one can only imagine what’s going to be popping up in this movie and what might freak a person versus what will appear to be nothing too serious.

It does look enticing, and it’s a big hope that we’ll be a better explanation of the title at some point since it sounds interesting but also kind of different in a way that suggests that there’s a hidden meaning behind it. One could just look it up, but personally, I’d rather watch the movie and figure it out, since it’s a little more fun to guess at times. We don’t have long to wait for this one.