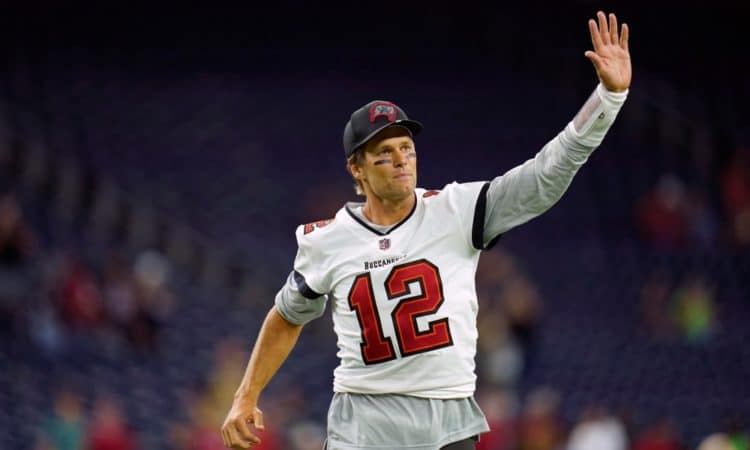 It’s hard to know whether or not this retirement attempt is going to stick with former Patriots and Buccaneers quarterback Tom Brady, but it would appear that he already has plans for his acting career in place, as he’ll be acting in and producing a movie titled 80 for Brady, which might be interesting enough to check out when the time comes. I’ll be one of the many to say that I don’t like Tom Brady, on the field, but anywhere else, meh. The guy has proven to be a great athlete and one of the best football players of all time, though labeling him the GOAT is tough since trying to compare the football players of today with those from back in the day isn’t as easy as it sounds. But when talking about his acting talent, Brady has already stepped in front of the camera and it would appear that he’s done just fine, which is something that diehard superfans would have already chimed in with since Brady fans have been proven to be insanely loyal. Who knows, it could happen that this turn in his career will be just as fruitful as his football career.

Wouldn’t that be a kick to see Tom Brady one day accept an Oscar? It’d vex a lot of people since the 7-time Superbowl champion would truly appear to be leading a blessed life at that point, but since such a thing hasn’t been seen yet, it’s fair to say that Brady might not be the one to make it happen. Or he might be, who knows? The point is that at the end of his career as a football player, as far as anyone knows, it would appear that he’s not quite ready to lay back and just rest for a while, as he’s going to be taking on yet another stressful career, depending on how deep he gets into it.

There are plenty of people that are bound to think that he won’t make it, that an athlete of Brady’s caliber won’t be satisfied, but that backward way of thinking is bound to die down if he does manage to do something great. Plenty of athletes and sports stars have gone on to have a career after they’ve retired from the career that’s kept them up for so long. Some manage to learn the ins and outs of acting and do quite well, while others don’t take to it quite as well and fade off as they try to do something else to keep their reputation up. One thing that Brady has going for him is that he’s already been on camera as an actor in the past, so it’s possible that after learning enough that he’ll get even better and start tearing up the silver screen. That feels like it might be a fantasy that some folks might want to buy into, but it’s possible. As of now though, Brady’s foray into acting is going to be watched by a lot of people with a great deal of interest since some will be watching to see if he can make it work in a big way, while some will no doubt be watching to see if he falls on his face.

That might sound like it’s less than welcoming but the truth is that there are plenty of people that are ready and willing to comment on what they think will be a worthy effort and what will be less than noteworthy. Brady was able to make miracles happen on the football field during the length of his career, and people applauded him for it even after he left the Patriots and made his way to the Buccaneers. But thinking that the same thing is going to happen now that he’s off the field and looking to get in front of the camera again in a different manner is going to be a test for a lot of people when it comes to accepting his new role as an actor. Some might not have any issues, while some might struggle with the concept for their own reasons. The overall point is that it’s happening, and while it’s not the first time that a pro sports athlete stepped into an acting role, it’s still something to take note of when it does happen.

There’s still that nagging doubt that Brady will stay retired since it would appear that retiring isn’t quite as easy these days as some might think it is. Tom Brady has had people cheering for him for well over a decade now, and it’s fair to think that he might come to miss those days and think about what it might take to get back on the field. Only time will tell, but a move into an acting career doesn’t feel like it’s going to be as easy as it might appear to some folks.