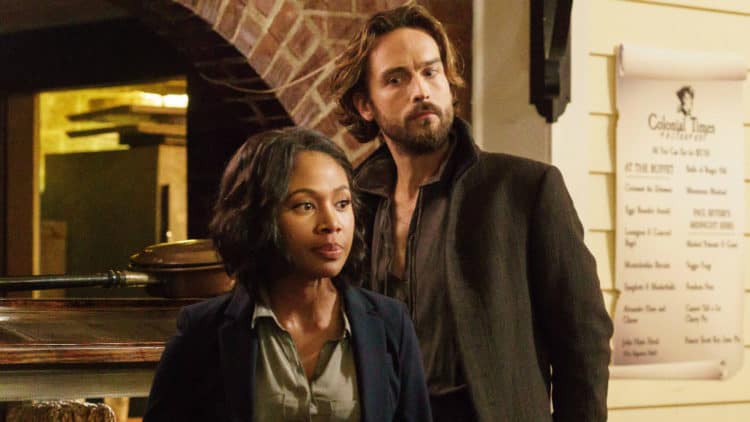 To the surprise of many, Sleepy Hollow was picked up by Fox in 2013 and officially premiered that same year in September. Based on the 1999 movie featuring Johnny Depp, it followed Ichabod Crane who was sent to Sleepy Hollow to investigate the decapitations of several people, who were rumored to be killed by The Headless Horseman. Before the show’s premiere, many were skeptical about the television series as the premise of the film seemed one-note and thin for a full television show. So when the series came out to positive reviews, it was a strong signal that the showrunner and writers truly understood how to adapt the premise to the small screen. Sleepy Hollow season one was a strong freshman season, while the focus wasn’t so much on the headless horseman, the writers wisely played with the mythology of the Sleepy Hollow world. Plus, the chemistry between Tom Mison and Nicole Beharie was incredible.

Then season two happened. The first episode of the second season got the show got off to an amazing start, but the quality noticeable dwindled due to some inconsistent writing. In response to falling ratings, Fox reportedly wanted the series to introduce a monster of the week aspect, which notably hindered the overall season two arc. Plus, the introduction of Ichabod’s wife, Katrina Cane, was a bit of a mess and the devil son storyline was hit-and-miss. Still, the chemistry of the leads carried the show forward and there’s no denying that there were fun moments along the way. Original showrunner Mark Goffman left the series and Clifton Campbell came on board for season three.

Unfortunately, this didn’t help with the quality of the show. For no apparent reason, Orlando Jones was booted from the series despite being one of the best parts of Sleepy Hollow since the beginning. The series introduced a couple of new characters; however, they all paled in comparison to the original cast members. The sloppy writing noticeably continued throughout season three, though the biggest insult took place in the season finale: Abbie Mills was killed off. Once the credits rolled, it wasn’t exactly clear that her character was dead; however, when audiences realized that one of the backbones of the series had been axed off the program, audiences were pissed.

It wasn’t just the insulting way that Nicole Beharie’s character was killed off. As I previously stated, her and Tom Mison were the backbone of Sleepy Hollow and there was no viable reason to murder off Beharie’s character. Since then, the true reasoning behind Beharie’s exit came out as the original cast member revealed in a Times interview that she had an auto-immune disease. It wasn’t just the chemistry of Beharie and Mison, it was the fact that these two were well-written characters. Ichabod’s fish-out-of-water, know-it-all character perfectly blended with Mills’ no-nonsense and badassery. The comedy between the two was perfectly balanced and the dramatic scenes added dimension to both Mills and Ichabod. In season three, Sleepy Hollow no longer felt fun. The series took a more series approach that resulted in bland writing and boring moments. Season three wasn’t all bad as there were fun moments throughout, but it was easily the worst season thus far.

Then, season four happened. A new cast (except Mison’s Ichabod and Lyndie Greenwood’s Jenny Mills) and a new location; however, the show just couldn’t recapture the magic that Beharie and Ichabod had. In comparison, the new characters were bland substitutes and the writing didn’t help gravitate audiences towards the new crew as Beharie’s exit remained a black cloud throughout the season. In truth, Sleepy Hollow never really found its footing as a series. The show was at its best when it had a season-long arc that allowed growth for the characters and introduced fun additions to the show. As much as I give credit to Beharie and Mison, the overall cast was top-notch. From John Cho’s Andy Brooks to Clancy Brown’s August Corbin, the cast of the first two seasons brought undeniable energy that elevated the show.

The series eventually lost its way and the continued changes effectively killed all the momentum. Whether it was the disappearance of the original characters, the shift in tones and sloppy writing, the quality of Sleepy Hollow slipped after each season and the series was a shell of its former self by season four. This show turned out to be such a disappointment because it started out so great. It should be commended that Sleepy Hollow was better than it had any right to be. It’s just a shame that it ended on a whimper.