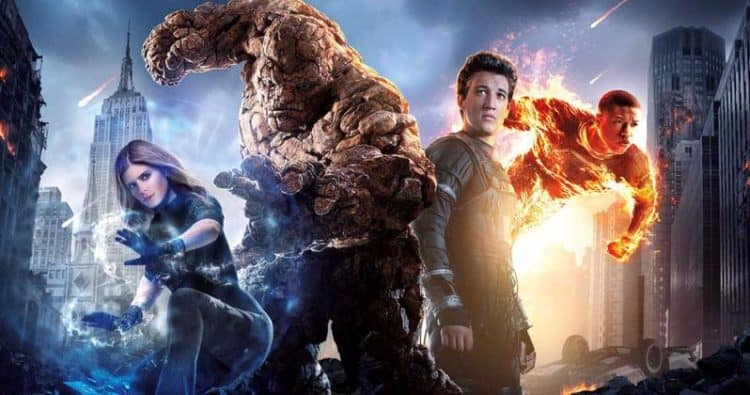 The unexpected success of the Fantastic Four led to the orthodox superheroes becoming some of the most notable properties on the planet. They were well-known before the Justice League and The Avengers arrived on the comic book scene, with many considering the Fantastic Four the first superhero family. There’s no doubt that the comic book heroes was a smashing success, which is why Constantin Film ended up buying the character rights in 1986. Following a low-budget Fantastic Four film in 1992, Constantin sub-licensed the rights over to 20th Century Fox, and a second Fantastic Four film came out in 2005, which starred Jessica Alba, pre-Captain America Chris Evans, Michael Chiklis, and Ioan Gruffudd as The Invisible Woman, The Human Torch, The Thing, and Mr. Fantastic. The first true live-adaptation on the first superhero family was met with dismal reviews; however, the film made over $300 million worldwide, thus making enough to greenlight a sequel. That sequel, Fantastic Four: Rise of The Silver Surfer, came out two years later and the reception was a bit better, though a 37% rotten tomatoes score still doesn’t classify the film in the good category. The sequel ended up making less than $300 million worldwide, and the superhero franchise was put on hold.

With the prominent rise of superhero films thanks to Christopher Nolan’s Batman Trilogy and the building of the Marvel Cinematic Universe, Fox decided to give the franchise another go, but with a darker tone resembling Nolan’s Batman films and a brand new cast. Starring Michael B. Jordan, Miles Teller, Kate Mara, and Jamie Bell as the new The Invisible Woman, The Human Torch, The Thing, and Mr. Fantastic. Despite a talented cast and director on board, the film was trashed by both critics and fans, and made less than $200 million worldwide. Since then, the property has reverted back over to Marvel Studios back in 2019. A new feature has already been announced, with Jon Watts set to direct the next Marvel film, though it’s a bit surprising that the property hasn’t tried the television route yet. With Disney plus excelling with Wandavision, Loki, and The Falcon and Winter Soldier, now’s a perfect time to experiment with the Fantastic Four down on the small screen as it gives the writers a better chance to tell a stronger and unique story.

One of the core issues with The Fantastic Four live-action films is that there was no sense that the directors truly understood the characters. Tim Story did a better job of transitioning the superhero family onscreen; however, the movie never took any risks that could truly showcase the dynamic of the Fantastic Four and their incredible abilities. The films were generic, “villain wants to destroy the world” type movies, and the bland and pedestrian story certainly didn’t do the 2005 adaption any favors. The 2015 reboot made the vital mistake of trying to mimic the world of Nolan’s Batman films. The reason Batman fits into the gritty and dark world that Nolan presented is that the superhero himself is a brooding and intense character. At its core, Batman is a hard-boiled detective. He doesn’t have any silly or orthodox superpowers and the storylines are mostly straightforward. Nolan wisely stayed away from the more colorful characters in the DC canon, with Joker, Two-Face, and Bane all fitting into the context of Nolan’s world like a glove. Putting the Fantastic Four into this type of world actually dampens their characters as their abilities are a bit too goofy for such a grim setting.

The television format allows the writers to take the time to write an engaging story and take some big risks that a feature film may not be able to do. Wandavision is one of the boldest television shows in the Disney property, thus it’s not impossible for the Marvel writers to be so daring with a Fantastic Four series. The most important thing is that a Fantastic Four show shouldn’t be afraid to get weird, but more importantly, have fun and tell compelling stories. The world of Fantastic Four is so rich with colorful characters and stories that it just needs the right set of writers to tell them properly. The Fantastic Four film is a damaged brand because of the horrendous editions that came before it. Disney is taking a huge risk by getting another franchise going because of the stink of the previous films. With a strong Fantastic Four series, this could’ve helped audiences get familiar with the property and build back the trust that Fox killed with fans because of their versions of Fantastic Four. Who knows, maybe Jon Watts will make an incredible film; He’s the director behind the great Spiderman: Homecoming and Far From Home films, so it’s not an impossible task.  The future of The Fantastic Four property is definitely an interesting one.