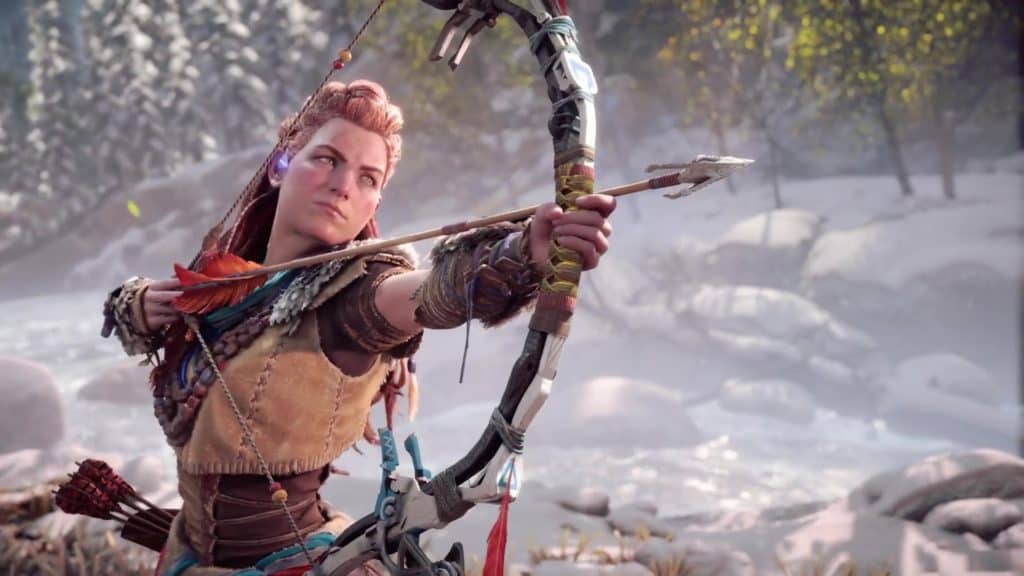 Just for those that don’t know what Horizon: Zero Dawn is all about yet, it’s an adventure game that features the main character, Aloy, in a post-apocalyptic setting that was brought about by a swarm of machines that still continue to survive and thrive in many different forms. Aloy starts out as a young outcast from the Nora tribe that is raised by Rost, another outcast from the same tribe. Human beings have formed into great tribes that are scattered across the landscape, and while Aloy’s story begins in what is considered to Montana, she makes a trek to the mountains far off from her home as well as to the deserts, battling mechanical monstrosities all the way as she grows stronger, more experienced, and more capable as a Nora Brave. The story culminates in Aloy’s confrontation with the sentient program known as HADES, which is one of the many programs that was created by the ancients, who were tricked and nearly wiped out by their own creation. The focus, a technological device that Aloy finds when she’s young at the beginning of the game, allows her to tap into the ancient network that the machines still use and determine the strengths, weaknesses, and capabilities of the creatures she goes up against, as well as access many areas throughout the game.

As a movie this already sounds like a great idea and using Rose Leslie, if she would agree to such a thing, would be perfect since her time as Ygritte in Game of Thrones is a good start to becoming a young Nora Brave that seeks to prove herself and become part of the tribe. The special effects needed for this movie would be impressive if they could be pulled off since many of the machines, which feed off of biomass attained from the world around them, are cast in the shape of animals that once inhabited the earth. The game only covers so much ground, but it’s a big hope that the sequel, Forbidden West, will end up being every bit as good as the first game.  Bringing this to the movie theater, or possibly to streaming as either a movie, a limited series, or a regular series, would be great since there’s a lot of world-building to be done with this story and it’s a big hope that whoever was given the project could manage to create something that would be nothing short of awe-inspiring.

The story of an exile that was shunned by an entire tribe for reasons that begin to become clearer as the game wears on would be kind of cool since Aloy is the type of character that doesn’t necessarily fit in at first with the rest of the Nora, though there isn’t a lot of reason given for this other than she’s different somehow. But as the game goes along she manages to earn the trust of the Nora tribe and of other tribes as well by taking on different tasks that she can accomplish in order to gain loot and become tougher and more confident in her abilities. It’s fair to say that the weaponry that’s used in the game might need to be given careful attention since during the gameplay a player can use the pause button and cycle through Aloy’s belongings to craft arrows and weapons, even when in battle.

Since this wouldn’t be too realistic it’s fair to say that it would need to be modified to show the character preparing herself as well as she could for a run into the wilderness for whatever task she was asked to complete. Still, this would be an impressive movie if whoever was given the opportunity was able to nail down every detail and find adequate spots to film in, since the landscape in the game is absolutely breathtaking. That might sound funny to say about a video game, but the artistry and the design that went into this game turned out so great that one can’t help but be impressed and hope that one of these days a movie or a TV show might materialize and be every bit as impressive. But with Rose Leslie as the main character it would just be a little more perfect since by placing other talented actors around her it might turn out just the way it needs to, and to be fair, Rory McCann, who played The Hound on GoT, would be a good pick for Rost.

It’s easy to think that this would be a botched project from the start since video games don’t always transition so easily, but the hope is that someone would find the need to do the absolute best they could to bring this to the fans. Horizon: Zero Dawn does have a fanbase, and it would be a great story if someone could develop it.