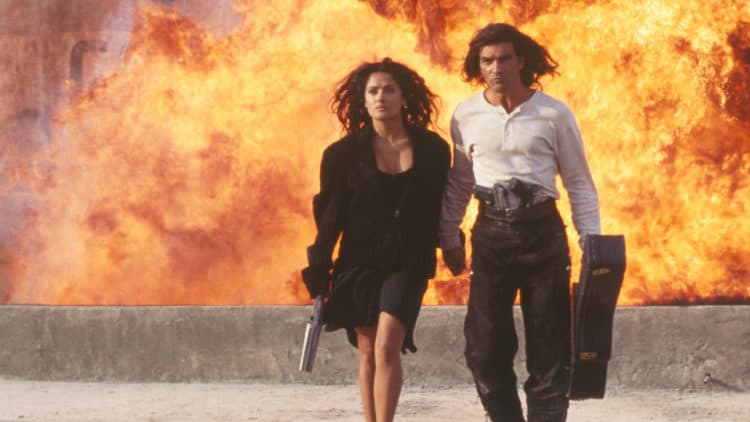 Anytime you watch a movie with Antonio Banderas you’re bound to get a show that you can’t pull your eyes from since he’s got the kind of quiet, cocky attitude that is truly alluring and yet sometimes a bit edgy and hard to take. But overall he’s great to watch since he’s got the kind of energy and charisma that is simply great to see in an actor and the kind of chops that would make most people an instant, overnight hit. His career has gone up and down throughout the years as he’s been featured in big films and then gone back to making straight to DVD movies, but overall he’s been one of the more pleasant individuals to watch since even though he does tend to have the same act at times it fits perfectly to the characters that he’s playing. Some of them are better than others but for the most part he is a great actor.

Sometimes when you have a class that doesn’t want to listen you have to find a way that you can reach them that they can’t tear down. Based on a true story, this tale takes a band of what are dubbed the school rejects and through the workings of dance and all the hard work and responsibility that comes with it teaches them what it means to actually believe in something and themselves. The art of teaching a kid isn’t in the knowledge they gain, it’s in the belief they’re given in themselves that they can go out and get whatever they want, they just need to show up to get it.

AIDS is a very real thing and it is a very frightening thing, which means that those afflicted by it and those that care about them are going to react in various ways when they receive the news that their partner is in fact in very serious danger. Unfortunately doctors don’t always take the view of caring about others as being good enough to allow them to stick around, especially if they’re going to act belligerent in their hospital. One thing that anyone needs to remember, and it is very difficult, is that when you’re in a doctor’s presence they’re there to help the individual, not the people that are with them.

There might be a few inaccuracies along the way in this tale but the great thing about it is that the entire thing is fiction so it doesn’t matter. The northmen that must travel to a far off kingdom when summoned to deal with an ancestral evil that plagues their people are not fully accepting of the Arab in their midst at first, and rightly so. He’s no warrior, he can barely swing one of their blades, and he doesn’t understand their ways. But what he lacks in understanding and strength he eventually makes up for in cunning, wit, and a quick mind that helps them out when they are at their wits end. And by the end, he has become a warrior not unlike them.

Being an assassin is a profession that doesn’t necessarily have any expectancy of a long and healthy existence. There’s always bound to be someone out there that’s willing to knock you off to be considered the top person in the business that will pull down the big contracts. Unfortunately for Robert Rath that one person happens to be Miguel Bane, a freelancer that is looking to make a name for himself at the expense of anyone that gets in his way. It’s a showdown between two of the best assassins in the game as they continue to counter one another move for move, until only one final move is left.

In terms of gunfights this movie gets downright silly and not really believable, but the choreography and the story are good enough to make it work. This was one of his best action movies to date and quite honestly it’s something that has kind of marked his career since it has given a lot of people the impression that he is without a doubt Mexican when in fact he is Spanish, which is in fact different. But he does play the part very well and he manages to push his way through this movie as he attempts to take down every killer that stands in his path, even taking on Danny Trejo at one point despite the fact that Trejo’s character almost kills him. It’s the kind of movie you watch without many expectations, and in that light it’s hard to be disappointed.

He’s proven his worth to the cinematic community more than once and as the years have gone by he’s even gotten back into action a bit, with great results.