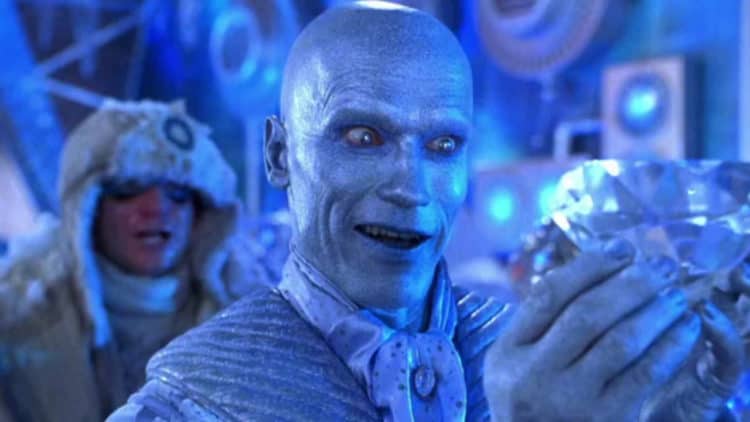 Victor Fries, or Mr. Freeze, as we DC nuts refer to him as, is one of the most tragic villains in DC Comics. And if we’re talking about just the rogues gallery of Batman, this villain is one of his absolute best. Now if you’re one of those guys who has only seen the infamous Batman and Robin movie, then guess what? You should still appreciate this character. Sometimes I forget that Arnold Schwarzenegger actually did play a comic book character. I know it was all kinds of bad, but be honest with yourselves and admit that Batman and Robin is one of those so bad it’s good kinds of movies. In fact, it’s one of my favorites. What can I say, I just can’t get enough of those ice puns. Now Batman and Robin made Mr. Freeze look like a joke character, but just look into his history and you’ll know he’s anything but. You don’t even have to read any comics with him first. I actually got my introduction to Mr. Freeze with the legendary animated series from the ’90s. If you have HBO Max, go watch his debut in that animated episode, the Daytime Emmy Award-winning episode Heart of Ice. There’s a reason why that episode helped catapult the classic animated series into legendary status. The Heart of Ice episode actually made me rethink if the Batman animated series was actually for kids.

If you needed to be reminded that Batman was always meant to be dark, just watch how they did Mr. Freeze. Not only was this episode dark, but it actually brought some tears to the eyes of many fans. I dare you to watch the episode from beginning to end and not cry. It’s almost impossible. Heart of Ice not only explores the heartbreaking origins of Mr. Freeze, but it also shows us why he is truly one of Batman’s most tragic villains. From the very beginning, the primary motivation behind the criminal pursuits of Victor Fries was to save his dying wife Nora. In almost every iteration of the character, his terminally ill wife Nora is kept in cryogenic stasis and kept in an “ice” chamber. Get it? Okay, so it’s more like a cryogenics chamber, but you get the idea. The point is, everything Mr. Freeze does is not for his own benefit, but to bring his wife back from a place she may never come back from. Now of course, he’s willing to commit any heinous criminal act to save her, which is where he find himself in conflict with Batman.

You can go watch the Heart of Ice episode from the Batman animated series or you can go play the Batman: Arkham Origins DLC Cold, Cold Heart. Guess what? It’s pretty much the same story. Batman has to stop Victor Fries from murdering his old boss Ferris Boyle out of a burning desire of revenge. Of course, Batman eventually discovered the truth behind Fries’ vengeful quest and took pity on him. But still, that didn’t stop him from beating the complete snot out of Mr. Freeze. His iconic freeze gun wasn’t even enough to help him. Oh, but that doesn’t matter, because that weapon is half the reason Mr. Freeze is so cool. No pun intended. Almost all versions of Mr. Freeze has that gun. One of the very few versions of the character that didn’t use a freeze gun was the animated version from the 2004 cartoon series, The Batman. Unlike most of the other versions, this Mr. Freeze actually had ice powers. That’s pretty unusual for him, considering the freeze gun has been with him since the beginning. Oh, and while his wife Nora was mentioned in this cartoon, he rarely acknowledged her existence. He was motivated by pure greed, rather than love. That’s probably why this version of Mr. Freeze didn’t feel like the one we all fell in love with.

But if DC is going to add some new little nuances to Mr. Freeze, it better have some kind of unique features. In fact, I have a feeling some fans might feel like Mr. Freeze can’t work in live-action movies after Batman and Robin. Okay, that was a bad start, but he can have another go. The obvious next step would be having him appear in the DC Cinematic Universe because of his appearance and freeze gun. However, I think he can fit into a more neo-noir setting, much like the new DC universe that Matt Reeves is setting up. If you’re not yet hyped for The Batman, then go watch all the trailers. I must say, it has to be my top most anticipated movie of this year. There are many classic Batman stories this movie draws inspiration from, the most notable one being The Long Halloween. That classic sums up everything a Batman story should be, which is primarily a noir detective story. While I’m excited to see how this new take on Batman’s world plays out, I believe Mr. Freeze can fit into the more neo-noir setting.

You want to know why? If you’ve played the Arkham games, then you’ve probably played the Batman Telltale games. In season two, we got to see another version of Mr. Freeze. But what separated this Telltale version from the other ones? Once again, he didn’t have a gun. This Mr. Freeze had a specialized cryogenic gun that froze anything he touched. This was an intriguing little nuance that made him stand out compared to the other versions. But his undying devotion to save his wife remained the same, hence his participation in the Pact. On top of that, this Mr. Freeze wasn’t totally dependent on the suit and didn’t have the glass dome helmet. This gave him a more grounded look and the glove actually seemed more practical. This is the kind of Mr. Freeze we can see in this new Batman universe. And let’s not forget that Mr. Freeze did appear in The Long Halloween comic. Granted, he didn’t have the most significant role, but he did his usual thing when he did appear. His thing was just freezing whoever he wanted. It should be the same for a villain role in a future Batman sequel. And if Matt Reeves wants to make him stand out, I think he should use the Telltale version as inspiration.