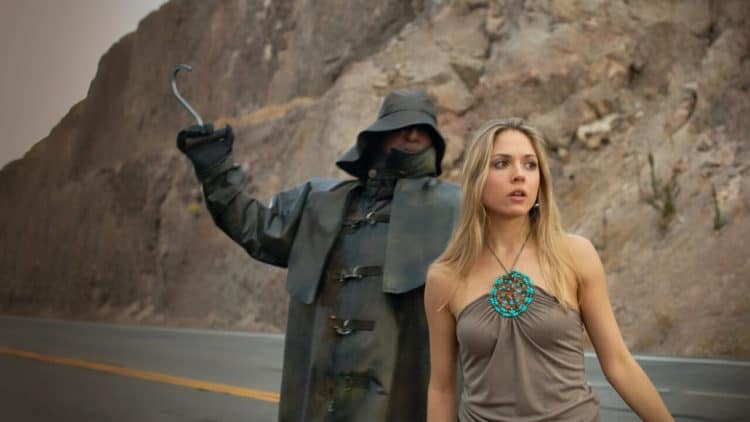 Did you know that there was a sequel to the 90’s slasher film? Don’t worry, this was a direct-to-DVD feature so it’s understandable if you didn’t. However, I Still Know What You Did Last Summer didn’t end in the Bahamas as a hooded killer terrorized a new cast of characters. Jennifer Love Hewitt‘s Julie, Freddie Prinze Jr.’s Ray Bronson, and Brandy Norwood‘s Karla Wilson – the remaining survivors of the 1998 flick – never make any sort of appearance for the final film, despite the obvious sequel tease at the tail end of Part II. Just assume Julie had another bad dream and move on. I Know What You Did Last Summer is an iconic guilty pleasure. It’s bad, but in a “so good it’s bad way”. The sequel is also bad, and more importantly, boring. Somehow, I’ll Always Know What You Did Last Summer manages to be extremely worse. Look, direct-to-DVD sequels have a reputation of generally being god-awful films; I’ll Always Know What You Did Last Summer proves that reputation is correct. So, what makes this installment worse? It’s essentially the first film all over again, but with several ridiculous twists and turns. First, another accidental kill takes place. This time it’s PJ in a stunt gone wrong. Apparently, this group of morons thought it would be a great idea to prank the town with a hooded serial killer slashing away at a festival. PJ gets into a fight with the “killer” and skateboards off a roof; He was supposed to land on gym mats; however, the mats are removed and he’s impaled through the back of a tractor. What follows is essentially a repeat of the original film.

The gang decides to remain silent over the accidental death. We catch up with the group one year later, who happens to return back to their little country town. As you may have guessed, a mysterious “fisherman” starts picking off these characters one-by-one. Here’s the thing, I’ll Always Know What You Did Last Summer doesn’t bring anything new to the table. To be fair, the original films didn’t bring anything new as well. There aren’t any inventive kills or interesting characters to follow. Hell, the acting is atrocious. I can at least acknowledge that the acting in the first two films is solid. I Always Know What You Did Last Summer looks extremely cheap, even though the make-up and effects for the kills do look great. The film doesn’t try to take any risks that could possibly take the franchise in an exciting direction, predictably plodding along as each of the bland characters are viciously killed in the film. Here’s the kicker, PJ isn’t the man behind the murders. Its…zombie Ben Willis! I’m dead serious. While Muse Watson – who played Ben Willis in the first two films – isn’t playing the hooded psycho killer this time around, it’s clear that it’s the same guy who paraded around in the black slicker in the previous entries because the two installments are heavily documented. It doesn’t make a lick of sense. This franchise has never had a supernatural element to it. Granted, Ben Willis has Michael Myers-like power in refusing to die, but even that wasn’t presented in a matter that made it seem supernatural. This film firmly puts this franchise in the grave because it simply has no value. This feels like a fan fiction movie by a first-time filmmaker.

The overall look of the movie is extremely bland and the tension is at an all-time low. You know who’s going to die in the exact order they’re going to die in because it doesn’t even try to differentiate itself from the previous installments. A lot of the “scares” make no sense. In one scene, one of the characters sees “I Know What You Did Last Summer” written in water on concrete. Speaking of the characters, they’re stupid, but I guess that’s the entire franchise’s trademark at this point. The four remaining survivors have any opportunity to escape town away from zombie Ben Willis; however, one of the members brings up an important music gig with high-level agents attending. Never mind the fact that a mad man with a hook is trying to kill her! I’ll Always Know What You Did Last Summer is a movie that shouldn’t exist. It fails at being a competent slasher flick and it is too boring to be put in the “it’s so bad its good” category. Just stick with the first two films if you need your I Know What You Did Last Summer fix.