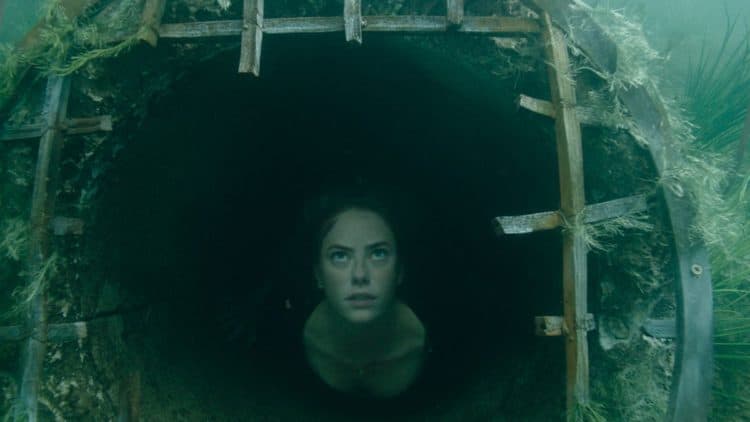 Whether it’s the unforgettable blockbuster Jaws that scared the entire world in 1975, to the laughably bad Sharknado, creature features have a special place in the hearts of audiences who want to see some special animal action. While the likes of Godzilla and A Quiet Place are dominating the landscape, a special little film went under the radar in 2019 called Crawl, which stars Kaya Scodelario (The Maze Runner, Extremely Wicked, Shockingly Evil and Vile) and Barry Pepper (True Grit, Saving Private Ryan); The film centers around Haley and her father Dave, who are trapped within their family home due to a huge hurricane; however, both soon realize that they have an even greater threat than the rising water level, which is a murderous pack of gigantic alligators. Surprisingly, Crawl is a low-budget horror feature. It features less than ten characters, mainly stays in a single location, and doesn’t have a name cast. This is actually a big advantage that Crawl has over a film like Godzilla.

One of the main issues of the Godzilla reboots is the huge cast that takes center stage. In turn, we’re following a bunch of nothing characters and the plot becomes muddled due to the abundance of names occupying the screen. Since Haley and Dave are the main focus here, the film doesn’t waste any screen time with bland characters and the simple plot allows for audiences to get what they came for, which is alligator action. Of course, the downside is that anyone not named Haley and Dave ends up on the alligator lunch menu; however, given the lack of screen time that Godzilla gets in his own movie, it’s okay that a couple of humans are disposable. However, Crawl wisely uses the hurricane as another antagonist, with Haley and Dave being forced to swift gears due to the rising waters. Even when the two aren’t battling bloodthirsty CGI gators, the tension remains high because they’re fighting something that they simply can’t stop, mother nature.

Crawl isn’t some deep and character-driven film. It’s a simple story that gets you from point A to point B. Luckily, that simplicity is what benefits 2019 horror film. Crawl knows that it’s a creature feature first, and the film wisely sticks to its core premise with two likable leads. The beginning opens up with Haley as a competitive swimmer and the overall dynamic between her and her family. It’s a simple opening sequence, but it packs so much necessary information that’s vital to the overall story. It’s not the smoothest or flashiest opening you’ll ever see, but it gets the job done. Too often, horror films tend to jump into the action within the first few minutes and kill off some unnamed victim that the audience could care less about. Granted, this is effective to open a film. It gets the people right into the movie and tells them the ride that they’re in for. However, if done poorly, it can easily take audiences out of the film. Had Crawl opened up with alligators chewing on some innocent soul at a river or lake, it would get you into the action, but then the clunkiness of Haley’s backstory would’ve stuck out like a sore thumb.

As previously stated, Haley and Dave are likable protagonists and it helps that the talents of Kaya Scodelario and Barry Pepper elevate the role. They feel like real human beings because their reaction to the situation is realistic, and director Alexandre Aja makes the smart choice of not making these two appear immortal. Crawl could’ve easily been a difficult slog based on the family issues that the father and daughter clearly have; however, that drama isn’t focused on once the hurricane starts. In terms of the alligator, they look good for CGI monsters. Can you tell that they’re CGI? Yes, but it’s not in a way that’s distracting. The alligators actually look great when they’re outside of the water, whereas under the deep blue sea the CGI is more exposed. The kills are solid. Like I said before, Crawl knows what it is so it delivers some sweet gator action. You’ll instantly know who lives and who dies but it does satisfy the blood lust. Despite remaining in one location for a good portion of the second act, the film never feels repetitive because Aja finds a way to rack up the tension without repeating the same beats. Crawl is a great popcorn film that doesn’t necessarily challenge its viewers mentally, but it doesn’t insult anyone’s intelligence. It’s easily one of the best creature films of the last several years, alongside A Quiet Place.