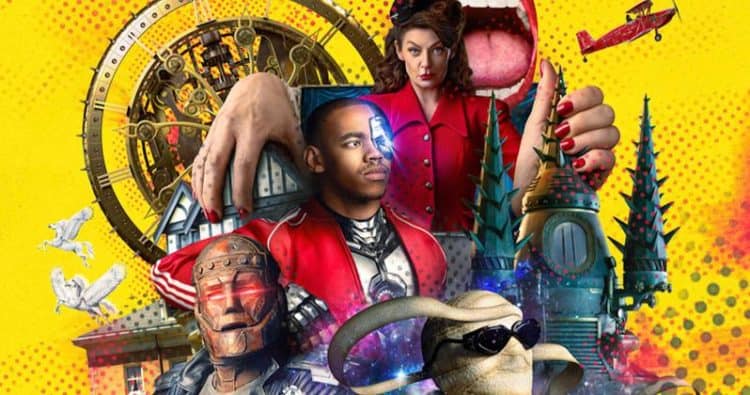 Just when you start thinking that the Doom Patrol can’t get any crazier it’s easy to be reminded that such a thought is rather foolish since OF COURSE it can. Season 3 is already looking like something that is going to feel like a giant acid trip mixed in with a superhero show and plenty of trippy images that people will have to see to believe. It sounds a little cliche, I get it, but after so many years of watching shows and movies like this the cliches are bound to run free and pop up now and again when talking about such subjects. But from the look of this trailer, it’s bound to happen that the Doom Patrol will find themselves a little out of their element once again, which is hard to imagine after all that’s happened to this point. With only two seasons safely tucked away one would kind of expect a lot more craziness to be on the way since groups such as this tend to get into a whole range of madness that plays to their unique skills and powers.

Plus, for a TV show, the effects have, thus far, been absolutely amazing and yet confined to the small screen in a manner that’s just shy of being utterly amazing simply due to the fact that the effects are being held to a budget that TV shows might not have most times. That doesn’t take anything away from the show as it’s been seen in the trailer, but it’s definitely noticeable. Still, as I said, it doesn’t take anything away from the show since watching the trailer makes it obvious that fans of the Doom Patrol are likely going to be pleased since it already looks pretty awesome and will no doubt be something that a lot of people will fully enjoy once it arrives.

The dire implication of time travel though and everything it entails is bound to be a big sticking point in the season since the idea of what could have happened and what might have been prevented usually comes into play with time travel since a lot of people tend to think of what might have been had someone done something differently at a given time. With the Doom Patrol there are likely a lot of questions that will come to mind since something done differently in the past could have affected a lot of them, and given that they’re not the happiest, most well-adjusted bunch in the world, it’s fair to think that they might have wished for something different to happen. Whether they would take the risk and make something different occur is hard to say, but in season 3 it’s looking as though there’s going to be plenty of chances to find out. Looking at the trailer it feels as though this season is going to see a lot of tension build up between the team over a few different matters that might need to be resolved before they can continue on, especially if there’s any chance that they might want to use the benefit of time travel to alter their situation in any way.

So far the Doom Patrol has been kind of crazy, off-kilter show, but people have definitely enjoyed it since they’ve been watching. A lot of folks might have walked into this show not knowing that much about it and possibly finding that they recognized only one character out of the bunch. But enough have stuck around to make it clear that the show is something that people happen to enjoy and are willing to keep watching in order to keep it on the air. Out of the many superhero shows, there have been several that have come in with a serious bang and have dwindled noticeably over the years, but so far Doom Patrol is keeping a steady beat to the storyline that was created within the first season. That could be why it’s not fading out just yet since it didn’t exactly start with mile-high expectations, but it did exceed what a lot of people were expecting to see. That’s kind of impressive in an era where a lot of fans want to see something that’s uniquely impressive, especially since the show has kept things relatively the same since season one as things continue to get progressively crazier as things go along.

But that might be the trick that’s needed to keep this show as popular as it is at the moment since stretching too far too fast might not be the best idea. Some shows do too much and end up overwhelming the audience, but so far Doom patrol has yet to do such a thing. Maybe it will continue to amaze and entertain people as time goes on. One can certainly hope so.