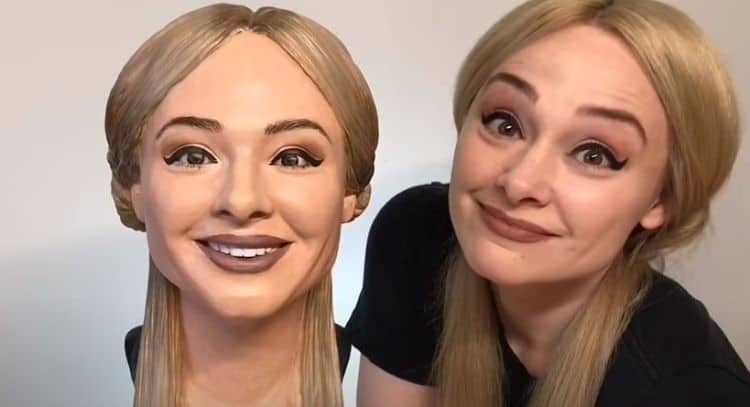 Cake in realistic-looking forms is definitely an art and it’s something that people have taken to liking lately since it is pretty impressive. One thing that’s interesting is Natalie’s use of modeling chocolate instead of fondant, but as she does mention this is a preference and the fact is that modeling chocolate does hold its shape better once it settles and dries. Unlike fondant though, modeling chocolate apparently isn’t that tasty according to some folks, while fondant is something that a lot of people will pick off a cake when they eat it due to the texture more than the taste. In essence, modeling chocolate is melted chocolate mixed with corn syrup, and fondant is more like icing, but a lot of it in a very packed space that can hit with a punch of sugar that some folks don’t care for. Anyway, moving on, the frame she makes for this cake does bring to mind the idea that with too much weight focused on either side of this thing it could topple pretty easily, save for the wooden dowel she’s used for the plant leg of the T.Rex, which is apparently enough to bolster the entire thing. Still, once she gets to painting it with food coloring it’s easy to see how the thing shakes, and it’s easy to imagine how it would tip without any hesitation if anyone decided to put too much weight on either end.

But Natalie is a professional obviously and knows what she’s doing. But watching this thing take shape one still can’t help but be amazed at how quickly she goes through each step of the process, carving away the cake and filling as she forms the body of the T. Rex. The modeling portion is nothing short of amazing since she appears to have a tool for every little wrinkle and skin fold that she decides to give the creature, and her use of detail is amazing. Talking to dinosaur experts though would likely have this creature looking much different than the model she took the inspiration from in Camp Cretaceous, since the moment Jurassic Park came out those that have been studying dinosaurs their entire lives had something to say and it was a remark that the terrifying lizards that are seen on screen didn’t look quite the same way that we’ve come to think of them. Much of what is thought to be the reality of dinosaurs and their appearance is the best guess at most, but the consensus among the scientific community appears to be that they didn’t look quite like what we’ve come to believe. For the sake of entertainment and for this video it’s best to just go with it and admit that what Natalie managed to put together is quite impressive.

Anyone that’s made a cake in the past can feel at least a small stab of envy at how easy she makes this look since a lot of us probably couldn’t even pipe the words “Happy Birthday” on a cake without botching it so badly that it came out looking like gibberish. But one thing about this kind of skill is that it had to have taken a while to develop, and her skill in making everything look so real had to come from studying various pictures and subjects intensely before really getting the idea of how everything should look. The fact that it might have taken her a while doesn’t take anything away from the sheer skill that she possesses, since the truth is that she’s talented enough to take on just about any project and she has plenty of videos that show her taking on other projects that look absolutely real by the time they’re done. It’s likely that anyone could do this if they had enough patience, time, and willpower to sit and sculpt one cake after another until muscle memory took over and helped to simplify the process. That wouldn’t be quite enough, but it would certainly help in learning how to handle the tools, how to position one’s hands in order to take on different angles and motions that would be needed for a project such as this, and how to meet each new challenge with a readied set of skills that could adapt to what was needed.

Among the many different skills that people love to show online, this feels like one that’s very specific and might not have the same applications towards everything, but it’s still a skill that people are willing to pay for, meaning that so long as Natalie can find customers that it’s something that she can excel at. It’s kind of fun to wonder just how big of a project she enjoys doing and what her limitations might be when trying to create something.