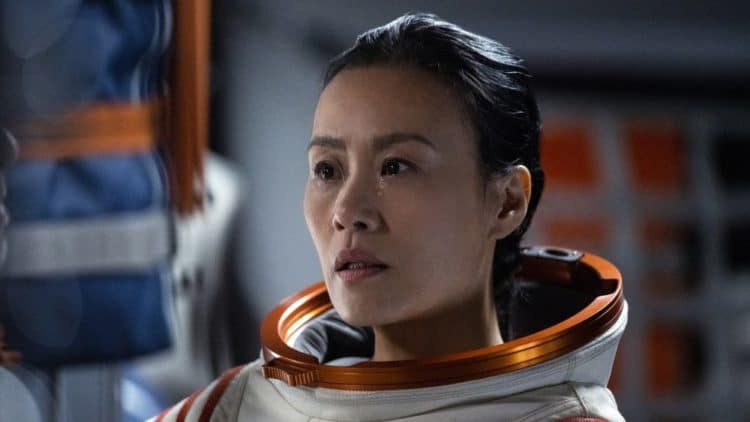 Vivian Wu’s journey through acting has been a very interesting one. She made her on screen debut in 1983 film, Forever Young and it didn’t take long for her career to take off. She spent several years doing Chinese productions before into Hollywood and landing roles in American movies and TV shows. However, eventually Vivian decided that she wanted to take a break from the American, however, she continued to act in China. Now she is officially back in Hollywood and her fans couldn’t be more excited. Her role in the 2020 TV series away, marks her first Hollywood production in more than 20 years. Keep reading for 10 things you didn’t know about Vivian Wu.

1. Her Mom Is A Famous Actress In China

Becoming an actress was almost inevitable for Vivian. Her mother, Zhu Manfang, is also an actress who rose to fame who appeared in several Chinese productions during the 70s and 80s. Manfang’s most recent on screen appearance was in the 1999 TV series, My Cousin Ji Xiang.

Even though acting has always been important to Vivian, she decided to study something else when she went off to college. She attended Hawaii Pacific University where she earned a degree in tourism. However, it doesn’t look like she’s ever pursued the field professionally.

3. She Is Passionate About Working With Charities

Helping those around her is something that has always been important to Vivian. Throughout her career she has worked with several charitable organizations. In 1999, she even started her own organization called Vivian Wu and Friends Educational Charity Foundation, but it’s unclear whether or not it still exists.

4. Her Husband Is A Director

In 1996, Vivian Wu married director/producer Oscar L. Costo. The couple doesn’t have any children together. Oscar has had a very successful career in the entertainment industry. One of his most recent credits includes producing a few episodes of the popular TV series, In Plain Sight, in 2008.

5. She Was Once Voted One Of The Most Beautiful By People Magazine

Vivian’s acting skills aren’t the only thing that has gotten her a lot of attention over the years. Her good looks also haven’t gone unnoticed. In 1990, People Magazine included Vivian on their list of The 50 Most Beautiful People in the World. The list has also named lots of well-known people including Jennifer Lopez and Goldie Hawn.

Even after spending so many years in the industry, Vivian has never been the type of person who enjoys sharing all of the details of her personal life. She prefers to keep a low profile. She doesn’t appear to be active on social media and when she does interviews she likes to keep the attention on her professional life.

7. She Started Acting As A Teenager

Most people would probably agree that almost everything about them has changed since their teenage years. For Vivian Wu, however, one thing that hasn’t changed is her love for acting. She started acting when she was a teenager and got her first on screen role when she was only 18.

Being in front of the camera is what Vivian is best-known for, but she’s done some work behind the scenes as well. According to her page on IMDB, she has also produced a few films. The most recent film which has her listed as a producer is the 2010 movie Shanghai Blue.

9. Away Was The First American Script To Excite Her In Years

About 10 years after entering the industry, Vivian decided to move back to China to be near her father who was suffering from health issues. While there, she continued to receive scripts for American projects, but nothing quite captured her attention. But when she saw the script for Away, she knew right away that the project was something she wanted to be a part of.  She told Entertainment Tonight, “This script came to me while I was shooting in the mountains playing an Empress from a thousand years ago. So to me, the fact that I would be wearing a spacesuit and going to Mars with Hilary Swank sounded fantastic to me.”

Vivian hasn’t shared much information about her religious beliefs, but it appears that she does have strong faith. During an interview for Away, she was asked what item she would chose to bring with her into space if she were a real astronaut. Vivian said that she would bring the Bible because it’s “the wisest book of humanity” and would help her stay positive.