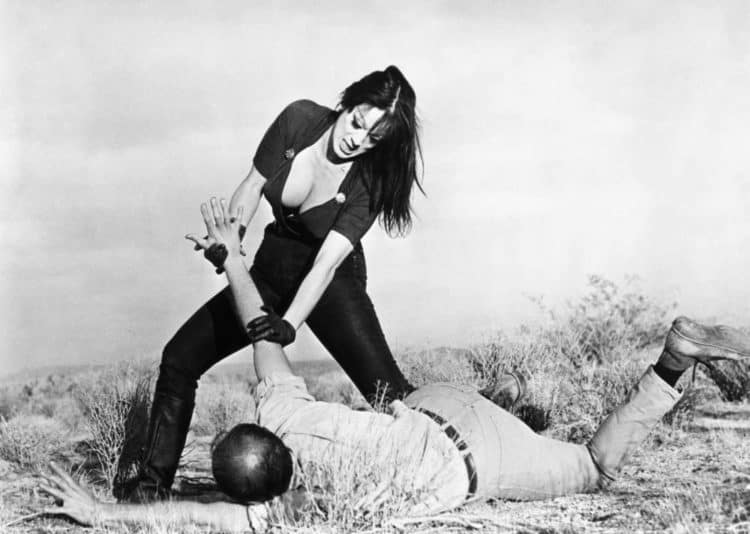 There’s a reason that Tura Satana was an impressive and kind of scary person during her peak years, and only a part of it has to do with the tale that’s told of what happened when she was a young girl. The whole story of her being gang-raped when she was 10 is horrible, but the idea that she went on to train in the martial arts and eventually get even with those that raped her over the next fifteen years following the incident is hard for a lot of people to believe. Whether it’s entirely truthful or not is kind of irrelevant, it’s the fact that the story even exists that makes her legend that impressive since on-screen she was something of a whirling dervish of energy that no one wanted to mess with since the perception that she was undeniably tough wasn’t something that anyone was willing to test to such an extreme. To this day a lot of people might not even know who Tura Satana was, but looking her up isn’t hard, and in the process, coming to the realization that she was a woman that many wouldn’t think to mess with on purpose is even easier. If there’s any single woman that can be credited with making it clear that women can be tougher than they look it would have to be Satana since during her peak years she was one of the toughest women on screen, and in a time when women were either damsels in distress or were otherwise seen to be weaker than men, this was a huge accomplishment.

A good portion of her work was done in the 60s and 70s, but she did manage to emerge in the 90s and 2000s as well, though she passed away in 2011, well into her 70s. By the time she passed, Tura’s legend was still just as secure as ever, but it had been nearly forgotten as the passage of time and the emergence of more and more female actors started to take on tougher and more demanding roles, showing that women could in fact match and even overpower men in action movies when the script called for it. Women have been claiming bigger and more prominent spots in the movies for decades now and it does feel as though Tura is one of those that can be credited with showing women the way since her own career was made up of such great moments as that which can be seen in the picture above. The type of characters she played in the movies were never wilting flowers or damsels in distress since she was a tough and very forward individual that made it clear that this wasn’t who she was. It could have a lot to do with the tale of what happened when she was a young girl and it would make a great deal of sense that she didn’t want to feel powerless or even give the impression that she might be in any way vulnerable, not even if it was written into the script.

Feminine roles have dominated a lot of what women have been asked to do in the movies for quite a while, but thankfully things did start changing at one point as it was made clear that women are fully capable of taking on tougher roles that can see them taking on men and even beating them to a pulp if it’s believable. In Tura Satana’s case, it was entirely believable since she had the training and the kind of attitude that made it clear that she wasn’t backing down to anyone unless she felt like it. Women today are becoming just as tough and some are already there since the idea that women can take on such roles is nothing short of great and owes a lot to those like Satana who did their best to help pave the way. Women today aren’t all as tough or as assertive as Tura, but the fact is that the movies we see in this day and age have changed in a big way since women are no longer relegated to being the prim and decent ladies, at least not all the time, or the damsels waiting for the hero or the rough and tumble protagonist to come save them. A lot of times in movies these days women will show that they’re fully capable of being as rough and tumble as anyone and can take on the kind of stunts and actions that at one time were only given to the male characters in movies.

Whether people know it or not Tura Satana was definitely one of those responsible for making it clear that women are able to do pretty much anything when it comes to a movie, since she led by example more than a few times.