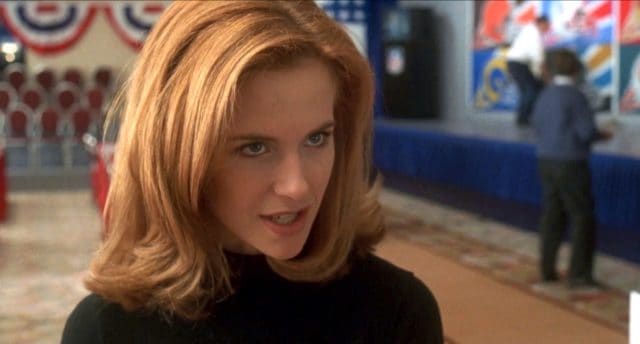 Kelly Preston is hot with a capital H. There, now that that is said and out of the way, we can get to just why she’s considered to be one of the most underrated and greatest actresses in Hollywood. To be honest she’s had her time in the spotlight more than once but it seems as though she’s never really got the same billing as other actresses that are equally talented and good looking. Preston though can deliver on point whenever she’s on camera and has been showcased with some of the greatest names in film history, so it’s safe to say that her reputation as an actress is sound and she won’t go down in history as just being the wife of John Travolta.

Despite all the credits to her name, and there are many, Preston absolutely shines in these selections.

Life is not life-proof, to improve a little on one of the slogans of this film. Imagine dating a woman for a short time and then not seeing her for seven years. Then take it a little further and imagine that she comes back into your life, with children. And now, the icing on that increasingly unstable scenario is that she has kids, and their yours.  As great as kids can be they can also derail a person’s life if they haven’t been used to them in, well, ever.

As likable and lovable as she is in Old Dogs, she is just flat out brutal in this film. This shows how her range is actually quite impressive. She knocks Tom Cruise on his butt with the greatest of ease which is impressive since Cruise almost never goes down in the movies without some serious punishment. As Avery she is all woman and a little more as she proves with this comical beatdown.

Preston doesn’t seem to age all that much compared to other people. In fact it’s safe to state that she still looks relatively young even now. In this film though she is obviously still quite young.   This shows how long she’s been in the game and how long she’s been rocking it. The film was obviously among the first in her repertoire, but it still stands out as one of her best.

It can’t be easy to lose a child, and it’s a prospect that no parent would ever want to face. In this film Preston is the grieving mother that wants justice for her family, but is still relegated to the weaker role in the family as Kevin Bacon is the father that eventually goes rogue and puts his family in jeopardy when a violent street gang takes them out in retaliation for him killing one of theirs. The back and forth revenge game eventually plays out in a manner that is very common. Eventually only the youngest son is left, and the father is still left with nothing to show for his vengeance.

Sex kitten might be a bit too strong of description for Preston’s character in this film. She does know what she wants however and knows how to get it. It’s comical to see the look on Arnold’s face after his first encounter with the obviously-experienced Marnie, who looks as though she’s ready to go again not long after.

So Kelly Preston doesn’t get the big roles. That doesn’t seem to matter though. She’s good at what she does and seems to enjoy her time in Hollywood whenever she has a part to play. That’s more impressive than back to back hits sometimes.

*Also a shout out to her role in For Love of the Game.