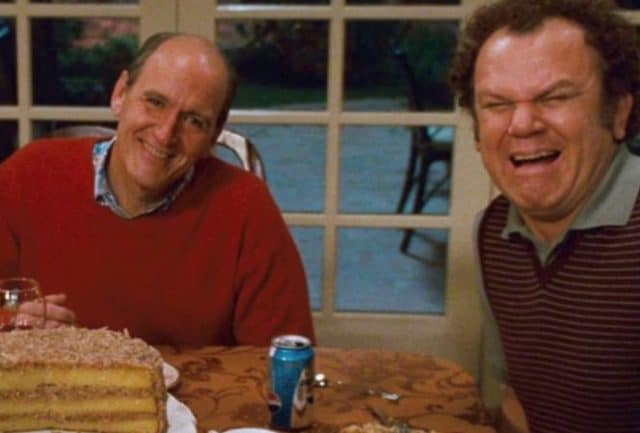 WELCOME to the YELLING game with John C. Reilly! This guy can yell, but it’s like riding a vocal rollercoaster since it comes and goes and comes and goes in waves and only sustains itself when he really sees the need to drag it out. Otherwise it’s a big burst and then a loud-speaking voice that seems to talk in for a lot of roles. He’s a great actor and a funny guy and he gets the kind of attention that he seems to enjoy since a lot of times it seems like he’s one of the best supporting actors there is. As far as being a lead he’s not that bad but it also doesn’t seem like something he chooses a lot, or gets asked to do. Reilly is the kind of guy that’s there to make people look good while still doing an awesome job that makes him look great.

If that makes sense, that is.

40-year old men. Living at home. Acting like 4-year old kids. I have to admit I didn’t see a lot of value in this movie at first and I still kind of don’t since the premise is a little shaky to me. But a lot of people loved this movie so hey, to each their own and so on. It has it’s moments I think when it actually shows some brilliance but it seems more like a chance for Reilly and Ferrell to just act out for two hours.

Shake it, before you bake it! Cal wasn’t the brightest guy in this movie, but then neither was Ricky, he just had the quicker foot and the better reputation for going fast. When it comes down to where his loyalties lie though Cal isn’t shy about stomping on the gas and allowing his best friend to overtake the one enemy that neither of them can stand.

You can tell that Reilly’s character isn’t too wild about the whole undercover student aspect of this scheme. After all it’s not exactly legal and the reporter going in as a high school student isn’t really that great at connecting with people her own age, let alone teenagers. But somehow Josie makes it work and everyone else is proven wrong, right up until her secret gets let out.

Yeah because the guy’s only been there for 28 years he must not know the lay of the land and how to avoid the worst of the baddies, right? It’s interesting how in every movie the expert is almost never listened to until it’s too late. Some battle-hardened commander always seems to want to avenge his fallen men rather than listen to reason and help the others survive.

Wreckit Ralph is a cool character, not just because he’s big and strong, but because he’s the type of antihero that people have come to love over the last few decades. He’s not the supreme bad guy like Turbo, but he’s not a do-gooder like Felix either. He’s just a guy that wants a little nod his way now and then.

I’m bad, and that’s good. I will never be good and that’s not bad. Well said Ralph.