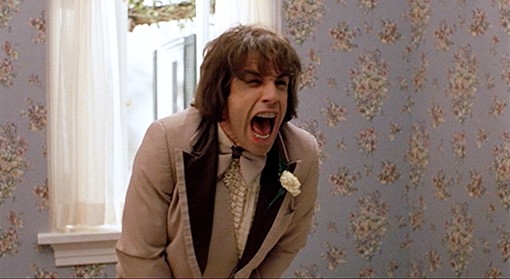 Welcome back to the Yelling Game with Ben Stiller! His shrieks have actually been likened to that of a woman he’s so shrill but somehow you get the feeling and the emotion behind it even more when his voice raises in pitch like that. His yells don’t normally last for a long period of time but they do carry a lot of volume, enough that you might be wringing your ears out soon after he’s done. Yet for all that he does get a mention for something like this since he’s let out some true ringers in his day that have made him stand out as one of the more vocal and louder individual on the big screen. Normally he’s rather quiet, calm, and sometimes downright sinister or even goofy, but when he lets it fly I’d bet you could hear it a couple of blocks over.

This is one of those movies that’s been relegated to the archives since it really didn’t do that well at the box office. But Stiller plays the villain at a fat camp for kids that need to lose a few pounds. The trouble is that when he takes over his idea of losing weight is what most other people would call starvation.  He’s definitely over the top in this film but it works out pretty well.

You don’t know how tall Vince Vaughn really is until he stands next to Ben Stiller. And you don’t know how disturbing Stiller’s act can be until you watch this movie. Seriously, he’s like an evil wannabe genius from the 80’s. Being the bad guy seems to agree with Stiller when the role has to be really campy and so over the top that there’s no coming back.

Believe or not you might really pull for Mr. Furious despite how hard he tries, and fails, to really do anything of note throughout most of the movie. By the end though he’s the one to take down the main bad guy, with some help obviously, and bring his team together just a little more. I’m not sure if I can really buy into Stiller as a superhero, but it’s a good try.

2. Night at the Museum

Who else would get into a nonsense shouting match with a wax statue of Attila the Hun? There are a lot of great moments in this movie but this was one of the best and better than anything, it involved yelling!  Of course the kindly Egyptian king standing off to the left could have spoken up about being able to converse with Attila just a little sooner.

1. There’s Something About Mary

Oh this scene. Oh lordy, lordy, ouch. How many guys watched this scene and either winced in imagined pain or laughed because they’d done it before? I think I actually felt bile in the back of my throat the first time I sat through Stiller getting his frank and beans caught so horribly.