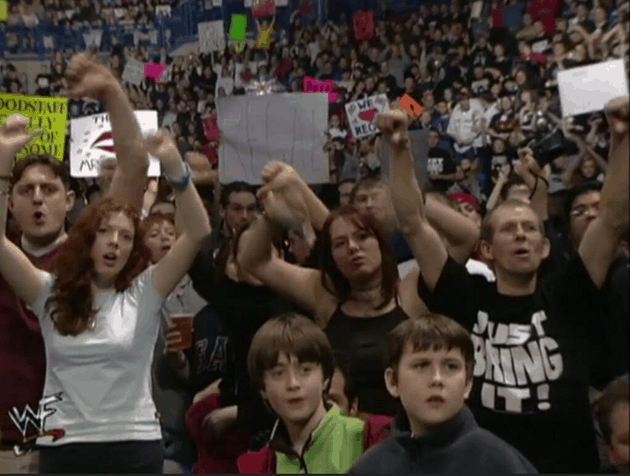 If you’re going to go with a “picture of the day” then this one’s clearly it.   Before the Harry Potter movie franchise really hit its stride and became a billion dollar plus enterprise, a first movie by the name of Harry Potter and the Sorcerer’s Stone was released.   If you can believe it that movie came out in 2001.  It was the start of the career of its three main stars Danielle Radcliffe, Emma Watson, and Rupert Grint.  But it would also launch the careers of all of Harry’s friends in the movie.  Among them was the guy who played Neville Longbottom, Matthew Lewis.

Remember Neville?  The buck toothed sweet heart who was good with plants?  He would eventually become a bigger character and Lewis eventually fixed his teeth.  He’s somewhat of a ladies man these days.  But imagine these kids back in 2001 just hitting U.S. and not having a clue what to do.  What do Radcliffe and Lewis do before they even hit puberty?  They take in a WWE wrestling match.  Whoever captured this picture is awesome.

First of all, is the guy wearing the “Just bring it” shirt their guardian?  Seriously who is watching these two?  It’s also evident this crowd doesn’t have a clue who these two wizards even are.  Can you imagine these two at a WWE event today?