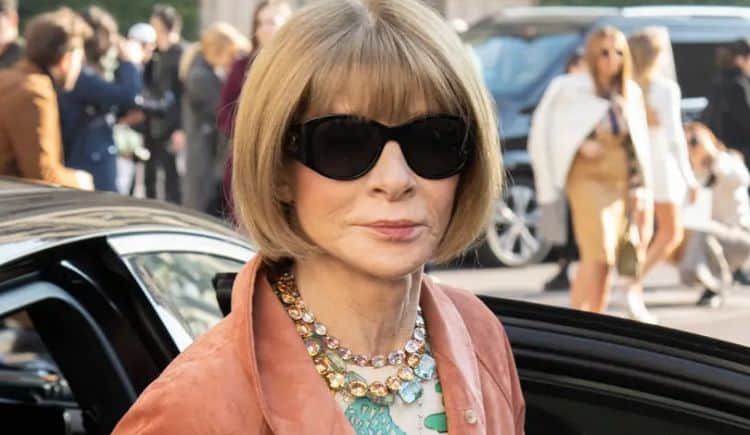 Every fashionista needs a signature accessory. For Anna Wintour, her item of choice is a nice pair of big sunglasses. Wintour is best-known as the editor-in-chief of Vogue Magazine, a position she’s held for more than 30 years. She has become equally as well-known for wearing sunglasses in almost all of her public appearances. The average person probably can’t even remember a time when they’ve seen a photo of Wintour without sunglasses. While the shades definitely add a unique touch to her look, Anna’s reason for wearing glasses is bigger than fashion. Keep reading to find out the real reason why Anna Wintour always wears sunglasses.

Sunglasses aren’t the only part of Anna Wintour’s look that has remained consistent throughout the years. Wintour’s bob haircut has become one of her most recognizable staples. Although most people change their hair at least a few times a year, Wintour’s look has remained constant. In fact, I don’t think we’ve ever seen her with any other hairstyle. Anna herself has admitted that she can’t even remember how long she’s been rocking the bob.

In 2019, she told the Daily Mail that she’s kept her haircut for long for one simple reason: it works for her. During the interview, Wintour said, “The one time I tried to change it, it was a disaster. I had to wear a hat for several months. So I’m way too anxious and too lazy to try it again.” When they said ‘if it ain’t broke, don’t fix it’ this is exactly what they meant. If Anna were to change her hair at this point, most people probably won’t even recognize her.

The story behind Wintour’s bob haircut is actually pretty interesting. According to a recent article from Fashiongton Post, the British journalist, Maureen Cleave served as an early inspiration for Wintour to try a bob. The story then goes on to say that Wintour got her very first bob haircut from Leonard Lewis, who had also cut Maureen’s hair.

Besides her sunglasses and stylish bob, elements of Wintour’s famous look include statement necklaces, leather trench coats, and snakeskin boots.

The Truth About Anna’s Sunglasses

Anna certainly isn’t the first public figure to wear sunglasses almost everywhere she goes. However, when most celebrities make this choice, it’s typically due to a health related issue. That isn’t the case for Anna Wintour. Her reason for wanting to wear sunglasses –even indoors– is surprisingly something that a lot of people will be able to relate to. Anna confessed the real reason for her sunglasses in an interview and said, “They are seriously useful. I can sit in a show and if I am bored out of my mind, nobody will notice… At this point, they have become, really, armor.” Let’s be real, we’ve all been there. Anna’s reason for not walking to take her sunglasses off is an entire mood.

Never the less, many people consider it rude that Anna hardly ever takes her sunglasses off, regardless of the occasion. Wearing sunglasses indoors is also usually considered tacky. As a result, she caught a lot of flack on social media in 2018 when she wore her sunglasses while sitting next to Queen Elizabeth at Richard Quinn’s fashion show in London. People said that it was a sign of disrespect that she kept her shades on while sitting so close to royalty. Etiquette expert, Grant Harrold, who once worked for the royal family, said, “Ms. Wintour should know that to wear sunglasses when talking to another person, with no medical reason, is unacceptable. She should have removed them before being in the presence of the Queen, let alone in discussion.”

However, in photos from the event that showed both women smiling, it doesn’t look like Queen Elizabeth cared much. Anna later revealed that they were sharing a laugh while discussing how long they’ve both been in their jobs. Wintour has been the editor-in-chief at Vogue since 1988, and Queen Elizabeth has been the Queen of England since 1952.

No matter how you feel about Anna Wintour and her sunglasses, the reality is that they’re probably not going anywhere any time soon. There are very few people who could pull of the same look for decades. Somehow, Anna has managed to do it with style and grace. If that isn’t the definition of vogue, I don’t know what is.