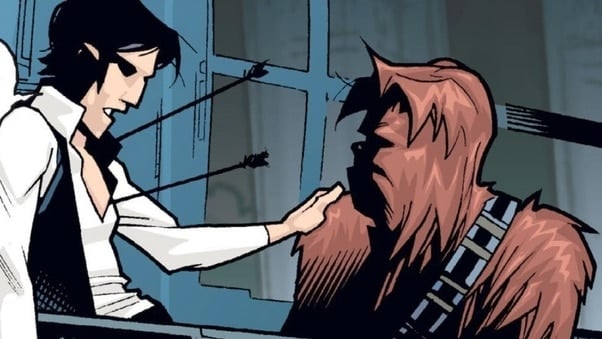 One very big problem with the Star Wars franchise is a big part of what makes it so interesting in the first place since this particular story from a graphic novel that has people thinking is kind of fun and brings in another character that a lot of people hopefully found kind of fun. The story is pretty simple, Han and Chewie somehow find their way through an intergalactic rift and crash land the Millennium Falcon on an unknown planet that doesn’t appear to have any signs of technological advancement. Unfortunately, they run into several indigenous individuals that begin to chase them and end up killing Han as Chewie manages to get him back to the Falcon before he expires. Chewie then runs off and finds a way to live without his friend in the wilds since the Falcon needs repairs that he can’t make without the proper parts. Given the fact that Wookies are a long-lived species, he becomes a local legend, and as a result, the fans are given an explanation to the ever-present Bigfoot legend in the form of something that would make a great deal of sense from a science fiction background. Later on, after quite a bit of time has passed, an explorer comes along in search of the local legend, and he ends up finding the skeletal remains of Han and the long-since rusted out hulk of the Falcon, which might appear like something out of a dream. Of course, this explorer is Indiana Jones, since anyone else making this discovery wouldn’t make sense.

But where some people might get stuck is the fact that Star Wars HAS referenced earth, but in an alternate storyline that obviously isn’t part of the canon. And while it might not say the actual term ‘earth’ there is a very strong correlation to the planet we live on since this is where Indiana Jones happens to come from, along with the Sasquatch legend. It is interesting though how many people want to deny that this is an interesting turn of events, though it could possibly be due to the fact that it deals with alternate realities, which a lot of nitpicking individuals tend to love to point out. Of course, it’s about alternate realities, as the Star Wars canon has been made pretty clear, either to its detriment or betterment, which is uncertain at the best of times and heavily dependent on the fans. But this particular story is kind of fun since it helps to describe at least one local legend that takes place on earth and it doesn’t really mess with the Star Wars idea apart from the fact that Han and Chewie are living out an alternate timeline that sees them both ultimately lost to the Star Wars franchise, which would shake things up in such a massive way that claiming this as an alternate timeline is the only real way to keep the diehard fans from falling all over it like a ton of bricks.

One thing that one can always count on when it comes to Star Wars fans is that they’re going to nitpick pretty much everything since there are millions of fans that want to know and master every last little detail they can in order to have a better handle it on the story than anyone else. Of course, the irritating part about this is that they tend to alienate people in a big way by stating their own preconceived ideas without taking the time to realize that there are many different ways to tell a story. It’s taken some of us to see this through the years and a lot of people still haven’t accepted it fully, but the idea is that a person can take a well-known story and do just about anything they can with it within the realm of fiction since, well, it’s fiction. The great part is when someone works up the nerve and has the imagination to do something like this that makes more sense than people are willing to give it credit for. So yes, Star Wars may or may not have said the name of the earth in one of their publications, but they certainly showed a planet that was easy to identify as earth thanks to one individual. For those that don’t want to see this, that’s fine, but for those that the felt the story was a bit of fun and offered a nice play on a couple of classic stories, it was kind of an interesting read. This isn’t the first time Star Wars has stepped beyond its own boundaries with the help of a skilled writer and it likely won’t be the last. Any issue that a person or people might have with that is, well, kind of too bad…for them.