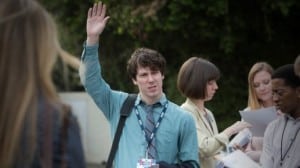 We talked about jobs today–let’s play The Newsroom.

Woe to thee who ride the Romney bus, where everything is cloaked in doublespeak. When you ask questions, you get talking points or personal insults. Has Romney done a 180 on Romney Care? What about abortion? These job figures are disingenuous, no? I’m sorry, were you planning on giving these questions a modicum of thought?

Jim looks miserable throughout this expedition. He doesn’t know what he is supposed to report. He just stares wordlessly into his camera rethinking if reporting is congenial to him. I’m actually very enthralled by this because I’m sure that Sorkin is reflecting the truth of the situation. Reporters must feel manipulated and underutilized when they report this drivel. And yet these are the rules they are bound by. When you try to do serious journalism you are treated like some unsophicated interloper.

And so that is what happened: Jim, Hallie, and Tequila (the mustachioed guy who is preoccupied with semantics) are jettisoned from the bus after making a stand. Fortunately, Tequila had the wherewithal to pilfer some turkey sandwiches. I see a bright future for Tequila.

Obviously all of this material is very politically charged and comes across as partisan. But I like that Hallie calls out Jim for being naÃ¯ve. It’s an important nod to establish that all politicians operate like this. This isn’t singularly an indictment on Romney, although Romney still ends up being the target. It’s a Sorkin show, what do you expect?

Maggie is getting her meds for malaria so that she is cleared for Africa. You know, it’s nice to see Maggie unencumbered by some stupid love triangle (which always seemed derivative of The Office anyway). I never realized how much I liked this character. Her neurosis regarding her medicine was a riot! She googles it and discovers that it can cause depression, hallucinations, homicidal thoughts, suicidal thoughts, extreme fear, confusion, etc.

She immediately starts freaking out, presenting with the prenominate symptoms. “The drug takes about a week to kick in,” explains Mac. “When did you take the pill?” “Ten minutes ago– I’m confused and experiencing extreme fear,” replies Maggie. 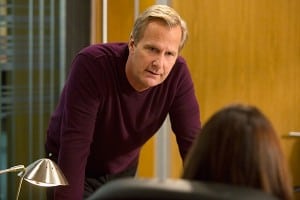 It’s Will’s voicemail that has Mac in a snit. She doesn’t understand why Will is being so cagey about this. What is he hiding?

Here is Will’s voicemail in its entirety: “I’m not just saying this because I’m high–I’ve never stopped loving you. You were spectacular tonight. Can you believe we got Obama [sic]?”

And yes Nina Howard is back. Will meets with her to discuss his feigned illness, which was used a pretext to preclude him from reporting about the anniversary of 9/11. She admires his honesty (about how it was Charlie’s call) and tells him she won’t run it. This will later devolve into a protracted attempt to open a safe, and the failed extortion of Reese.

I like Nina as a character. I think she adds some interesting friction between Will and Mac that doesn’t seem dredged up solely for that purpose; I believe that Will would actually get involved with Nina.

Sloan and Don weren’t bad in this episode (although Don falling in his chair felt way too predictable), but they weren’t particularly memorable either. Also, the Genoa material feels palpably laborious. Maybe this will pay off later in the season, but it presently just feels like blatant dramatic padding.

I’ve been dismayed by The Newsroom’s bizarre rhythm thus far in season 2, but I’m happy to report that “Willie Pete” was a substantial improvement in the overall flow of this show. Sorkin shows will always move too rapidly for my tastes, but I was impressed with the direction here.

It was mainly just a very funny hour of television.  I particularly enjoyed Will and Charlie discussing Joe Pesci’s mortality in Goodfellas, as well as Will screaming about randomly firing people.