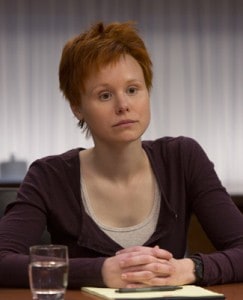 When I was a senior I high school, I was in a car accident. (The song playing on the radio as I crashed: “We Are the Champions.” I couldn’t make this up.) I managed to escape the fray unscathed, but my car wasn’t so lucky; it was totaled. I remember being wracked with unthinkable guilt, guilt on top of my usual dosage of guilt. (I could have used Maggie’s prescription for Paxil.) I was ashamed of everything about myself. I wanted to efface my very existence. And so I flippantly decided to obliterate my definable physical characteristic.

So when I watch Maggie clinically cut her hair in front of the mirror, it makes total sense to me. I get it: Part of her blames herself for the death of Daniel–the boy who gawked admiringly at her blond locks–and she needed to disassociate. It was a poignant scene, marred only by the gratuitous flashback to her reading to the boy at school. (I really didn’t need to be reminded of this. I actually found it somewhat insulting.)

I was jazzed about the melodrama that would ensue in Africa, but I was cruelly disappointed by that expedition. The introduction of cattle raiders when Maggie and Gary Cooper (wielding a camera) enter the classroom was a nice touch; however, the truncated nature of the cuts–the way that it vacillated between Maggie talking to Rebecca Halliday and Maggie in Africa–was not working for me. It kept interrupting the dramatic flow. I understand that Sorkin didn’t want to stray too far from the world of ACN, but if that was a significant concern for him, he probably shouldn’t have written one of his characters off to Africa.

But again, I think that Maggie’s response to the situation was captivating. And I’m interested in where this takes us with Maggie (not necessarily her involvement in Genoa but her general character). This is a woman who once hid under a bed–out of sheer embarrassment– while her ex was having intercourse with another girl. Now she seems, ostensibly anyway, level headed. And I don’t think that is dubious. This African incident would naturally demand more of her, emotionally. 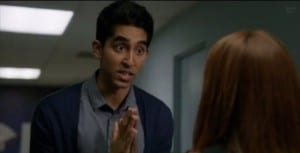 Neal is still plugging away at Occupation Wall Street and gets Shelly to agree to an interview with Will McAvoy. In the parlance of Maggie Jordan, Will murderlizes this poor girl. He makes her, and her movement, look incoherent. This becomes problematic when they learn that Shelly has a tip of Genoa, a story Mac is still skeptical about.

What follows is a humorous sequence of ACN employees (Sloan and Don) attempting to apologize in lieu of Will and failing dreadfully. It’s Will that eventually makes amends, obnoxiously calling out answers as he sits outside of her classroom. He explains that he was using her as a prop to prove his moderate bona fides. Oh, Will McAvoy. You have innumerable stressors, but you’re still such a swell person!

“I’m the rebound and I went to Vassar.”–Hallie Shea

People do not talk like this. This is not your typical interstitial remark made whilst kissing. I guess that sounds like a complaint, but it’s not: It’s so outlandish that I found this amusing.

But let’s back up. Things aren’t exactly auspicious for our trio of Jim, Hallie, and Tequila as they trail the Romney bus. There is a paucity of hotel rooms, they aren’t receiving advanced copies of Romney’s speeches, and they eventually lose the bus altogether. 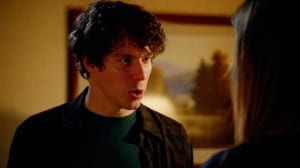 Jim, however, cleverly goads Taylor from the Romney into imprecating him, and he exchanges it for an interview exclusive. He then covertly sends it to Halley. This will consequently get him pulled off the campaign and admonished from Hallie (who doesn’t appreciate the charity). But she later gives him that remarkable kiss and tells him that she wishes he didn’t have to go.

Notwithstanding the cuts in Maggie’s storyline, I still like the overall pace of “Unintended Consequences” much more than the first two episodes. This pales in comparison to last week’s Willie Pete, but I can certainly live with this episode.

And if you noticed that I didn’t talk about n-word-head ranch, it’s because we, ironically, also have advertisers and–bearing that in mind–I don’t know how to sufficiently address this. Sorry, I’m not as intrepid as our heroes at ACN.