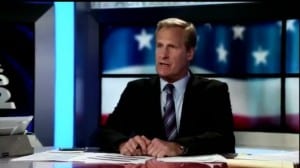 Have you located the cha?– Let’s play The Newsroom.

As evidenced by the title (“Election Night, Part 1”), it is election night at ACN and–in the wake of their Genoa blunder–the stakes are high. “It’s critically important that we not make any mistakes tonight,” says an anxious Charlie. The lawsuit from Jerry Dantana hasn’t been made public yet.* It is slated to go into effect in six hours, and Charlie is still trying to quell the blow. He accosts Reese and learns that Reese actually agrees with him: Reese wants to pay Jerry the sum. Alas, mommy has laced up her boxing gloves and is ready to brawl.

*We also learn that Don is being sued for tortious interference. Evidently, Don described Jerry as a “sociopath” to one of Jerry’s potential employers. Can Aaron Sorkin make Jerry appear to be any more of a colossal jerk in the finale? Tune in to find out.

Things are slightly tenuous during the broadcast. Will, tripped up in his syntax, nearly miscalls Massachusetts for Romney but recovers gracefully. Elliot looks foolish giving the audience a tour of ACN’s statisticians, something that all news outlets are guilty of. (I’m looking at you, CNN.) Sloan also mentions Genoa on the air.

But all in all, nothing too irreparable transpires. 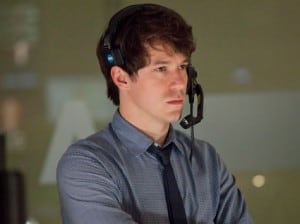 Oh yeah, except that whole Michigan/Mississippi fiasco. Jim! I thought you had standards. What are you doing? No, don’t even bother answering that. I’ll tell you what you are doing: You are breaking my heart! I’m removing the Jim Harper poster from my bedroom wall as we speak. Truth be told, I’m not so hot with state abbreviations either; if I wrote a note about Mississippi and wrote “MI”, I wouldn’t even know what state I was referring to the subsequent day. But that’s why I don’t abbreviate state names. Write it out Jim! Charlie is going to have a stroke.

Unrelated to the broadcast, “Election Night, Part 1” is laden with some hilarious B plots, which Neal perceptively pegs as overcompensation. The best involves Mac. She is the victim of some vicious libel (I guess?) on Wikipedia, listed as a former President of the Oxford Union, when she was, in fact, president of the Cambridge Union. (The nerve!) She implores Neal to employ his computer wizardry and fix it, but apparently you cannot use direct information from the subject of the article to amend it.

Meanwhile, Will is a bomb ready to explode. Mac confronts him about his decision to not fire her. She brings up how he still resents her for cheating on him, that he has never forgiven her. She then insinuates that he refuses to fire her because he is concerned of the consequences to his own image, an image he has been struggling with all year. Insulted, Will tells her what she wants to hear: “You’re fired–end of the broadcast.” To prove that he isn’t so diabolically narcissistic, he then goes back to the broadcast and tells Taylor to lay into him.

I’m not wild about part 1/part 2 installments of television shows, particularly in drama television. I suppose we could say that all serialized television follows this format (a seasonal arc), but it’s not quite the same thing. These paradigms encourage shticks like cliffhangers, and function primarily as a link from one episode to the next. I’m one of those the-episode-as-art people. (Yeah, we exist.) I think individual episodes should both stand on their own merit and move the season forward (see Mad Men).

“Election Night, Part 1” does end rather abruptly on a marginal cliffhanger, but that wasn’t my main issue with this episode. For me, this episode was hard to penetrate. It was ostensibly a prototypical episode of The Newsroom, a telescopic look into ACN on the night of a presidential election. Yet after the great “Red Team III”, an episode entirely devoted to Genoa, I find all of these Genoa interruptions to be–once again–cold. I don’t think that the details of a lawsuit work all that well as interpolated content. I have found it to be inimical to the flow of The Newsroom for most of its second season, and “Election Night, Part 1” was no exception.