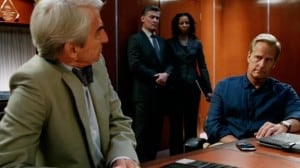 Get it back–let’s play The Newsroom.

Throughout most of season two of The Newsroom, I have been bemoaning this season long arc of Genoa. Last week, I referred to one particular scene as “turgid.” Now I haven’t changed my mind about any of that. I think the set up for Genoa has mostly been clunky and has disrupted the flow of the show. But Red Team III proved that all of the (again, messy) groundwork for Genoa was merely a means to an end, and that end was spectacular (and still in progress).

Earlier this week, Aaron Sorkin appeared on Hardball with Chris Matthews. Sorkin mainly just used this as an opportunity to talk about how much he thinks The Huffington Post does not suck. But Chris talked about Jerry Dantana, specifically he asked Sorkin to help him understand why he dislikes the character so much. Sorkin said that it was because (a) Jerry is an outsider to ACN, and (b) Will McAvoy initially distrusted him.

Well, I can’t imagine how much Chris hates Jerry after Red Team III. After being fired from ACN for doctoring an interview, it is Jerry who is suing ACN for wrongful termination. Jerry claims that ACN exhibited institutional failure. And interestingly enough, now it’s Jim who expresses his own distrust for Jerry for the same reasons as Chris Matthews: “My concern is that I don’t know you.”

The Newsroom is renowned for the manner in which they canonize their characters. This is something that I enjoy. I think Sorkin’s verve for the subject matter is infectious. Red Team III has traces of that, like when everyone is peering at Will for his sage input. (I love those dramatic pauses!)

But there is also a series of questions that linger in the ether regarding the professionalism of ACN here: Is Will’s source Charlie’s source, and were they negligent in ignoring that? Should Elliot have pressed his interviewee about the traumatic brain injuries? Why did Maggie wait so long to tell the rest of the staff that she wasn’t present at the interview with Stomtonovich? (Does this reflect upon her mental stability?) Is Don’s trust in Maggie biased? Could all of this been avoided if Jim wasn’t entangled with Maggie, and thus wouldn’t have felt the urge to board the Romney bus? Did Maggie lead Valenzuela? And most importantly, does Neal still believe in the existence of Bigfoot?

“Everybody knock it off!”–Charlie Skinner

Sorry, Charlie. Anyway–as you would expect–it is on the night of ACN’s most cataclysmic blunder that they receive their highest ratings: Charlie informs Will that they garnered a whopping 5.8 million viewers! And if that isn’t combustive enough, this is happening at a time (the wake of his father’s death) where Will’s anaclisis to his audience has also peaked. Will is consequently so crestfallen that he loses confidence in their judgment and conforms to the prevailing presentation of Benghazi.

In the end, the only thing that seems conceivable to our vaunted heroes is to tender their resignation. They so highly esteem ACN and journalism, and they are riddled with culpability over this whole fiasco. Is Jerry a jerk? Definitely. But Will, Mac, and Charlie all feel that they should have caught this. Leona Lansing, however, does not share their defeatist disposition. She is ready for war.

Notwithstanding my documented issues with Genoa, Red Team III (an episode that was entirely about Genoa) was thrilling. I think the nonlinear format worked well (particularly in the scene with Will and Mac analyzing her interview with Valenzuela) in unraveling the lie that is Genoa. And like Will said, “sometimes it’s just the one thing.” Charlie was given a phony manifest because he fired his source’s son. Jerry was exposed because he “forgot about the shot clock.” And most tragic of all, Leona was denied meeting the illustrious Daniel Craig because of Hurricane Sandy.

(Note: The Newsroom is not airing next Sunday. The penultimate episode for season two airs on September 8th. )