Home
Television
The Newsroom
The Newsroom 2.05 “News Night with Will McAvoy” Review: More Than Words 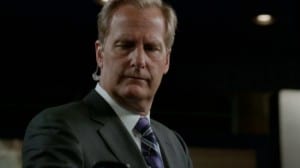 “Hey, I saw Bob today. Yeah, we ate lunch together. It was good to see him.”

“Really? What did you talk about?”

“Uh–I don’t remember. But it was great.”

Has this ever happened to you? This kind of phenomenon happens to me all of the time. (One of my friends posits that this is the hallmark of a great conversation.) Strangely enough, this is how I felt while watching The Newsroom’s “News Night with Will McAvoy.” Well–kind of. I could tell you what transpired over this hour of television, but that doesn’t really seem germane. Where “News Night with Will McAvoy” succeeds is not it’s expositional content, it’s the tone of the episode.

Take, for example, the dynamic between Jim and Maggie. Jim is lingering around Maggie’s computer, waiting for an audio file of George Zimmerman’s police call to download. While he waits, they talk about Hallie and a recent article she wrote about Sandra Fluke. You’ll notice how they don’t really talk explicitly about Sandra Fluke here. As a viewer, you don’t need to know who Sandra Fluke is, because they simply use this as a jumping point for conversation.

“I’m one of the sex people.”–Maggie Jordan

Maggie briefly talks about how she thinks sexism is overhyped and used as fodder for ambitious journalists. She then shifts the discussion into the stigma we give sex as society, how if someone enjoys sex they are labeled as prurient. Jim, concerned about the Africa incident, asks Maggie about her alcohol consumption.

They don’t dwell on any one issue for an extended period of time. Meanwhile, Jim intermittently inquires about the progress of the download. Now I suppose I could dismiss this exchange as superficial, but I don’t think that’s accurate. It conveys to me a sense of realism, a characteristic I would usually never ascribe to Aaron Sorkin’s dialogue (which tends to be quite loquacious and ornate). 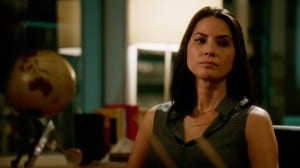 We also have the pairing of Sloan and Don. Don is ruffled after a jocular comment he made is used as a source; Sloan is muddling through the fallout caused by her ex-boyfriend posting risquÃ© photos of her online. Sloan feels this will forever dwarf her life’s work as a reporter. “[Y]ou don’t know their like that until they are,” she explains to an incredulous Don how this occurred. Don wonders how this would play out if the roles were reversed.

Their conversation runs the gamut from humor, flirtation (I challenge any guy reading this review to approach a woman and say, “You’re impressive”), and ultimately morbidity. At one point, as they sit beside to each other on the floor, Sloan intones, “I wanna die.”

What’s important is how she got to that point. She didn’t just blubber on the floor of an office for an hour, blurting out things hysterically. That wouldn’t be true to the character of Sloan Sabbath. Instead, the result is much more authentic.

The bookends of the episode is Will’s show. It starts with the beginning of his program, and ends with the closing. Will is not, however, concerned so much by the content of the broadcast he is putting on. He is more invested in what happens in-between the broadcast: Mac and Neal repeatedly run on the set, vying for his attention. Mac is trying to help Will confront his father’s death, and Neal informs him about a brewing social media imbroglio; Will is more interested in the latter, the prospect of losing a portion of his audience being more consciously pressing than losing his father. (Jeff Daniels, incidentally, was superb in that final shot, sitting lost in thought as the cameras rolled.)

To paraphrase Don’s appraisal of Sloan, I was exceedingly impressed with this episode of The Newsroom. The Newsroom has a propensity to show some of the more manic aspects of the 24 hour news cycle. We’re used to seeing people run around wildly to The Who, putting together a story in the 11th hour.

And as much as I enjoy that, it was very fascinating to see them explore a different tenor. In “News Night with Will McAvoy,” the air was more reflective. It’s actually sort of dark. This is a portrait of an office who–for whatever reason–is slightly disinterested in their overt work. They seem to be more interested in the various side shows and their own interiority.

Sorkin was able to capture this by displaying a lot of restraint. He confidently sat back and let the conversations develop organically, the way they do when we have a difficult time remembering what we talked about with Bob over lunch.