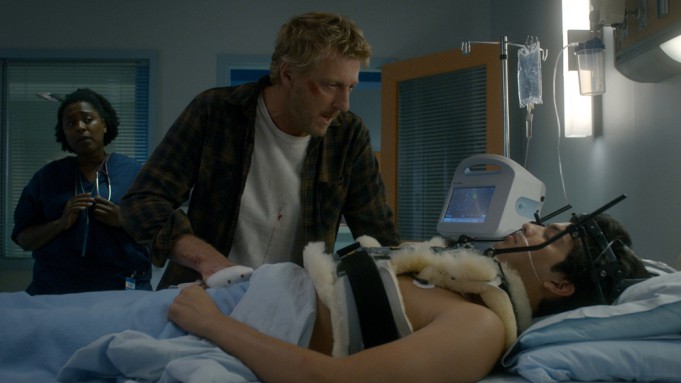 Did anyone else just get chills? The Cobra Kai saga is going strong and even if we don’t get to see everyone we wanted it looks like season 3 is still going to be filled with plenty of interesting sites since from the start it’s obvious that Johnny isn’t giving up on Miguel and it might even happen that Miguel’s mother, Carmen, decides to either forgive Johnny or at least consent to let him hang around her son since he might still have something to teach the kid that could help. From there we go along and find out through hints and images that the Cobra Kai and Miyagi-Do groups are still going to be at odds with each other but can’t really start another brawl for all due to the increased security at the school. That’s not about to stop them from tangling with each other whenever they can since the scene of Demetri taking down Hawk during a soccer match is just further proof that no one is letting bygones be bygones, but the Miyagi-Do students are making it known that they’re going to come out swinging as well. From that point, we get to see Robbie, and it’s kind of evident that things aren’t going too well for him since not only is he picked up by the cops, but he’s sent to juvenile detention where it’s shown that his skills aren’t really doing him any good since he gets the crap kicked out of him.

There’s quite a bit happening in season 3 so far, and even if we’re being fed some of the best parts it does feel as though we’re not being given everything, which is preferable to many people since the surprises to come are hopefully going to be worth the wait. But it does look as though Daniel is going to face down Kreese, who of course is going to be cocky as hell now that he has Cobra Kai firmly under his control again. But it’s been mentioned by some that it would appear as though the dojo has undergone a bit of a renovation, which is easy to see. But who’s funding it? Could it be simply because Kreese has more students now, or is the idea that Terry Silver is funding him and could make a return to the story? We know which answer people would like to see, especially those of us that are all about the old-school cast and want to see as many familiar faces as possible brought back into the fold. But that’s one rumor we’ll have to wait and see about. What is evident is that Daniel’s wife, Amanda, isn’t going to be shy about confronting Kreese at one point, which leaves one wondering just what she’s doing in that dojo and why. Is there a connection between her and Kreese, or is she just fed up with the old man and is a little more understanding of what Daniel and Johnny are trying to do? The trailer is currently raising more questions than we had before, but in a way that’s making people excited to see what the answer could be.

The shot of Okinawa is great since we get to see Kumiko again, and Chozen of course, who apparently has something to tell Daniel about Miyagi-Do that he might not have known to begin. While some people believe that it’s a secret that could help him finally defeat Kreese or something that could help Johnny perhaps, there’s still a lot of mystery behind why Chozen is showing up. It could be that he still wants to regain his honor, if he hasn’t done so in all this time, or simply feels the need to confront Daniel when he hears that he’s returned to Okinawa. Why Daniel even makes his way back to the village is hard to say, other than to try and reconnect with a part of Mr. Miyagi that he has been missing these past two seasons. But it would appear that Chozen is going to disrupt everything he knows by showing or telling him something that will make Daniel question his beliefs and possibly alter the story just enough that he’ll be able to go back with a way to end Kreese’s hold over Cobra Kai and help Johnny to teach his students something different.

There’s still a lot of guessing going on and it’s going to stay that way for a bit until the next season releases in January since what we can tell from the trailer so far is that season 3 looks as though it’s going to be all kinds of awesome and that we’ll no doubt be wanting and hoping for another season when all is said and done. Seriously though, what does Chozen have to teach Daniel that will change things? That question is going to bother a lot of people up until the show releases.