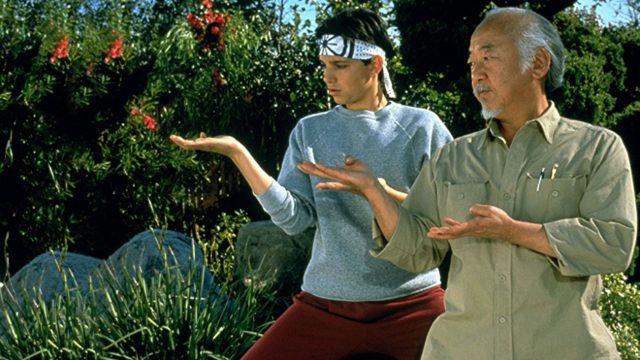 The fact that the Karate Kid YouTube series, Cobra-Kai, is going to be faithful to the original is pretty cool. So far I’ve been on the fence about whether or not this series will really be something worth watching. One would almost think that Johnny might have gone on his merry way and done something greater with his life than the Cobra Kai could offer, but apparently that’s not the direction the writers wanted to use. You might have gotten the idea that being choked nearly to death by his sensei would show him that this wasn’t the best course for his life to take. And let’s not forget he owned up to his loss and was the one to present Daniel with the trophy at the end of the match. This didn’t mean they were friends by any means but it also didn’t mean that Johnny held that much hate for Daniel any longer, at least a lot of us hoped as much.

Thinking about it now though Johnny had a much longer road to walk when it came to changing who he was, and there’s nothing to say that he reconciled with Daniel or Allie and made things right. After all the Cobra Kai dojo was pretty much finished when Kreese was down and out. Even his rich and powerful friend couldn’t muster enough interest to get it going again. But this far into the future you would still get the idea that Johnny might have figured out his life and what to do with himself instead of fixating entirely on the Cobra Kai dojo and Daniel Laruso. At this point and time it almost feels like he should be doing something more constructive than digging up old feuds.

The series is set to run however and will be coming soon enough. Fans of the original films might want to tune in to see how this develops and whether or not it’s really worth of following one of the greatest movies of all time, or they can sit at a distance and just rehash the old memories of a movie that critics tended to think was mediocre to just bad. I know, that seems like blasphemy right? Who listens to critics anyway, The Karate Kid was one of many films that we as kids idolized and watched over and over and over again. To think that they’re going to bring it back tends to fill some with excitement as well as a bit of trepidation since it needs to be handled in a way that will show respect for the original film but still offer something new that deviates just enough from the original formula. After all no one wants to see Johnny beat up on Daniel mercilessly again, especially since Daniel is a trained fighter and has taken down someone tougher than Johnny in a death match.

But seeing Cobra Kai brought to life and watching Daniel try to cope with the loss of Mr. Miyagi should add a bit of pep into the story that might make it worth the effort.