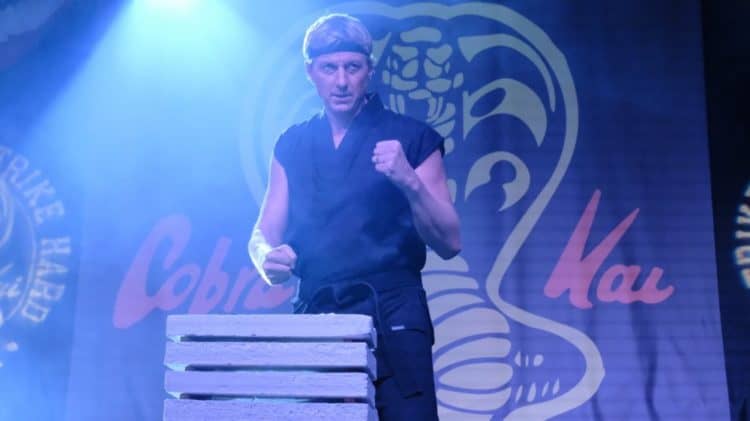 Was it even possible to love this show any more than we already do? Why yes, yes it was apparently. The bloopers to this show are just as great as the show itself since it reminds us that things do happen on set and people screw up from time to time. Hey, as Ralph made it clear, Monday’s aren’t perfect even in show business. What the bloopers also show us though is that the cast is pretty close despite the fact that their characters are at constant odds with one another, and they do tend to have a lot of fun and laugh a good number of things off. One thing that is pretty interesting and is seen in a lot of blooper reels is that by no means are all the actors skilled at pretty much anything they do. That’s shown by the fact that Mary Mouser, aka Samantha LaRusso, really isn’t that adept at skating, or even holding herself upright. That’s something that might have appeared kind of odd back in the day when rollerskating was still fairly popular, but as of now, it’s an indication that things have changed in a big way and the favorite pastime of so many isn’t shared by everyone. Oh well, at least she managed to get the take right eventually, but one does have to wonder just how many takes were required.

The best part of the bloopers is that it’s obvious that even if there are off days that the cast is having a good time with this series, and the results have been great since people have responded in a big way to the continued rivalry between Daniel and Johnny. It’s also easy to see that people have really responded to the fact that Johnny is no longer seen as the antagonist since his redemption arc has been difficult and is still underway, but has been pretty obvious. In the first season, it could be seen that he started out as a miserable individual that didn’t care much for anyone else, and might not have even bothered with Miguel since he saw him as little more than a wimp. But when his arc really started we found out that Johnny didn’t have a stable male role model growing up, and this in turn led him to John Kreese, who was the worst role model possible. We all know what happened after that, but the fact that he finally pulled away from Kreese was meant to be a ray of sunshine, but years later it turned out that he’d somehow become lost in the past and hadn’t found his way forward yet.

One could still argue that Johnny was content to stay lost for a while since he knew absolutely nothing about the internet and as a result hadn’t moved forward with the rest of the world. But once he started coming around he also started learning just why the lessons he’d taken from Kreese weren’t all that great. The downfall of his redemption though was that he was teaching kids that hadn’t yet reached that point and were enamored of the power he was giving them to fight back. It’s harder for kids that have been picked on their whole lives to turn the corner and realize the responsibility that comes with the potential they were given when the desire to see their bullies humiliated and beaten, as they were, is still such a strong motivator. The big hope is that in season 3 the current Cobra Kai will start to realize that John Kreese isn’t the best instructor in the world and that Johnny was trying, in his own way, to teach how to defend themselves, but to do it with a bit of self-respect.

So far the show has been great since it’s been a throwback to a time when a lot of us were watching the movie for the first time and seeing Johnny through a very different lens. The emergence of his stepfather as the jerk that helped push him to Kreese was an interesting and very useful idea, and showing Johnny as someone that had never moved on was equally intriguing. The fact that Daniel has become kind of a jerk since he can’t let the past die either is another great move, and at this moment there really hasn’t been a coup de grace, but there have been several pivotal moments such as Miguel being injured, Kreese taking over the Cobra Kai, and Daniel realizing that his and Johnny’s feud has been adopted by their students. Likely as not we’re going to see another blooper reel in the future and it’s bound to be just as funny as this one since the cast members are obviously having a good time with it and enjoy telling the story.